Mild and wet for for most of fall and early winter, the weather in the Twin Cities turns mega-brisk Sunday, with a high of zero just in time for the Seahawks Vikings game. 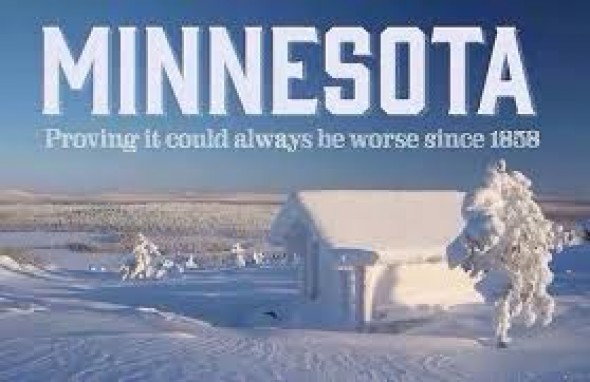 No truth to the rumor that the Vikings QB has changed his name to Teddy Frozenwater.

Just in time for the playoff game Sunday between the Vikings and Seahawks, Minnesota  will become Minnesota. Sorta. The latest forecast calls for a traditional three-dog-night experience — a high of zero, and a low of minus-11. But little or no snow.

After a fall and early winter of unseasonably and unreasonably mild temps, the upper Midwest will go full Arctic blast, as TV newsers like to say, in time for the noon CT (10 a.m. PT) Sunday kickoff.

The football gods truly wish to test the Seahawks. / Weather.com

Before the games Sunday settled the NFC playoff seedings, there was a general belief among fans that since the Seahawks would have to play on the road anyway, it didn’t much matter which destination among Green Bay, Washington and Minnesota the Seahawks drew.

Now playing in the nation’s capital, which would have happened if the Seahawks had been the No. 5 seed instead of No. 6 seed, looks good. Sunday’s forecast for Washington D.C. calls for 53 degrees and rain. Or as it is called in Seattle: Beach weather.

The Seahawks undoubtedly will say it makes no difference to them: The field is still 100 yards, it’s the same for the other guys, yadda yadda bleepin’ yada. And cold can be dealt with more easily than snow/ice on the field.

But zero is zero, people. Things change. The footballs may deflate a little, although that really is an AFC thing.

As longtime fans know, weather-impacted games are often highly entertaining, which the NFL loves. Hey, the game might even crack the top 10 list of coldest games, photos and data for which can be found here, including one of a youthful Mike Holmgren.

It’s always said that inclement weather is an equalizer for teams of lesser physical talent. Maybe true, but there’s this: Second-year Vikings quarterback Teddy Bridgewater was born and grew up in Miami, then spent four years of college in Louisville.

Between zero and Seahawks DE Michael Bennett, it likely will not be fun for the youngster.