Seahawks’ Lynch back, ‘as selfless as they come’

Marshawn Lynch returned to practice Wednesday. Lynch is a revered figure in the locker room, so there was no second-guessing his decision to rehab in Oakland with trainers he knew. 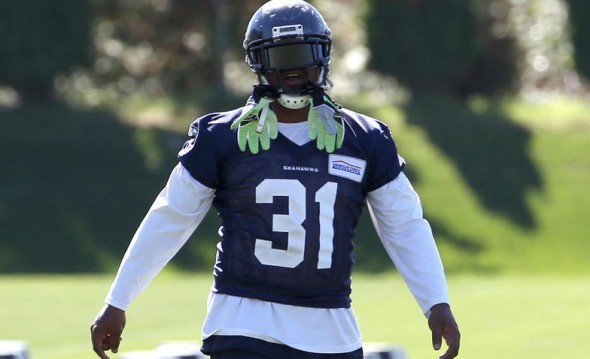 Remember this? Marshawn Lynch wore Kam Chancellor’s jersey to practice one day as a symbol of solidarity during his teammate’s holdout at the beginning of the season. Another reason his teammates like him. / Seahawks.com

RB Marshawn Lynch was back Wednesday, bopping around the locker room, gabbing with ESPN’s Kenny Mayne, chuckling with John Nordstorm, cranking up tunes and generally looking as if he had been nowhere near a surgeon’s scalpel in a long time.

And yes, he squeezed in a practice. A-Beasting, the Seahawks shall go Sunday in Minneapolis.

Said line coach Tim Cable: “He’s been fantastic.” But is he any different?  “Yeah, he’s got a few more jokes than when he left. So it’s good.”

Something about Lynch’s personality elevates everyone around him. The  notorious resistance to daily questions from media is simply a ruse to get more time to hang with people he trusts, needs and helps.

“It’s always good to get him back in the building,” Sherman said. “His energy, his spirit. He’s a fun dude to be around and guys are happy to see him. Happy to see him back out there doing what he does.”

Beyond personality, teammates have more respect for him than anyone else on the roster because he so willingly gives his all.

“The man in the mirror,” Sherman said when asked what drives Lynch. “At the end of the day, I think he wants to be able to look in the mirror and be able to say, ‘I gave my all. I went out there and put on as much as I could for my teammates.’ That’s the kind of guy he is. He doesn’t seem like that to some people, because they have no idea who he is because he doesn’t want to talk about it.

“He’s a guy that is as selfless as they come.”

Lynch’s decision after his Nov. 25 abdominal surgery to stay away from Seattle and rehab near his Oakland home with trainers he has worked with for years struck some as dubious. But none of them are his teammates or coaches.

“Guys don’t worry or stress about Marshawn not being here when he’s rehabbing or when he’s hurt,” Sherman said. “I think the outside world is like, ‘What’s going on?’ We don’t panic. We know that guy is one of the best teammates you would ever have, playing for any team, any level, any sport.

“He will do whatever he can to help this team win. You know he means no ill will. He’s not trying to hurt the team when he’s gone, so you understand and appreciate it.”

Since he was a full go in Wednesday’s practice, the plan is to give Lynch the ball is usual 20-25 times a game.

“If he’s going, that’s what I would expect,” said offensive coordinator Darrell Bevell following practice. “I expect him to be full go, full speed and just do like we normally do.”

Apparently, that means no training wheels in his first game action since Nov. 15.

“He’s adapted very well,” Cable said. “I think he’s done a great job of recognizing where this team is at, and their vibe, and he’s come right in and went to work. It’s been really good.”

Lockett sits out while others return

Besides Lynch, SS Kam Chancellor was also a full participant in practice, meaning they are ready to start Sunday’s playoff game. But a surprising absence was WR Tyler Lockett, who rested with an unspecified hip problem.

Only Lockett, who played all of the Arizona game, and DL Michael Bennett (toe) were held out of practice. Bennett’s toe has been a chronic problem unlikely to keep him out Sunday.

Carroll said before practice he expected the team to be almost totally healthy.

“We have a lot of guys returning to practice right now,” he said. “Sweezy comes back, Luke comes back, Russell Okung comes back to get some work. It’s a real boost for us with the guys coming back, if they’re able to get through the week.”

For the Vikings, RB Adrian Peterson did not practice for the Vikings Wednesday due reported back spasms. He has missed Wednesday and Thursday practices the last few weeks and has played on Sundays.