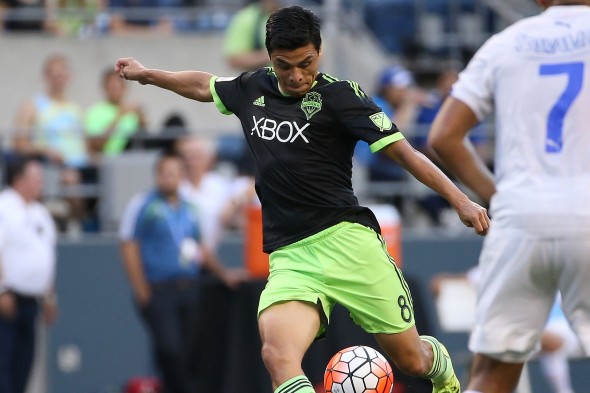 Former Seattle Sounders midfielder Gonzalo Pineda, 33, announced his retirement from professional soccer Thursday. Pineda was one of nine Sounders released by the club after it crashed out of the playoffs in the conference semifinals, and spent the past two years in Seattle after a lengthy career in Mexico’s Liga MX. Also Thursday, the Sounders signed former Jackson High School star Jordan Schweitzer, 21, to a Homegrown Player contract.

Pineda scored three league goals during 53 appearances with the Sounders, usually occupying a defensive midfield role where he paired up with Osvaldo Alonso. Noted for his toughness and hard-nosed tackling, Pineda was an anchor point in front of Seattle’s back line.

The Mexican midfielder’s most memorable moment with the club would prove to be the final goal of his MLS career. During a 2015 road game against Vancouver that decided the Cascadia Cup, Pineda banked a long-range shot off the left goal post and into the net in the 71st minute to help the Sounders to a 3-0 victory and their lone trophy of the season.

Coach Sigi Schmid thanked Pineda for his time as a Sounder.

“It was a pleasure coaching Gonzalo Pineda the past two years and he was an integral part of our team,” said Schmid in a club statement. “He is a true student of the game and I wish him well as he embarks on the next phase of his journey.”

At the same time as the club wished Pineda well, they took a step forward of their own by signing Schweitzer.

Schweitzer, from Everett and a former Sounders Academy player, was a three-time All-Summit First League Team selection at the University of Denver, where he played defensive midfield in a unit that recorded a 0.40 goals-against average in 2015. In high school at Jackson in Mill Creek, he was captain as a junior and earned a first-team All-WESCO selection.

“We’re pleased to add a Homegrown Player like Jordan to our roster for the upcoming season,” GM Garth Lagerwey said in a club statement. “We look forward to continuing to build through the Academy, and we see player development as paramount to our success as a club.”