After a half-season of waiting for Robert Upshaw to play most of the defense, this year’s Huskies are taking steps to make stops on their own. Even if they are nearly all freshmen. 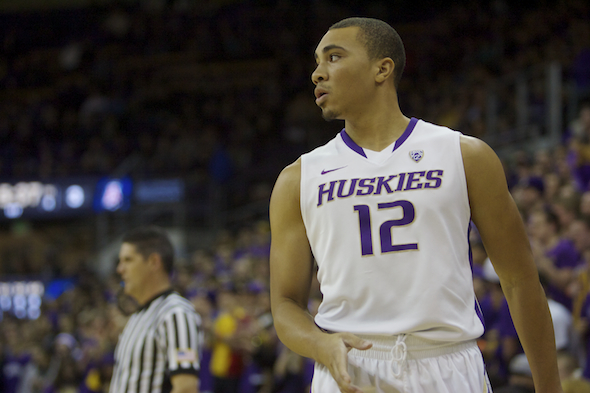 After a pair of dramatic wins during the opening weekend of Pac-12 Conference play, the University of Washington men’s basketball team looks miles different than the program that was 15-16 last season and saw numerous undergrad players leave for what they presumed were better gigs.

Thanks to what coach Lorenzo Romar describes as a return to the program’s focus on defense, his youngsters look to make the Montlake gig work. Romar said defense was the key in the Washington’s comeback against USC Sunday after being 22 down in the second half.

“There’s no question it was the defense,” said Romar Thursday. “It generated the offense for us. We were able to trap. It’s kind of been a pattern for us over the years. When you’re really dialed in defensively, somehow that focus carries over to the offense.”

The conference-leading Huskies (2-0, 10-4) forced 21 turnovers from the Trojans and 25 in a double-overtime win against UCLA. Five times the defense has produced 20-plus turnover games, a feat unseen since the 2009-10 season.

Heading into the rivalry game at noon Saturday against Washington State (1-1, 9-5) in Pullman (Pac-12 Networks), the Huskies’ season total is 250. The team forced 346 all of last season.

“Look at some of our teams (further back), and you’ll be able to make a better comparison,” said Romar. “The last couple years we’ve not had nearly the type of personnel that we have now to be able to play Husky basketball.

“People say, ‘Well, what’s changed?’ Nothing’s changed. This is how we usually play, but the last couple years we’ve had to change  . . . this year is more indicative of how we’ve played in the past.”

One big change in personnel is Malik Dime, a 6-foot-9 forward who transferred from Indian Hill Community College in Iowa. The Senegal native is averaging 2.9 blocks a game. Freshman forward Marquese Chriss has 19 blocks and 16 steals. The two embody the  attitude that Romar looks for.

Senior guard Andrew Andrews said that this defense reminded him of brighter days in the program’s past.

“It goes more to my redshirt year when we were playing up in the lanes, trying to deny, trying to cause havoc,” said Andrews. “I think we’ve been doing a good job of that, just picking up the pace and letting our athleticism take a role.

“When we had (7-foot center Robert Upshaw) down there blocking shots we just stood back and played a pack defense. If they got in the lane, we let them because Rob was just going to hit it off the glass.”

Romar said most freshmen take time getting used to the the demands of defense in college.

“Typically, freshmen don’t understand the level of commitment that it takes,” he said. “They don’t understand how you not only have to work hard every possession, but every pass. It takes some time.”

Andrews knew from the beginning that this group would be different.

“They’re so long and athletic, I wouldn’t doubt they were great defenders in high school,: he said. “Just seeing how athletic they were (at open gym) and how competitive they were, I knew that defense wouldn’t be a problem because they came in wanting to be the best that they could be.”

Andrews would know. He has 22 steals, second behind freshman Dejounte Murray’s 28.

Those are numbers that the Huskies will be happy to point to, if only to keep eyes from drifting toward their 40.8 field-goal percentage.

“(Defense is important) because that’s where you’ve got to lock in and be tough when you’re not hitting shots,” said Crisp. “Stay disciplined on defense. If you’re not going to score, you’ve got to stop them from scoring too.

“When everybody’s playing together,  it makes it tough for a team to do anything.”