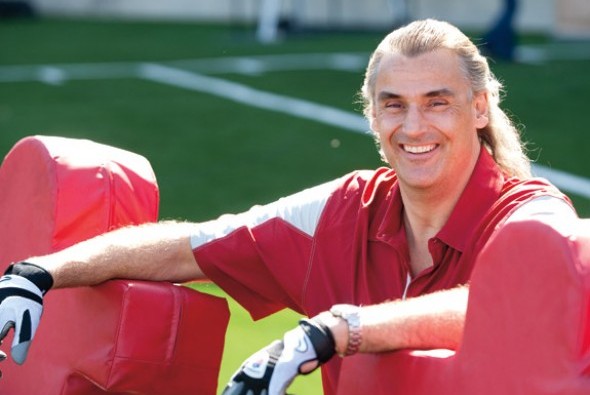 Mike Utley, a guard who earned consensus All-America honors while playing for Washington State (1985-88) University, Friday was elected to the College Football Hall of Fame, only the fourth WSU player so honored. Utley in 1988 helped lead the Cougars to their best record in 58 years and first postseason win (Aloha Bowl) since 1916.

Utley was a three-time All-Pac-10 pick who started a then school-record 43 consecutive games. He played in the Senior Bowl and East-West Shrine Game and was selected in the third round of the 1989 NFL draft by the Detroit Lions.

“I speak for Cougars everywhere when I say how proud we are of Mike receiving this prestigious and well-deserved honor,” said WSU athletic director Bill Moos. “He was a dominating player and truly one of the best to ever play the game. “

Utley played three seasons in the NFL before suffering spinal cord injuries during a game that paralyzed him from the chest and elbows down. After years of rehab, Utley regained the use of his shoulders, arms and hands and partial use of his legs. The Lions renamed their Spirit Award the Mike Utley Spirit Award.

Utley received the Walter Camp Man of the Year Award in 2006 and the WSU Alumni Achievement Award in 2007. Washington State inducted him into its athletic Hall of Fame in 2004.