Thiel: Why Griffey means so much to Seattle

With a police escort from Sea-Tac, Ken Griffey Jr. made it to town Friday night. There were stories, jokes and memories, especially one about and a dad and his boy playing ball. 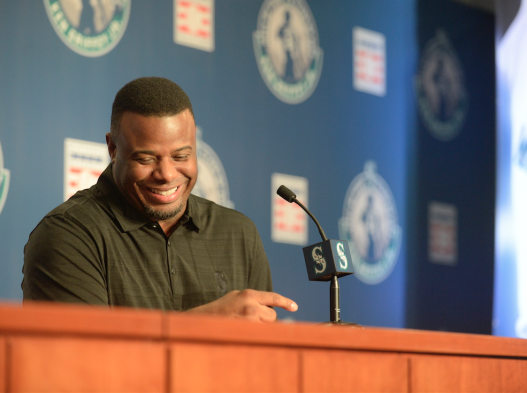 An acquaintance who came to Seattle in 2003 asked me this week, “I know Griffey was a great ballplayer, but what is the deal between him and Seattle?”

She was remarking on the adoration that gushed like abrupt snowmelt around here when word came from the Baseball Hall of Fame that Ken Griffey Jr., had ascended to horsehide Valhalla.

The Space Needle flew a flag in his honor, the Seattle Times turned over page one to him, and Friday afternoon, after his plane from New York arrived at Sea-Tac, commuters northbound on I-5 had to pull over because he needed help to make a late-afternoon press conference. So . . .

His baseball numbers were so splendid that his election was as predictable as Sunday turning to Monday. But that wasn’t the point.

Partly, his achievement was validation for a generation of sports fans who grew up around his 13 major-league years in Seattle. The baseball tradition hereabouts had been two outs and nobody on until Griffey arrived, all smiles, blasts and leaps.

In a concrete shed. On a crappy rug. With a trident logo pointed in the wrong direction, and a for-sale tag perpetually fluttering in the air conditioning.

The other part of it was the six weeks in 1990 that a 20-year-old kid had a chance to play major league baseball with his 38-year-old father, Ken Sr.

It would be easy to write something here like, “You hadda be there.” But no, you don’t hadda. All you have to be is a boy who had a father. Or wishes he had a father.

Among the all-time best sports movies is “Field of Dreams,” whose emotional pivot point was a simple game of catch between son and father.

Imagine that moment playing out in the major leagues for six weeks. Dad hitting second, son hitting third. Both playing the outfield.

Wasn’t done before. Hasn’t been done since. Exactly everyone who caught a glimpse would have given fortunes to trade places.

Among all the highlights, feats, pranks, controversies and mistakes of the Griffey era, the episode was unique, unforgettable and atop his list.

In his press conference that was Griffey at his sincerest and most approachable, he talked about the time together, including the moment when they homered back-to-back in September 1990 at Angels Stadium off Kirk McCaskill.

“He’d sit next to me in the dugout,” Griffey said. ” He’d say, ‘This is your team. I get a first-row ticket to watch you play. I’ve never seen that.’

Next up, Junior’s count ran to 3-0 and he checked the third base coach for a swing-or-take signal.

“I got the green light,” he said. “I looked back for a second. Usually, young hitters don’t get the green light. I hit it out. He made me shake everybody’s hand before he shook mine.

“I sat next to him, and he elbowed me. ‘You know what we just did?’

Well, no, Junior. Everyone who watched it unfold, understood.

Many things great and small passed since that time. Some people will never forgive Griffey for forcing his trade in 1999 and walking out on the team in 2010, plus other assorted dustups in his career. Pile them all up, and they are in the cold shadow of his feats, and that late season of 1990.

It was fleeting, as all things are in a business where everything starts anew in April. But it was not forgotten.

I was supposed to be on my way to Minneapolis now. But when I learned Griffey would be around, I had to stop by, say hello, and hear some stories.

I wanted to answer a question. 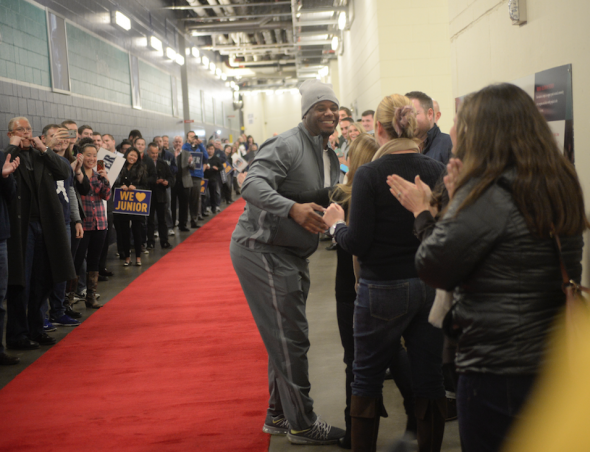