The Seahawks played misrably in near-record cold for three quarters Sunday before pulling off two plays that enabled them to move on in the playoffs against Carolina. 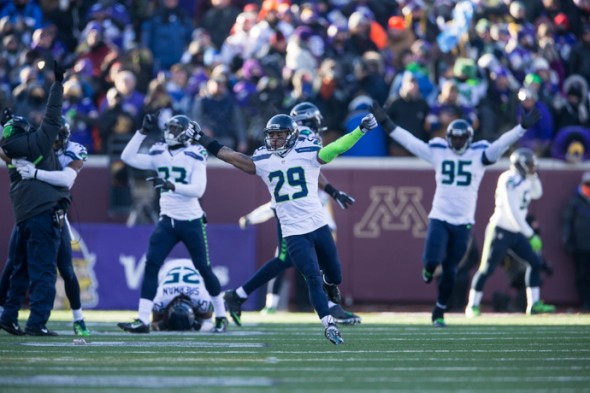 “I didn’t think he was going to make it. I just knew they were going to blow it for us.”

Kam Chancellor might have been the only person  in football America who believed it possible that Minnesota kicker Blair Walsh would botch/scotch/gag a 27-yard, game-winning field goal attempt with less than a minute to play Sunday. But Walsh improbably did, gifting the Seahawks with a 10-9 wild card victory that sends Seattle to the divisional round of the NFC playoffs next Sunday against the 15-1 Carolina Panthers in Charlotte (box).

In the third-coldest game in NFL history —  minus-6 degrees at kickoff and -1 when it ended — the Seahawks seemed on the verge of blowing their sixth fourth-quarter lead of the season when Walsh lined up for what should have been the clincher. Walsh already  gave Minnesota a 9-0 lead on field goals of 22, 43 and 47 yards.

But he got a laces-first look as the ball was placed and hooked it left. Way left. The attempt was not even close, allowing the Seahawks to take one of the biggest knees in franchise history. They escaped the Minneapolis ice cap with a win that keeps alive a third consecutive trip to the Super Bowl.

The game went entirely according to plan — Minnesota’s plan — until early in the fourth quarter. The Vikings used quick, short passes to largely negate Seattle’s relentless pass rush. They has just enough yards from Adrian Peterson, the NFL’s leading rusher, to control the clock.

They forced Seattle into poor field position. They let conditions more suited for penguins to ice up Seattle’s offense until early in the fourth quarter when the game did a 180-degree turn on two plays.

Trailing 9-0 with 13:02 remaining with a first-and-10 at the Minnesota 39, Wilson was caught off guard by a snap.Wilson chased the ball backward for at least 10 yards. Instead of falling on it as most QBs would do, he scooped it up. He somehow evaded a takedown by Captain Munnerlyn, scrambled to his right and spotted rookie Tyler Lockett 15 yards down field. Lockett took Wilson’s pass and burst to the Minnesota 5 before he was dispatched out of bounds.

But even with a 10-9 lead, the Seahawks were staring at defeat when a pass interference call on Chancellor, plus Chancellor’s missed tackle on TE Kyle Rudolph that resulted in a 24-yard gain, helped set up Walsh for the game-winning kick.

“He just hooked it,” said CB Richard Sherman, who had nearly blocked Walsh’s previous attempt. “The football gods were with us today.”

Little went right for the Seahawks. They managed 226 yards, the cold rendering the offense ineffective in the first half when Seattle totaled 86. Wilson threw for 39 on 6-for-11 pass attempts.

While Wilson had a poor game statistically — he completed 13 of 26 for 142 yards, one touchdown and one tipped interception for a rating of 63.3 — he created at least five plays off scrambles that factored into Seattle’s two scores. Almost smeared in the backfield on one of them, Wilson managed to get the ball free to throw out of bounds, saving a 20-yard loss.

“The magic that comes out of him sometimes, it’s unbelievable,” said Carroll “He just does stuff like that. He has the creativity to make something happen when nothing should happen. Because of that, we get out of here with a win and move on to the next game. It’s an enormous accomplishment.”

Wilson had an opportunity for a touchdown just before halftime after a 41-yard pass interference penalty on CB Xavier Rhodes enabled the Seahawks to penetrade Minnesota territory. Wilson took a shot, and Baldwin was well behind the Vikings’ secondary, but the underthrown ball was batted away.

Wilson engineered his fourth fourth-quarter comeback win in the playoffs and 18 overall for his career.

RB Christine Michael, who started in place of the still-injured Marshawn Lynch, ran 21 times for 70 yards — 25 more than Peterson managed in 23 carries for the Vikings.

Baldwin finished with five receptions for 42 yards, none more astounding than his Odell Beckham-like grab with one hand in the third quarter to convert a third down.

DE Michael Bennett received credit for one pass defensed and one quarterback hit, but his game-long dominance of Minnesota’s offensive line was the principal reason the Vikings rushed for only 58 yards, threw for 125 and didn’t come close to scoring a touchdown.The Vikings managed 183 total yards, 3.3 per play.

Seattle recorded three sacks against Bridgewater, one by LB Bobby Wagner, another by DE Cliff Avril, and the other shared by LBs K.J. Wright and Bruce Irvin. Wagner led the Seahawks with eight tackles, six solo.

“The defense was outstanding,” said Wilson. “They made plays and kept us in the game.”

“That (bad) snap was on me. I tried to scoop it up, and then I got up and started running. Sure enough, my man Tyler Lockett was open” — Wilson, on the play that resulted in a 35-yard gain, Seattle’s longest, to set up Wilson’s TD to Baldwin.

“On that play, I was just trying to stay alive. We’ve got a versatile quarterback. Even though we had a bad snap, I tried to stay alive and get open. I tried to get in the end zone, but got caught” — Lockett.

“He (Bridgewater) dumped it low, I saw the ball and got a hit on it. Fortunately for us, it came out” — Chancellor, on stripping Peterson.

“You can look at this game and try to evaluate a lot of stuff, but this was a survivor game. Minnesota did a great job, a fantastic job. Then we had our little burst in the fourth quarter and that made the difference. This was a fantastic finish for us, but I don’t think it’s a measure of anything except your guts. We’re thrilled with that” — Carroll.

The Seahawks kick off in Charlotte at 10 a.m. Sunday.