Pete Carroll says Vikings kicker Blair Walsh rushed his fateful field goal attempt Sunday. The miss allowed the Seahawks to win and the coaches to do a dive into the timing of placekicks. 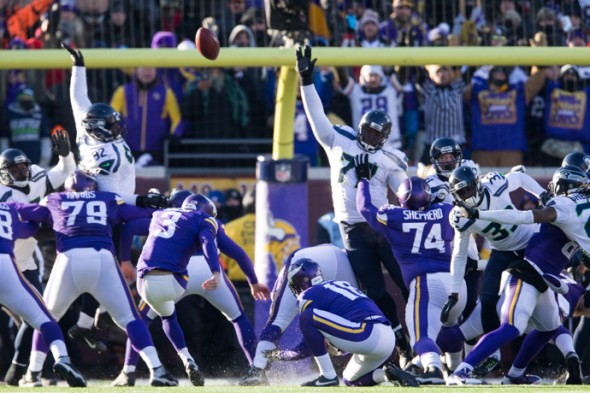 After seeing how excruciating it was for the Seahawks to win their third road playoff game in the franchise’s 40 years — one coach Pete Carroll said, “we’ll never forget” — it is amusing to hear how much thinner was the margin of victory Sunday in the Winter Blunderland than even what was obvious.

According to Carroll, the 27-yard field goal missed by Vikings kicker Blair Walsh in the final seconds that preserved the Seahawks’ 10-9 win was rushed. Carroll didn’t say by how much, but the coaches in film review obviously cared enough to time each Minnesota  attempt on an action that figures to take, at most, two seconds to kick, and probably can’t be done in less than 1.5 seconds.

“I don’t need to give you the times, but it was considerably faster,” Carroll said. “For whatever reason, they sped up their mechanism.”

The theory advanced post-game was the near-block by CB Richard Sherman of Blair’s third field goal that provided a 9-0 lead — Carroll said of Sherman’s charge from the play’s right, “we don’t know how he missed it” — had some impact on the game-deciding attempt.

Walsh’s post-game comments added some vague credence to the theory.

“When you pull it to the left like that, you didn’t stay long enough into the kick and commit through it,” he said. “That’s what I didn’t do. I had done it all day, so I’m not sure why.”

Whatever micro-seconds Walsh shaved from his swing, it only added to the rich afternoon drama of man vs. man and man vs. nature. Twenty-four hours later,  Carroll was still exuberant over the intense win that advanced the Seahawks to the playoffs’ second round Sunday at 15-1 Carolina (10 a.m. PT, NBC), where they are 2½-point underdogs.

“I had a blast,” he said. “It was so much fun, because it was just so crazy. The mental side  everyone was dealing with, to get right to be at their best . . . there was a big energy about it, because the coaches and players didn’t want to succumb (to the cold).

“There was a real uplifted emotion about taking on the challenge, not being overwhelmed.  There was just something about this game that made it really special.”

Or as FS Earl Thomas put it a little less eloquently, “You could see crystals in guys’ snot.”

No clarity on Lynch

Carroll had nothing new to report on the status of RB Marshawn Lynch, which only adds to the mystery of why he didn’t accompany the team to Minnesota after a week of positive reports from Carroll about his return to playing health.

“One day at a time,” he said. “Get him out there practicing and see what that means. We don’t know that yet.”

Carroll did say Lynch did not have a physical setback, which contradicts what Lynch’s agent, Doug Hendrickson, told the Seattle Times Saturday:

“He had a little setback on Friday. Basically a little tweak. And he wasn’t able to go. He’s going to rehab this weekend and hope to hell they win and he gets back next week.’’

Carroll explained after the game Sunday that after Friday’s practice, Lynch said he wasn’t ready to return to play after his Nov. 25 hernia surgery.

“When he went back to his locker and sat down, he just didn’t feel it,” he said. “He didn’t feel like he could go. And that’s it. There wasn’t enough time to build the confidence that he needed to come in and do something.

Monday, Carroll said despite Lynch’s practice activity, which including shooting some hoops Friday at the VMAC, his abdominal core wasn’t ready for football.

“It happens to be right in his core,” he said. “You all have watched him, you know what kind of runner he is, all of the lateral things that he does with his body that are so abrupt. He needs to feel that he can do those things. Even though he can run fast, and looks like he’s moving, he didn’t have the confidence that he could go out there and react.”

Conspiracy theorists are having fun with the notion that there is tension between Lynch and club management, perhaps over whether Lynch will be brought back next year for an $11.5 million hit against the salary cap. The emergence of rookie Thomas Rawls makes Lynch’s return less likely.

So the question could revolve around whether Lynch thinks he can use what could be his last game as a Seahawk Sunday to showcase his return to health, or protect his health by sitting out, knowing there may be no more games this season.

Carroll and Hendrickson say there’s no ulterior motive beyond being healthy. But until he plays, the drama persists. Always good to have subplots this time of year. Right, Peyton Manning?

The Seahawks are 5-2 when being down nine points in the playoffs, while the rest of the NFL is 6-41, something that gets Carroll beaming.  “I didn’t know it (until today), but I couldn’t be more proud of that.” . . . FB Will Tukuafu came out of the game with a hamstring problem of unknown severity, but that was the only casualty other than the looks of P Jon Ryan. He did a face plant after being upended on a first-quarter run following a low snap, breaking his nose. “He’s not looking too good,” Carroll said.  “He’s got a couple shiners. Jon got his face smashed on the turf, nose all over here and over there. They fixed it on the sidelines. They stick the cotton up your nose, and say, ‘Get back in there, kid.’ He went back in and pulled it off.” . . . TE Luke Willson is expected back after a concussion . . . RB Bryce Brown was healthy but did not play Sunday. “We just didn’t get him in,” Carroll said. “We had planned to play him, it just didn’t happen.”

You should see the other guy. pic.twitter.com/VFNSNehcu9