Rams to LA; when they build it, will Carroll go?

The Rams will move to Los Angeles next season. The potential impact for the Seahawks, besides losing a long road trip, is that Pete Carroll has never disguised his affection for LA. 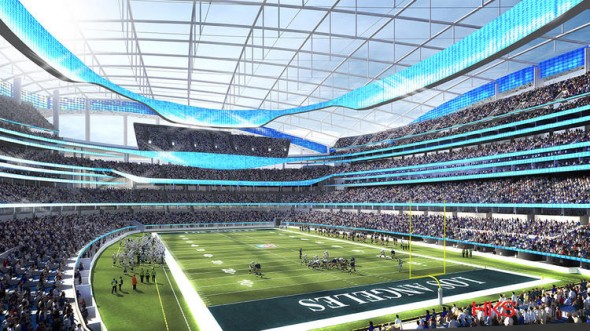 Artist’s drawing of the proposed stadium in Inglewood, scheduled to open in 2019.

National Football League owners Tuesday overwhelmingly approved a relocation plan by the St. Louis Rams to move to the Los Angeles area, which includes building a stadium in Inglewood. The approval also provides an option for the San Diego Chargers to join the Rams if they can reach a lease agreement with the Rams by January 2017.

If the Rams and Chargers can’t work something out, the Oakland Raiders, who left Los Angeles in 1995, will have the option to join the Rams. Both franchises have tried without success to strike deals with their cities to replace the oldest stadiums in the NFL.

The Rams begin play in Los Angeles in 2016, but will not move into their new Inglewood home, a $1.8 billion project on the site of the old Hollywood Park race track largely funded by Rams owner Stan Kroenke, until the 2019 season. They will play in the interim at the Los Angeles Coliseum, their former home. The franchise resided in Southern California from 1946-94 before moving to St. Louis.

A Chargers-Raiders partnership that would have put those teams in a stadium in Carson, CA., was the other proposal under consideration. It drew a modicum of early support from league owners, but ultimately failed to pass.

Had the Chargers and Raiders moved to LA, it would have forced a league realignment to make sure two AFC West teams didn’t play in the same market and in the same stadium.

Such a development could have sent the Seahawks, or another NFC West team, to the AFC West to balance it out. The Seahawks played in the AFC West from 1977-02. Now, there is no need for realignment.

The vote to relocate the Rams to where they were 21 years ago, was passed by a 30-2 margin, but needed the approval only of 24 of the league’s 32 owners.

The Rams remain in the NFC West, meaning that the Seahawks will have one less 10 a.m. kickoff time and one less road trip to the Central time zone. But there is a potential long-term downside for the Seahawks franchise.

One team in Los Angeles, and perhaps a second by 2017, could serve as a lure for coach Pete Carroll to return to Los Angeles, just as his former Trojans assistant, Steve Sarkisian, departed his head coaching gig at Washington two years ago to the take the job at USC.

Carroll, a San Francisco native, coached the Trojans from 2001-09 and won two national championships before moving to Seattle. Even while coaching the Seahawks, Carroll has never disguised his loyalty to the Trojans, nor his affection for Los Angeles.

That’s a ways off. Carroll, who has been in Seattle since 2010, has a year remaining on his contract with the Seahawks, where he works for Paul Allen, the wealthiest owner in sports. The Rams have Jeff Fisher under contract. At 64, Carroll might be working his final coaching job.

If not, one or two teams eager for a splash in the nation’s second-largest television market, where he was nicknamed in his USC days as “king of Los Angeles,” could be a dramatic way to finish up.