When Billy Donovan left Florida to coach the Oklahoma City Thunder, recruit Noah Dickerson withdrew his letter of intent and crossed the continent to find a home in Montlake. 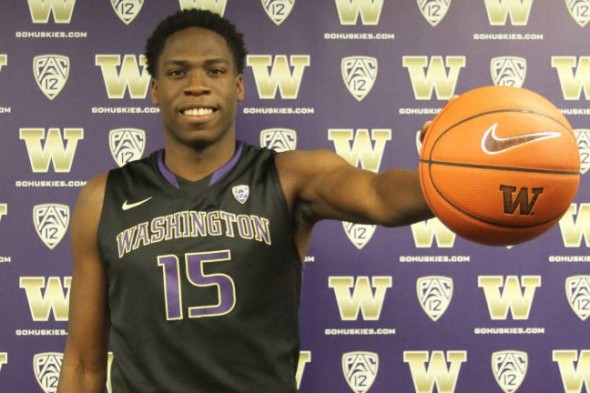 Washington’s Noah Dickerson is a long way from his native Atlanta, but he fits in on the Huskies just fine. / University of Washington Athletics

The University of Washington men’s basketball freshman class has a distinctly local feel to it. Dejounte Murray is from Seattle, Matisse Thybulle is from Issaquah, David Crisp is from Tacoma, and Noah Dickerson is from Atlanta.

While the geography has left some hoops fans scratching their heads, the six-foot-eight, 235-pound Dickerson’s journey from his intended college at the University of Florida to Montlake brought much-needed size, physicality and, to hear coach Lorenzo Romar tell it, smarts to a young team.

Dickerson’s coastal transplant was sparked by Florida head coach Billy Donovan’s ascent to pro basketball. When Donovan announced that he was leaving the Gators to coach the NBA’s Oklahoma City Thunder in April, Dickerson decided, despite a previous letter of intent, that he’d rather not become a Gator.

Dickerson said his decision to come to Seattle started with a recruiting visit during his junior year of high school, despite his unfamiliarity with the Pacific Northwest.

“At the time (of my visit) I had committed to Florida,” he said. “I felt at that moment that it was the better fit for me and my style of play, but when (Donovan) left, the whole coaching staff left.

In Dickerson, Romar gained a four-star recruit, ranked 19th nationally at his position, and fourth in the state of Florida, where he attended Montverde Academy near Orlando, His team twice won the National High School Invitational tournament, a private tournament created by the Paragon Marketing Group in 2009 for the nation’s top-ranked high school teams.

“Noah has one of the highest basketball IQs on our team,” said Romar. “There are a lot of things in the game that don’t quite reach the box score. Against UCLA, he had a huge impact in that game and he didn’t make a shot.”

Dickerson was 0-for-6 from the field against the Bruins, but the freshman recorded 10 rebounds, a block and a steal before fouling out. Against USC, Dickerson similarly struggled to convert, going 0-for-5, but Romar was unworried with the lack of offensive production.

“He went through a period there where the ball wasn’t going in the basket for him,” said Romar. “That’s not uncommon for a younger player, but he is a winner. He won two national championships in high school, he understands what it takes to go out there and be successful on the floor.

“It just so happened that the ball wasn’t going in for him at times for a few games, but I don’t think that takes away from how smart a basketball player he is and how much he contributes.”

Against Washington State Saturday, Dickerson scored 16 points before fouling out.

If Dickerson has a weakness, it’s foul trouble. The freshman has already fouled out four times this season, including twice in conference play. Dickerson’s not alone in that number. The entire front line of Dickerson, Thybulle and Marquese Chriss fouled out against Washington State.

Romar said the problem was a common one for young big men, one that was being focused on in practice.

“Our guys are getting better at not committing some fouls that shouldn’t be committed,” said Romar. “We’re still going to foul. We play very aggressively on defense, but we start over. We go back, we just talk about being in good position.

“Don’t get touch fouls if you’re out of position. You’re away from the hoop? Keep your hands to yourself.”

Dickerson is also focusing on playing defense against bigger opponents than he is accustomed to. He has been on the receiving end of numerous elbows as he battles underneath the boards.

“I like to stick my nose where it shouldn’t go,” said Dickerson. “I’m playing against a lot of bigger guys now, so my face is where their elbows are . . .I don’t like it, I want it to stop, but I keep playing.”

He’s adjusting to the challenge of no longer being the biggest guy in the paint by playing smarter.

Turning disadvantage to advantage is a theme for the Huskies this season. Dickerson turned uncertainty at Florida into a starting role at Washington, while Romar has used youth and rapidly dissipating inexperience to climb to the top of the Pac-12 standings at 3-0 (11-4 overall).

For Dickerson, the road game against No. 18 Arizona (1-2 Pac-12, 13-3 overall) at 6 p.m. Thursday provides a chance to turn around the disadvantage of being so far from home, too.

“Some of my family is coming for the game,” he said. “I’m glad because I get to see my brother again, my mom. My brother told me that it’s sold out, he couldn’t even get a ticket, so he was happy I could get him one.”

As for his play, Dickerson said his next goal is more rebounds.

Asked how he would accomplish that, Dickerson’s reply was simple.

For a Florida kid adjusting to life a continent away from home, some things aren’t complicated at all.