The game Sunday in Charlotte matches the two best teams in the NFL’s playoff field of eight. So let’s just save all the glitter and hype and call this Seahawks-Panthers the Super Bowl. 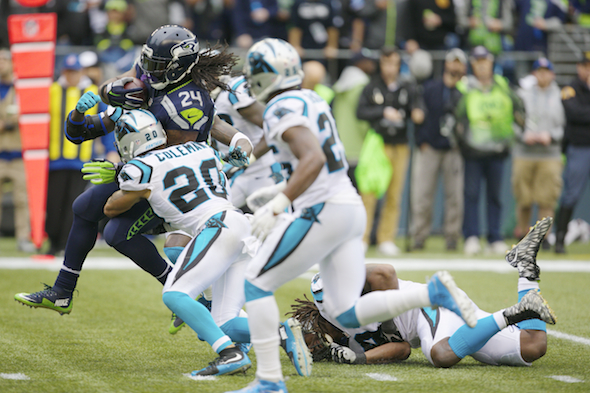 Marshawn Lynch had 54 yards in 17 carries, including a one-yard touchdown, the Seattle’s 27-23 loss at home to Carolina Oct. 18. / Drew Sellers, Sportspress Northwest

Perhaps in the confusion this week about NFL relocation to Los Angeles, you may have missed news of another relocation. Super Bowl Bowl 50 has been moved. To Charlotte. Sunday, 10 a.m. PT (FOX).

The match doesn’t have the hype, glitter, tassels and stripper poles that typically identify the traditional Super Bowls. But the Panthers and Seahawks are the two best teams in the field, and they play Sunday, not Feb. 7 in Santa Clara. Right?

It’s the NFL’s marquee matchup this season. The 15-1 challengers against the two-time NFC heavyweight champions. Everything else? Lounge acts. Kenan Thompson warming up the crowd for Chris Rock.

“That’s how I look at it,” said Seahawks TE Luke Willson, “as far as as the way we finished off the season, and the way their entire season went.

No other teams in the NFC, not even Arizona, are of the same pedigree. Should the Seahawks and Cardinals, who host Green Bay Saturday, prevail this weekend, they will meet in the NFC Championship.

The AFC usually has a case with New England that every postseason game is a Super Bowl equivalent. But the defending champs, damaged by injuries, have lost four of their previous six games. Even coach Bill Belichick had a black eye this week. The rest of the AFC field has more question marks than exclamation points.

Carolina and Seattle are the best teams. That’s it. Move the Super Bowl’s hyperventilated halftime show across the country, and let’s get it on.

The edge for this game was set with Carolina’s win over Seattle. It looked to some then to be the final blow to the teensy dynasty begun by the Seahawks under coach Pete Carroll. Nice run — his eight postseason wins are one more the franchise accumulated in its history before his arrival — but at 2-4 this fall, the Seahawks season looked cooked.

“They had some great plays,” said DE Michael Bennett, attempting to explain what happened that day. “That’s a 15-1 team. They’ve got great players. We learned from our mistakes. We’re not the same team we were.”

Bennett begs to differ about whether there has been a change in NFC leadership.

“You can never count anybody out in the NFL, especially at mid-season,” he said. “At the beginning of the season, everybody seems like a Super Bowl contender. Got to let the season unfold. When you do, you see the same teams back every year. It’s not a surprise.

“Those teams seem to take hold of a season as it goes. I think we’re one of those teams that develop. We keep going on and on.”

Coach Pete Carroll admitted recently that getting over the devastating loss in the Super Bowl took a long time. Equally vexing was the inexplicable contract holdout of SS Kam Chancellor, who missed the first two games. Because of injuries, FS Earl Thomas missed the entire preseason. And Bobby Wagner, who joins Carolina’s Luke Kuechly as the game’s best middle linebackers, missed the Panthers game with injury.

Those travails explain much of why the Seahawks defense in the early season gave up 34 points to the Rams, and 27 each to the Packers, Bengals and Panthers.

Because those matters are resolved, and Jeremy Lane has returned to health to fix the weakest defensive position, the cornerback spot opposite Richard Sherman, the Seahawks make the argument that the current outfit is not the same as the group that blew a 24-13 fourth-quarter lead.

“Those guys are critical pieces to who we are,” said defensive coordinator Kris Richard Thursday. “It’s the relationships, the camaraderie, the experiences and what they’ve been taught over the years — you lose a little of that each time they’re not out there.

“Sure (their absences) made a difference. Now that we’re all here, it matters nothing.”

Well, it did matter for playoff seeding. The Seahawks’ 2-4 start cost them a shot at the division championship, meaning no home postseason games and no bye, big advantages they had the two previous seasons. So they have to win three road games in a row to reach the Super Bowl, after winning just two road playoff games in the 39 previous years of the franchise’s existence.

But after barely surviving the most frigid game in the history of Minnesota, where cold was invented, the Seahawks see a trip to North Carolina and think about taking golf clubs (forecast: 47 degrees, 20 percent chance of rain). That, plus the fact that they have won six road games in a row, as well as the past three games they’ve played in Charlotte, suggests that they are not intimidated by surroundings or circumstances.

The Seahawks go from frigid to formidable: The foe is a 15-1 team that topped the NFL in turnover ratio and is led by the NFL’s Most Valuable Player-presumptive in Newton.

“It’s what America wants to see,” Bennett said. “They want to see two teams go out and heavyweight-fight it — Mike Tyson, (Evander) Holyfield.”

There you have it — the real Super Bowl. Throw in the forecasted return from hibernation of Seattle’s Beast, Marshawn Lynch, and the NFL can put up the “Closed” sign on Levi’s Stadium in three weeks.