The Sounders traded a first-round draft pick for left back Joevin Jones from the Chicago Fire. In the second round, the Sounders drafted defender Tony Alfaro and midfielder Zach Mathers. 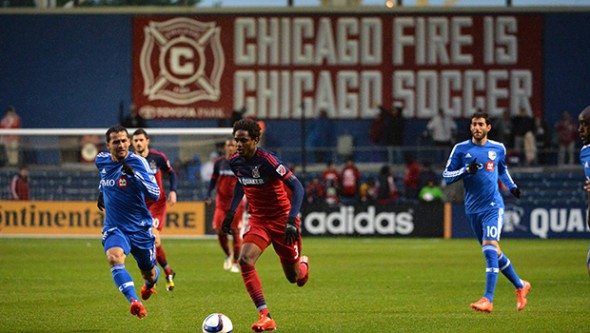 The Sounders acquired Joevin Jones from the Fire in exchange for a first-round draft pick and allocation money. / Chicago Fire

The Seattle Sounders acquired three players as a part of the MLS SuperDraft Thursday. The Sounders traded their first-round pick and allocation money to the Chicago Fire, acquiring 24-year-old left back Joevin Jones. In the second round, the Sounders drafted center back Tony Alfaro and midfielder Zach Mathers.

Jones, a Trinidadian national, started his pro career in the TT Pro League with W. Connection, landing in Chicago after a short loan to HJK Helsinki. Jones made 28 appearances  for the Fire in 2015, scoring one goal.

“We are excited to add a player of Joevin’s caliber to our roster,” said Sounders GM Garth Lagerwey. “Making our roster younger and faster has been a priority for the club this offseason, and acquiring a player like Joevin fits that bill.”

Jones has 37 caps for Trinidad and Tobago, including 2013 and 2015 trips to the CONCACAF Gold Cup.

“Joevin is a player with speed and versatility that can come in and help our team,” said  coach Sigi Schmid. “He played well for Chicago this past season and we look forward to seeing what he brings to our roster.”

Seattle already owned Orlando City’s second round pick and used it to select Alfaro from Division II Cal State-Dominguez Hills. Alfaro, a Santa Barbara native, was a named a first-team All-America by the National Soccer Coaches Association of America (NSCAA), started 21 games as a senior and was named the California College Athletic Association’s defender of the year.

“On an organizational basis we really wanted to get deeper from the center back position,” Lagerway told reporters. “We got a left-footed center back, which is a little bit harder to find; a kid with good feet, good size, and real potential.”

Mathers, a 5-foot-11 midfielder from Keller, TX., started all four years of his collegiate career at Duke. Mathers notched eight goals and eight assists as a senior for the Blue Devils to earn a spot on the All-ACC First Team.

“He’s a very smart soccer player, a good reader of the game, another good technical player, that played a little bit further forward in college but we might project him to play a little bit deeper in midfield as a pro,” said Lagerway.

Of the three, Jones will be an immediate contributor. His speed and experience at left back will make a strong case for him to become the starter over Oniel Fisher and Dylan Remick, who alternated through the spot in place of an injured Leo Gonzalez last season.

The draft selections were characterized by Lagerway as picks for the future, to flesh out Seattle’s farm system.

“The most important message I can give is that playing for S2 is not only not a problem but it’s an opportunity,” he said. “It’s an opportunity for these kids to show us what they can do, get in games on a regular basis, while potentially training up with the first team.

“These guys will go in to our farm system and we’ll see how quickly they advance.”

Still, Lagerway said that everyone would be on equal footing as the players reported to spring training camp.

“We’ll go down to preseason and they’ll tell us,” said Lagerway. “The players make the decisions, we’re going to give all of these guys a fair shot. I think you’re going to see us have a large number of young players, and we’re going to give everybody a chance and see where it shakes out.”

On the whole, Lagerway said that the team he expects to use next season is, at this point, assembled.

“What we want is competition for positions all over the field. No one has been handed anything,” he said. “We have some guys have the potential and the capability of starting going forward on Feb. 23 against Club America. We’re pretty much covered in a positional basis all over the field.”

The Sounders will use early February to play three friendlies in Arizona against the Timbers, Whitecaps, and Mexican Celaya FC in preparation for its CONCACAF Champions League, two-legged knockout match against reigning champs Club America on Feb. 23.

MLS commissioner Don Garber took the opportunity of the SuperDraft to weigh in on Jordan Morris’ professional future. Morris, a Mercer Island native and a Stanford star, just extended his training stint with the German Bundesliga’s SV Werder Bremen, and has been praised by the team’s front office.

Garber, who has butted heads with USMNT coach Jurgen Klinsmann over whether American talent should play domestically or go abroad, said he hoped to see Morris in Rave Green.

“We very much believe that our league provides players with a great opportunity and today more than ever before to begin their careers,” Garber said. “And some people come back at the conclusion of their careers, to make a good living, be trained well, have fantastic facilities and, in the case of Seattle, play in front of 45,000 fans, which is among the best in the world. Our goal is to do everything we can to have these players — as we’ve said many times before — see MLS as a league of choice, and we do everything we can to make that happen.”

Keffeler, a former player in the Legends Football League (better known by its previous name, the Lingerie Football League) for the Seattle Mist, may have her Miss Washington title revoked after news in April that she was arrested in April for DUI. Keffeler’s blood-alcohol content was allegedly three times the legal limit.

Pappa, who served a league suspension of his own after a DUI arrest in July, was reportedly found with Ms. Keffeler by police with a stab wound in the abdomen in a South Lake Union apartment before being rushed to the hospital for surgery.

King 5’s report said Keffeler and Pappa repeatedly changed their stories regarding what happened, and that the investigation is still on.

Pappa was acquired by the Colorado Rapids after he was waived by the Sounders.