Carroll: Lynch is a go for the Seahawks Sunday

Unless there is some bizarre development between now and Sunday, Marshawn Lynch is expected to start for the Seahawks when they face the Carolina Panthers. 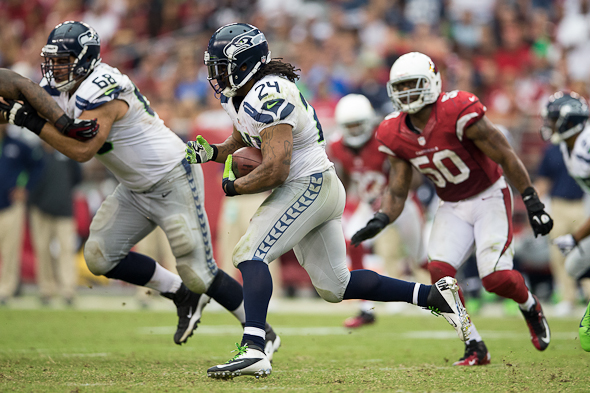 Unless there is a setback between now and Sunday’s 10 a.m., PT kickoff, Marshawn Lynch will start for the Seahawks when they face the 15-1 Carolina Panthers in an NFC divisional playoff game at Bank of America Stadium. Unlike last week, when Lynch suddenly bailed just as the Seahawks were about to depart for Minnesota, Lynch Friday accompanied the team to Charlotte.

“He packed his bags and he’s with us,” coach Pete Carroll said before buses  departed the team’s facility in Renton. “There is a really good chance he’ll go Sunday. He had a really great week, he really did. He was more explosive this week than last. You can see that he made improvement.”

If Lynch plays against the Panthers, it will mark his first game action since Nov. 15 when he rushed for 42 yards on eight carries against Arizona. Lynch underwent abdominal surgery Nov. 25 in Philadelphia and has spent most of his time since rehabbing in San Francisco.

Carroll thought Lynch might be able to play Sunday against the Vikings in Minnesota, but Lynch wasn’t ready and stayed home as the Seahawks eked out a 10-9 victory.

“We’ll see how he responds one more time (Saturday) and make sure that everything is okay,” said Carroll. “But all indications are that he is in good shape to go.”

Carroll said that the added week of rest/rehab made a significant difference in Lynch’s readiness for the Panthers, the NFC’s No. 1 seed. He is officially listed as probable.

“He’s really pumped to play football and play with his team,” said Carroll. “So I’m looking forward to him playing like he has in the past. We’ll make sure and watch and see how he’s doing and how much we can play him. We’ll figure that out as the game goes along.”

Lynch played in seven games prior to his injury, rushing for 417 yards on 111 carries with three touchdowns. In the game against Carolina Oct. 18, Lynch ran for 54 yards on 17 carries and scored on a one-yard run.

The Panthers are a 2½-point choice. They defeated Seattle 27-23 in Week 6 at CenturyLink Field with quarterback Cam Newton directing two fourth-quarter scoring drives after Seattle mounted a 23-14 lead.

Carroll also said that TE Luke Willson is likely to return after suffering a concussion, but that FB Will Tukaufu is doubtful with a hamstring. Otherwise, Carroll said, the Seahawks are as healthy as they have been in a long time.

“It’s an awesome sign for us,” Carroll said. “We’re ready to go crank it up with all hands on deck. So it’s exciting.”