Thiel: After a long run, Seahawks wore down

The Seahawks have had a four-year run of high-intensity playoff games. It seemed Sunday that the emotional toll left them vulnerable to a Carolina team on the ascent. 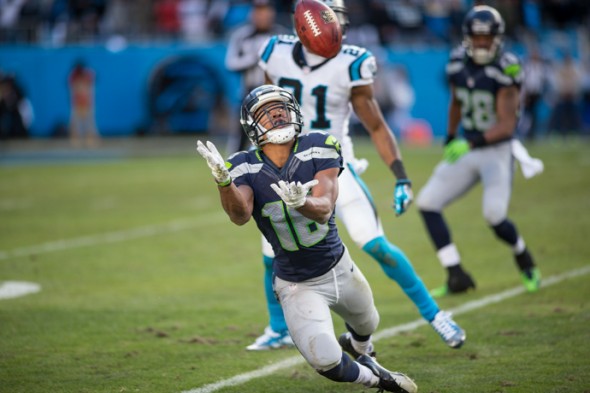 Talking to players in the Seahawks locker room in Carolina Sunday after the 31-24 defeat that ended the season, I was struck by how ordinary was the scene. Maybe that’s because the previous two seasons ended at Super Bowls with extreme outcomes: Jubilation over a conquest and shock at the loss of certain victory.

Players Sunday were mostly matter-of-fact. No anger, no weepiness, plenty of disappointment but no lamentations on a grand opportunity squandered. Even a few laughs.

Stunned by a poor start and proud of a credible finish, they knew they were beaten by a better team, and said so.

The NFC divisional was the 10th postseason game in four years, a remarkable collection of dramas in which they went 7-3. It was also a third consecutive road game, and the first one after the subzero fracas in Minnesota, which seemed to take a toll beyond an ordinary game.

Compared to the ferocity displayed by the Panthers, the Seahawks just didn’t have it at the beginning. That is no slight suggesting a lack of will. They simply played without the usual edge, as if worn down — until they became embarrassed.

And it’s true that QB Russell Wilson recovered smartly from his dismal first half to throw three touchdown passes, including one sublime (33 yards to Tyler Lockett) and one ridiculous (a three-yarder to Jermaine Kearse after escaping two sacks while falling down and backed up nearly to the Outer Banks).

So feats were accomplished.

But beyond parsing plays for individual mistakes, and knowing that the Panthers throttled back after their 31-0 lead that helped permit a rally from a proud team, it’s fair to wonder whether the intensity, hyperbole and money that swirls around the NFL’s most celebrated team the past three seasons does exact a toll.

Especially after the most devastating single-play loss in Super Bowl history, a loss so powerful it shot through much of the 2015 season and cost them a chance at the NFC West title.

In his final presser of the season Monday, coach Pete Carroll again said, despite the early season denials, the baggage was considerable.

“I was trying to not bring it to light any more than I had to,” Carroll said. “I was working with it the whole time. This was no surprise. I continue to remind you guys that it’s the same kind of bulk issue that you have to deal with when you win too. You still have problems and concerns that serve as distractions that you have to push aside. We’ve been through it.  We’ve learned from it, and our players know. We were actively working to clear our minds, it just took a while.

“We have to put it behind us. Otherwise, you’re distracted, and your performance comes out less than everything that you have.”

Few players will admit to distractions diminishing performances, but the first half Sunday spoke to a team not fully engaged.

I doubt any of them were thinking during the game about the Minnesota ordeal, much less four years ago when Atlanta knocked out Seattle at the same stage of the postseason. I also doubt they were concentrating sufficiently on the task at hand.

“We get (part of) a January off, first time we’ve had a January off in four years,” he said. “It’s an extra amount of time for our bodies to recover, for our mental states to return to normal, to kind of balance out.

“I believe that will give us an edge coming into the off-season program, and getting ready for next year.”

Think about the most recent three playoff games: The NFC Championship against Green Bay started out with the Seahawks trailing 16-0, the Super Bowl had New England ahead  14-7, and a week ago the Vikings started 9-0. The last non cliff-hanger playoff win was 31-17 a year ago against Carolina.

Carroll was asked more specifically about the effect of the hangover, and responded with his caveat that it’s actually been two years in row.

“I’m going to keep saying, ‘after both Super Bowls,’ so you guys realize it’s not just because you lose, it’s when you win too,” he said. “It’s difficult.”

Some of the difficulty manifested Sunday. The fire went unlit.

The good news for the 12s: No hangover next fall.