Sounders’ Morris: The next Landon Donovan?

Mercer Island’s Jordan Morris went against the historical trend of young American soccer stars. He passed on an offer from a European team to stay home with the Sounders. 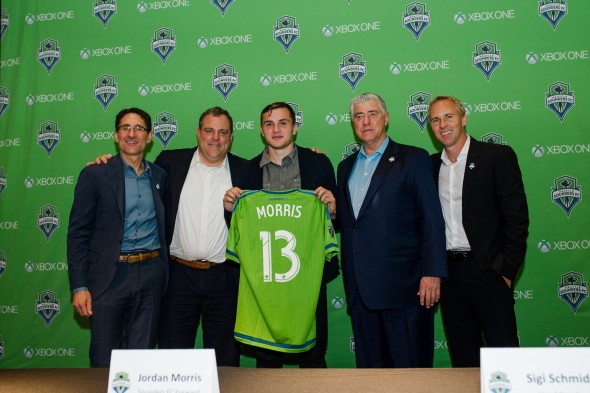 The Seagull has landed; the Kerouac-esque Wanderer has found himself and returned. Seattle’s favorite soccer son came home.

The Sounders made official Thursday what the team hoped for since Jordan Morris finished his freshman year at Stanford — the Mercer Islander signed a Homegrown contract.

Morris, 21, returned to Seattle after he made it clear to Germany’s SV Werder Bremen he wanted to play in America.   His arrival was heralded by majority owner Adrian Hanauer as a big day not only for Seattle.

“If we’re doing what’s right, and putting the Sounders in young players’ hearts, then those heartstrings are tough to break. A player weighing his options leans towards signing with the Sounders.”

The Morris signing is a coup for the domestic league. In the past, American players that had a sniff of interest from European clubs were gone in a moment’s notice. The battle rages with young talent today, especially with USMNT coach Jurgen Klinsmann making no secret of his desire for younge players to play abroad where the leagues, on the whole, are more competitive.

For his part, Klinsmann told ESPN that he was pleased that Morris, a rising star on the men’s national team with seven appearances and a goal since his first call-up in August 2014, wound up in Seattle.

“I’m thrilled that Jordan decided to go pro,” he said. “This is the really important decision. And I’m thrilled with the Sounders, that he goes into an environment that he knows, that he feels comfortable with, and that he feels now that, ‘At this specific point in time, this is the best move for me.'”

Klinsmann will also be happy that Morris is playing under coach Sigi Schmid, with whom he has always had close connections during his tenure at the helm of the national team.

“Our league is very different than it was 10 years ago,” said Schmid. “The whole dynamic of it was different; salary structures were different, the opportunities were different, and the advice (on whether to play in the U.S. or Europe) was different. But now the league is at a stage where a lot of those things have become erased, a lot of those things are very close to equal. I think the development of players in our country continues to grow.

“Everybody knows individually when he’s ready, and when that next step is right. I think Jordan will know that as well. Taking things step by step is not the worst thing in the world.”

Morris enters the professional ranks after three seasons at Stanford, where he won the NCAA Division I championship in December — Stanford’s first national soccer title — and also won the Hermann Trophy for the NCAA’s best player.

Morris said the national title was the final feat that freed him to turn pro.

“I appreciate that (the Sounders) were interested in signing me after my freshman year, after my sophomore year. But I wasn’t going to go after my freshman year. That was too short a time,” said Morris. “After my sophomore year I was considering it. But I had some unfinished business that I wanted to accomplish and I feel like had a commitment to my teammates there at Stanford to come back and help them try and win a national championship.

“It worked out this year, it was a great way to go out . . . and I felt more ready this year than I did my sophomore year.”

As for the recent trip to train with Werder Bremen, he said it had been interesting to test the waters, but he hadn’t had many doubts about where he wanted to end up.

“In talks with Jurgen and (U.S. U-23 coach Andi Herzog), they kind of helped to set that trial up over there. That was a great experience, but I always knew I wanted to come home,” he said. “It kind of reaffirmed that I wanted to play in my home town and play in front of the 45,000 fans at CenturyLink and be around my family.”

A former Sounders Academy member, Morris won’t have to go far to find family at practice. His father, Michael, served as team physician with the USL Sounders and currently holds the title of team medical director and orthopedic surgeon.

Expectations for Morris, already high, will grow with the season, and when the U-23s prepare for the Olympic Games in Rio. Morris said he wasn’t afraid of the pressure.

“I don’t know if it is pressure,” he said. “I look at it as an opportunity to continue to grow and learn in an environment that I’m comfortable in.”

“I think Jordan can eventually evolve himself into that same class, if (he) puts in all the work on his part . . . he has some qualities that you can’t teach,” said Schmid. “When you have that, and you have the commitment and the dedication to go with it, you can go a long way. But you can never predict how far that road will go, because that’s constantly a work in progress.”

So much for no pressure.

Everyone in the front office agreed that Morris is special enough to warrant the richest homegrown contract in MLS, which will eclipse Gyassi Zardes’ contract with the Los Angeles Galaxy, worth $233,000 last season.

Morris is special enough that Schmid hinted that he might lean away from his sacred 4-4-2 formation to make the most of the $8.25 million the club is paying its four premier forwards — Clint Dempsey, Obafemi Martins, Nelson Valdez and Morris.

“Having too many good players is never an issue,” he said. “Jordan is a forward. He still has his youthful exuberance that he can run around a flank for a little bit. But how we’re going to play next year, we’ll determine a little bit more in preseason.

“We’re obviously leaning a little bit more toward playing three strikers, maybe playing a little more of a narrow front than we have in the past, to make use of the talent that we have.

“We also have a number of games, we have the Champions League, we have the Open Cup. There’s certainly going to be games and opportunities (for Morris to play).”

GM Garth Lagerway said Morris’s decision was another step toward the club’s goal of global recognition.

“Our aspiration is to be one of the greatest soccer clubs in the world, and we believe we can do that,” said Lagerway. “Keeping one of our top homegrown talents with our club is a massive step toward accomplishing that.

“I think it’s important that our fans take credit for this . . . for creating this environment that all these players want to come play in.”

Is Morris the next great American soccer messiah? Far too early to tell. But he will be a talented addition to Seattle’s roster. His decision to stay home is a departure from the historical trend.

The next question is whether Morris gracefully transitions to pro play, or stumbles over the hype that will surround him.

Prior to his time with the Academy, Morris was a two-time All-KingCo selection at Mercer Island High School and was named league MVP in 2012 after leading the Islanders to an appearance in the state title game. He was also named 2012 Gatorade State Player of the Year, NSCAA Washington State Player of the Year and a NSCAA High School All-America selection . . . Morris joins six other players as Homegrown signings. U.S. National Team defender DeAndre Yedlin was the club’s first in 2012, making two MLS All-Star appearances before being sold to Tottenham Hotspur of the Premier League. The club then signed midfielder Aaron Kovar and former forward Sean Okoli in 2013, before adding forwards Victor Mansaray and Darwin Jones in 2014. Earlier this month, the Sounders signed University of Denver midfielder Jordan Schweitzer to a Homegrown deal.