Thiel: Seahawks and Chancellor: Now what?

The holdout of Kam Chancellor was the most unexpected blow to another trip to the Super Bowl for the Seahawks. They need to resolve it quickly, or prepare to deal him. 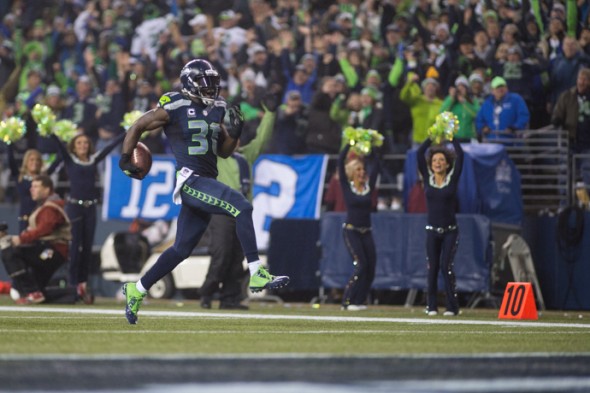 With a 90-yard pick-six, Kam Chancellor had a big time against the Carolina Panthers a year ago in the playoffs; not so much last week. / Drew McKenzie, Sportspress Northwest

Over the past five seasons, two players gave the Seahawks their distinctive reputation for ferocity and physicality, one on each side of the all — RB Marshawn Lynch and SS Kam Chancellor. Lynch put the Beast in the offense and Chancellor the boom in the Legion.

Both could be gone next season. Who’s going to scare opponents then? Tyler Lockett?

No disrespect to Lockett. Besides being fast and quick, he’s remarkably tough for a little guy. He was the best new guy on the team in 2015. He deserves much respect.

But is he feared? No. He is among numerous Seahawks who collectively are good enough to contend again. But are any of them dreaded by the opponent? No, not like Lynch or Chancellor.

They made foes think twice before engaging them. A small edge, but every edge is valuable is a hard game played only by the toughest.

The Lynch situation, you know about. He’ll be 30, he’s been injured for the first time, he seems at odds with management (which he will be wherever he goes), he’s expensive. And presuming a return to good health of Thomas Rawls, Lynch has someone who is on the outskirts of replacing him.

The Chancellor situation is different. A few weeks before training camp, he surprised every one of his teammates, coaches and fans by holding out after the first year of a four-year deal. And while coach Pete Carroll won’t admit it, Chancellor’s holdout was the one thing he didn’t see coming, and for which he had no workaround.

In terms of fines and missed paychecks, the foolishness was costly for Chancellor; it was at least as costly for the team. They lost, closely, the two games he sat out, and upon his return, he was part of a defense that under-performed by its own standards in a 2-4 start.

Chancellor also under-performed by his own standards. He had some highlight moments, including two forced fumbles that were pivotal; one against WR Calvin Johnson that averted an embarrassing home loss to Detroit; and another against RB Adrian Peterson that set up the game-winning field goal in the Minnesota playoff game. And he set the club record for most tackles in a game with 19 (seven solo) against Arizona.

But he was part of breakdowns in coverage that contributed to home losses to the Bengals and Panthers, and generally was not the menace he had been in previous seasons.

“I think it was hard for him to just . . . he had to endure the starting part of the camp in-season,” Carroll said in his post-season wrap-up. “You do that in preseason. You get two weeks, and then you get another four (exhibition) games.

“Usually you can ease into that, so it was more taxing on his body. He handled it well. He dealt with it very well. His attitude was good, but still it’s demanding. It’s a lot to ask of somebody.”

So was the holdout. The odd thing was how it ended. Chancellor just gave it up, apparently without anything to show for no-win position. He and Carroll had a Sept. 23 press conference, in which they agreed to shelve talks until after the season; nothing would be discussed about business.

The season is over. Now what?

Asked about Chancellor and DE Michael Bennett, in the same contractual situation as Chancellor (unhappy after the first of four seasons) and who threatened to hold out before reconsidering, Carroll shrugged and avoided.

“There’s all kinds of stuff we’re going to be working on,” he said. “I’m not going to single anything out right now, because there’s no way I can do that and be talking straight with you, because I don’t know. We have a lot of thoughts, and we’re just going to start putting them together over the next few weeks.”

Carroll was asked whether the holdout, which teammates undoubtedly hoped would succeed for the precedent it set, but cost them wins, had lingering impact.

“Only in terms of continuity and communications,” he said. “We made a big mistake in the (regular-season) Carolina game (that allowed the winning touchdown). That’s totally uncharacteristic. Maybe just the fact that we weren’t together as much. It wasn’t necessarily that it had to do with Kam at the time.

“There’s a fine tuning to the relationship, the communication, the awareness, that you have to be together (at training camp) to do it. Otherwise camp wouldn’t be that valuable. We think it means something. I don’t think it had an effect other than that. I think Kam was a marvelous factor in this clubhouse.”

The biggest differences from the Lynch situation is that Chancellor, at 28 in April, is still in his prime, has two guaranteed seasons left and has no backup ready to succeed him.

But if Chancellor can’t be appeased contractually by a modest advancing of future money to the present, do you think the Seahawks should put up with a situation that puts another overmatched talent such as Dion Bailey in the starting lineup to compensate for a pout?

As with most pro sports, the NFL is a ruthless business with thin margins between victory and defeat. The owners have a big advantage over players in the collective bargaining agreement that defines contracts. If Chancellor truly thinks he’s underpaid, he needs to take it up with the union and his agent, and have them explain to him why he signed the $28 million, four-year deal that at the time made him happy.

It was inevitable that the safeties market would outpace the deal. Why should his teammates take the hit for that? And now that he has under-performed a bit for a year, the contract is still in place. The Seahawks will not be asking for givebacks.

Free agency begins March 9. Before that, in the pile marked “all kinds of stuff” by Carroll, they need to pull out the Chancellor saga and resolve it early, or prepare to trade him.

Over the past five months, Chancellor lost leverage and goodwill, the Seahawks lost games and patience. The relationship can begin repairs with a fast settlement that precludes a difficult chase in the trade market, or free agency or the draft for someone who can approximate his original value in talent and menace.

If any team can do it, the Seahawks’ track record suggests they can. Remember, Chancellor was a fifth-round pick out of Virginia Tech.

They would love to avoid it, because they don’t want to go into the 2016 season attempting to replace Beast and Boom.