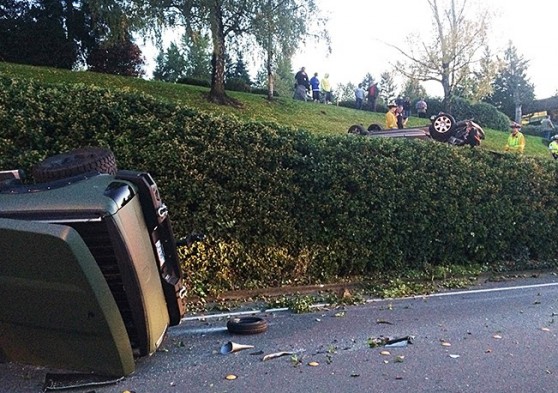 Derrick Coleman’s truck, left, ended up on its side, and another vehicle he struck flipped over. / Bellevue Police Dept.

The Seahawks off-season was off to a bad start Monday when fullback and special-teams ace Derrick Coleman was found to be driving impaired by a synthetic cannabinoid when he crashed his car into another vehicle in Bellevue Oct. 14, according to a Bellevue police department investigation.

Coleman admitted to smoking the drug commonly known as “spice” prior to the crash. Police recommended King County prosecutors charge Coleman with two felonies: Vehicular assault and hit and run with serious injury. The decision on filing the charges is weeks away, according to the prosecutor’s office.

The 102-page report said Coleman showed signs consistent with being impaired during field sobriety tests after the accident. A search of the car by officers found a glass spoon pipe with residue, an open bag of the synthetic cannabinoid labeled “F’d up” and three unopened bags of “mad pitbulls,” another type of synthetic cannabinoid.

A blood draw several hours later at police headquarters found no trace of the substances he said he smoked.

Coleman ran from the scene of the accident and was found two blocks away, barefoot. Coleman said he was uninjured, although his attorney later claimed he may have had a concussion that may have contributed to his behavior. The driver of the other car was injured, hospitalized and later released.

Coleman was suspended by the Seahawks and missed the game against Carolina Oct. 18, and also sat out the following week because, according to the Seahawks, of the concussion.

Coleman, 26, played in 31 games over the past three seasons, and this year started one game at tailback and two at fullback, with eight carries for 32 yards. He had seven special-teams tackles. Coleman drew national attention in the weeks prior to the Super Bowl in 2014 for his athletic success despite being deaf from age three.

He’s a restricted free agent, meaning the Seahawks can match any offer to keep him.

According to the police report, Coleman, traveling alone, was driving eastbound at 60 mph hour in a 35 mph zone along the 13500 block of SE 36th Street in Bellevue when he moved into the two-way left turn lane, then swerved back. He struck the rear of a Honda Civic also going eastbound. Coleman kept going full throttle for 260 feet until the Civic was run off the roadway up a small incline, where it flipped.

The driver, whose name was redacted, had a head injury and a broken collarbone.

Witnesses on the scene before police arrived described Coleman to police variously as “delirious and aggravated” and “incoherent.”

When officers found him two blocks away 20 minutes later, he was calm and cooperative. He admitted smoking spice around 5 p.m., and thought he was fine to drive. Coleman said he couldn’t remember the collision, thought he had passed out and, when helped out of his vehicle, couldn’t find the other car.

Coleman took field sobriety tests. He was arrested and jailed before posting bond.

According to the National Institute on Drug Abuse:

Synthetic cannabinoids refer to a growing number of man-made, mind-altering chemicals that are either sprayed on dried, shredded plant material so they can be smoked (herbal incense) or sold as liquids to be vaporized and inhaled in e-cigarettes and other devices (liquid incense).

These chemicals are called cannabinoids because they are related to chemicals found in the marijuana plant. Because of this similarity, synthetic cannabinoids are sometimes misleadingly called synthetic marijuana (or “fake weed”), and they are often marketed as safe, legal alternatives to that drug. In fact, they may affect the brain much more powerfully than marijuana; their actual effects can be unpredictable and, in some cases, severe or even life-threatening.

The state in 2010 labeled synthetic marijuana chemicals as Schedule I controlled substances, making them illegal to make, possess and sell.

Coleman’s attorney, Stephen Hayne of Bellevue, disputed the results of the investigation. He told the Seattle Times that Coleman passed the field sobriety test. The substance his client admitting taking is “not an illegal substance, and from all indications that we have heard, it didn’t have an influence on his ability to drive. I don’t know what that has to do with it. It is an over-the-counter substance.

“I have seen the test results and I can be absolutely confident that there was nothing in his blood that would have impaired his ability to drive . . . Our position is that he wasn’t driving recklessly and that he didn’t commit either of these offenses.’’

Hayne said he was surprised the department released its report before charges were filed.

“I’ve never seen a police department issue what amounts to a manifesto of why they are filing their case before charges have ever been filed,’’ Hayne said. “In my opinion, it is an attempt to save face by tarring Derrick with as many infractions as they could possibly divine from this incident.’’