At 19, Cristian Roldan started 11 games for the Sounders. But in his second year, the former Huskies star may have to slow his expectations as midfield veterans return to health. 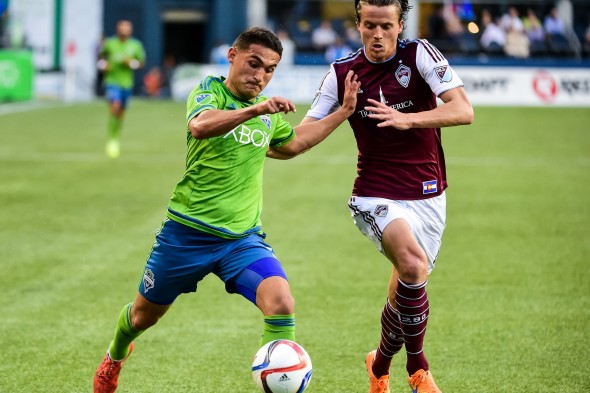 Cristian Roldan knows he has to fight his way to a starting spot in Seattle’s midfield, but that doesn’t bother him. / Corky Trewin, Seattle Sounders FC

Cristian Roldan can’t legally buy a drink, but the 20-year-old midfielder is entering his second season of MLS play after being an adult in his first pro year — 11 starts in a depleted Sounders midfield. Despite his youth and inexperience, Roldan said he aspires to start.

“I think my role is a little different this year,” Roldan said Monday after practice at the Starfire facility. “I spoke with the coaching staff and they mentioned playing more in the center-mid role. It doesn’t matter how the season is going, they want to get young guys on the field. Hopefully, I can get in that way.”

Field time will be nothing new for Roldan, the former University of Washington star from Pico Rivera, CA., who played 1,114 minutes last season in the midfield. He was moved around the midfield to make up for the absences of Marco Pappa and Gonzalo Pineda due to injury, national team call-ups, or suspension for DUI.

Coach Sigi Schmid said that Roldan’s listening ability stood him in good stead in the competition for minutes.

“He’s got a great attitude,” said Schmid. “He’s like a big sponge out there, he’s willing to absorb everything. But he’s also technically pretty clean.

“He’s faster than you think. He has that ability to win balls, and the passing ability to find connections.”

The tough thing for Roldan to consider is that his minutes are likely to drop if the main midfield unit of Osvaldo Alonso, Andreas Ivanschitz, Erik Friberg and captain Brad Evans remains healthy.

“I think he’d be the first one to tell you he played more minutes last year than he thought he would,” said Schmid. “He was maybe a little disappointed because his minutes waned a bit towards the end. But when you add it up and look at the whole year, it was a pretty successful year for him. So we expect him to continue to grow and advance.”

Roldan seems to have a realistic idea of how much of this season might be observed from the bench.

“(My goal this season is to) play as much as I can, and hopefully by the end of the year, maybe I can get a starting spot,” said Roldan. “I try not to set too many expectations, because I also don’t want to let myself down if I don’t meet them.”

Roldan will be afforded chances to prove himself coming off the bench, particularly if the Sounders elect to play a 4-3-3 to make better use of their powerhouse forward group. The 4-3-3 (and its primary variants,  4-2-1-3 and 4-1-2-3) require much higher effort from all  midfielders to cover the wide spaces in the wings, meaning that midfield depth and smart use of substitutes becomes crucial to staying competitive for 90 minutes.

Roldan said that a 4-3-3 would be an ideal fit for his skill set.

“(My ideal position) would be a number eight (an attack-focused, two-way midfield role) in a 4-3-3. Obviously we have quality guys up top. The midfield will have to distribute the ball and defend a lot of the time, because of our offensive players. But I think a number eight, because I have the engine to run up and down the field, and hopefully I can break up plays as well.”

Having trustworthy midfield depth is crucial in the February-to-December U.S. pro soccer season.

“(Depth is) definitely important,” said Roldan. “This is the longest season of sports, really, I think in the whole world, especially with older guys in the midfield. It’s key to have a couple guys that are able to step up.”

Ivanschitz, Evans and Alonso all missed time last year due to injury, and the toll of the 34-game MLS season likely will mean that Roldan will get an opportunity to start. In the meantime, he seeks guidance.

“Ozzie (Alonso) and (Erik) Friberg have been helping me out,” said Roldan. “Those guys are obviously the starters, and I’m trying to take their position. Eventually, they’re going to retire, as sad as it is, but they want me to step up and do well.”

Roldan has the speed, youth, and energy that the Sounders are looking for in their generational shift. Coaches look to get him more time and experience, but can still be pleased knowing that, at 20, he’s already manned up to hold a No. 2 slot in Seattle’s midfield.

The Copa America Centenario Local Organizing Committee announced Monday that tickets for the tournament would go on sale at non Feb. 3 Tickets will be available online at CA2016.com or by calling Ticketmaster at 1-800-745-3000

The tournament will feature three matches at CenturyLink Stadium, including a potential USMNT game in the tournament’s quarterfinal, if they finish at the top of their group.