Remember all those strikeouts, and times caught stealing? If the new “mental” coach, Andy McKay, gets some buy-in, the Mariners this season will look as if they know what they’re doing. 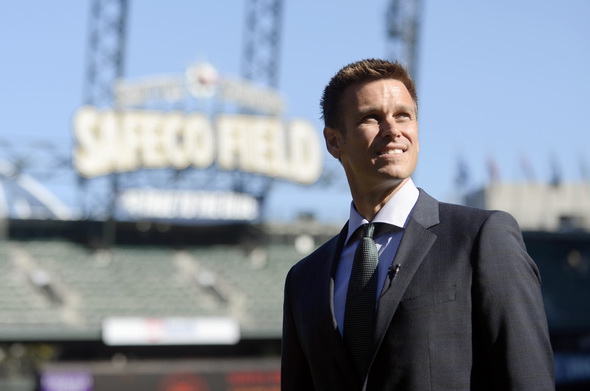 Jerry Dipoto’s tranformation of the Mariners is more than shuffling the deck chairs. / Alan Chitlik

As much turmoil as the Mariners’ 40-man roster has seen under new general manager Jerry Dipoto, so the scouting and personnel departments have been upended. As one newcomer, director of player development Andy McKay, put it, “There’s been a tremendous amount of turnover. I’ve spent the majority of my time creating a staff.”

The tumult was reminiscent of the weeks, and even much of the first two years, after Pete Carroll took over the Seahawks.  Not only that, listening to McKay and Dipoto talk at the annual media luncheon Thursday, it sounded as if the hires, the plan and the execution came from The Book of Pete.

Not a single advanced metric in that mound of nouns. Nary a deviation from Carroll’s approach that has produced four 10-win seasons in a row, two Super Bowl appearances and one championship.

Carroll can claim none of those emphases as unique to him. He does get credit for implementing many of the ideas taken from UCLA hoops coach John Wooden and force-feeding them into a crusty NFL. As will Dipoto when it works in even crustier MLB.

The ideas have been around sports a long time. It’s just taken a long time to bubble up to the top.

McKay might be the most intriguing Dipoto hire among the many new faces, including players. He’s the guy in charge of getting the most out of each player in the club’s employ. For longtime followers of the Mariners, this news should be accompanied by herald trumpets.

No team has quit on so many of its players over so long a time, only to see them blossom elsewhere.

In an era of increasing parity, despite the absence of a salary cap, MLB has been unable to drag the Mariners into the playoffs for 14 years. Not only is it the longest baseball drought, it is second only to the NFL Buffalo Bills (1999) in all of major American pro team sports.

That is a Berlin Wall-level of resistance to success. McKay’s job: Tear down this wall.

“What I’ve found is, a lot of people do it in different ways,” McKay said. “It’s just about getting more buy-in. It’s not about being the smartest in the room. It’s about getting the most people in the organization to believe what you believe.”

That may not seem profound to some. But having been around the Seahawks facility in Renton, it is remarkable how many players slap the wall above the doors every day they enter the indoor or outdoor practice fields. They are touching signs that say, “I’m in.”

It’s not an empty gesture. Players and coaches do it as a learned, positive habit, even when they think there’s no one around to impress.

McKay’s job is saddled with the awkward nickname, “mental coach,” which for some us connotes a coach “going mental,” a pejorative that has outlived its usefulness but not its recollection.

“He has a mental skills background, which is a great advantage,” Dipoto said of McKay, who was a Sacramento junior college baseball coach for 14 seasons before managing a team in an independent pro league for four years, then joining the Colorado Rockies for three seasons as peak-performance coordinator. “But it won’t define him as our farm director. He’s a good baseball man who’s had a long career understanding the need — the art — of unlocking a player’s mind.”

The time will come in sports when any distinction between mind and body will be greeted with the same bewildered look as “mental coach” is by some now.

“You can’t separate the two, the mental and the physical,’’ McKay said. “It’s a misunderstanding. To say someone’s a mental coach, you’re already contradicting the basic concept, which is that your physical breakdowns are always preceded by mental breakdowns.’’

McKay won’t operate from a distance. Instead he will be in uniform and in the faces of as many players as he can visit, from rookie league to Safeco Field.

“I would like to be as hands-on as you can possibly be,’’ he said. “I’d like to be out there for early work. I consider myself a coach.”

Carroll has offered up a derisive term that he has heard from skeptics about his methods: Airy-fairy. McKay probably has heard similar things. But Thursday he simplified the goal of his teachings to two words any boss, teacher, parent or spouse can understand.

“You can whittle mental skills down to the basic concept of paying attention,” he said. “So when (as a player) I’m doing a drill, my mind is completely consumed with that drill. You teach it through textbooks, you teach it through classroom settings.

“Most importantly, you teach it by your coaches bringing it to life, by constantly reminding those players and bringing your focus back to the present. If you can train that way, it should translate into performance.”

The concept of clarity of mind and immediate purpose is especially important in baseball, where there is so much more idle time between plays, and so much monotonous routine in the days, weeks and months of a season.

I can’t get out of my mind from the 2015 Mariners season when Robinson Cano, of all people, strolled in from third base to home after a walk, thinking he had been forced in when, in fact, the bases were no longer loaded. The tag may have been the worst out in Cano’s mostly illustrious career.

The Mariners seemed plagued by unforced mental errors last season. Expanding that to include areas of game judgment, the Mariners were fourth in MLB in strikeouts and second-worst in steal percentage. No wonder one-run deficits seemed like Everest.

A mere drift last season toward the major league average in those categories, and the Mariners would have won at least a half-dozen more games.

Speaking of wins, Dipoto wasn’t bashful about offering a 2016 target. Even if it’s a standard one for most teams, it’s rare for a Mariners boss to creep out to the edge, knowing the abyss is full of his predecessors.

“We’ll start the season with the idea that we’re going to get into the mid-80s (wins),” Dipoto said. “If you can get into that 85-, 86-win zone, and let the chips fall where they may, it’s amazing how frequently you’re going to wind up winning a lot more games than that.”

McKay offered up the road map for players.

“The sooner you can get on board with it and start believing what we believe,” he said, “the cumulative power will be there and it will translate into wins.”

Somewhere, Carroll is dabbing at his eyes and smiling.