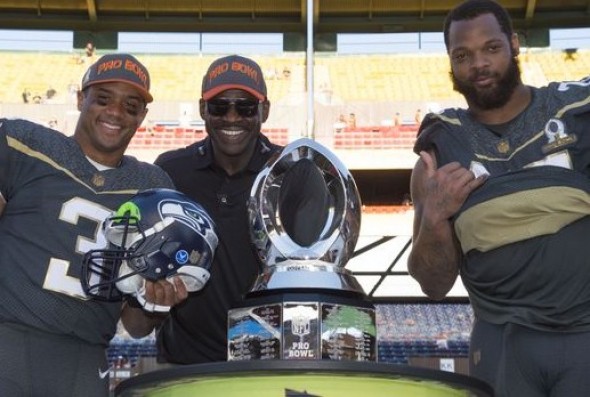 Russell Wilson won the offensive MVP of the game award and Michael Bennett won the defensive award. Michael Irvin was happy for both. / USA Today

For whatever it’s worth, Russell Wilson was king of the Pro Bowl in Honolulu Sunday. The Seahawks quarterback was named most valuable player after throwing three first-half touchdown passes to lead Team Irvin to a 49-27 victory over Team Rice.

The first player picked in the roster-drafting system by Hall of Fame coach Michael Irvin, Wilson led scoring drives on three of his team’s first four possessions at Aloha Stadium. The first two TD passes went to Falcons teammates Julio Jones and Devonta Freeman, and in the second quarter to the Rams’ Todd Gurley.

DE Michael Bennett was named defensive MVP after getting the game’s only sack and tipping a pass that became an interception. LB Bobby Wagner led the game with nine tackles, such as they were.

The two were the first Seahawks to win MVP honors in the Pro Bowl since Warren Moon was named MVP in 1998. It was the first time the offensive and defensive MVPs were from the same team since 1971.

Two Seahawks were in on the goofiest play on a day when tackling was typically accidental. CB Richard Sherman lined up on offense, ran a flanker reverse out of which he reversed field and lost 22 yards after Wagner, on Rice’s team, grabbed Sherman and flopped on him out of bounds, to much laughter.

To give an idea of how seriously the game was taken, Sherman had time on the bench to tweet out an explainer on his dubious cutback move:

FS Earl Thomas, who was voted to the team but stayed home, as did SS Kam Chancellor, felt compelled to tweet a tongue-in-cheek apology:

Yall excuse my teammates they don’t know how to act sometimes. Lol

Bennett may also have set a record when he picked up two offsides penalties for jumping the snap. The previous record in the all-star game’s history for offisides was believed to be zero.

These are the kinds of things that happen to teams that don’t make the Super Bowl.