Can we talk about XL now? Ten years ago Friday, the Seahawks lost their first Super Bowl appearance, thanks in part to ghastly officiating. But it’s time to take it out of the attic. 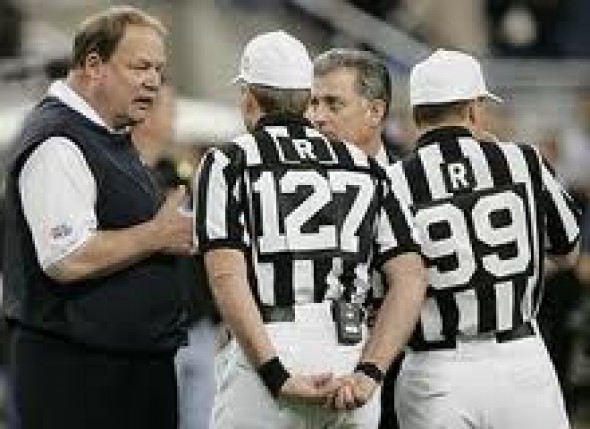 Much of this pre-Super Bowl week is devoted to saluting the game’s 50th anniversary. But nobody is saying much in Seattle about the Seahawks’ 10th anniversary of their first Super Bowl appearance. It just sits in the attic, like the gag trophy for the winner of the three-legged race at the family’s summer reunion picnic.

For all those Amazon newbies who are arriving in Seattle at a 1,000-a-day rate, here’s a brief history of the Game That Shall Never be Spoken Of XL (as opposed to the Game That Cannot Be Unseen XLIX):

What? Are you kidding me, ref?! Fercripesakes! WTF? I don’t freakin’ care that Jerome Bettis is from Detroit! How can you penalize a quarterback for a low block when he is chasing the guy who intercepted his pass?! . . .

It was the worst-officiated game in Super Bowl history, a fact you will not see acknowledged this week in San Francisco/San Jose/Santa Clara/Wherever ahead of the Carolina-Denver disagreement.

The NFL employs a battalion of death-eaters to swoop over the history books to devour the impure. But the death-eaters missed one guy: Bill Leavy, the game’s lead official.

So overcome by guilt and shame was Leavy, that at a Seahawks preseason game in 2010 to discuss rules changes, unprompted, he astonishingly owned up — in Seattle — to his misdeeds that afternoon at Detroit’s Ford Field.

“It was a tough thing for me,” Leavy told reporters at the Seahawks practice facility. “I kicked two calls in the fourth quarter, and I impacted the game, and as an official you never want to do that. It left me with a lot of sleepless nights, and I think about it constantly. I’ll go to my grave wishing that I’d been better. I know that I did my best at that time, but it wasn’t good enough.

“When we make mistakes, you got to step up and own them.”

Interesting he didn’t own it until Mike Holmgren left as coach. The NFL never booked Levy for another Seahawks game while The Big Show stomped the sidelines. Might have looked like the bear scene in “The Revenant.”

All the players and coaches from that team have moved on. Most of the fans who were here haven’t. But neither do they dwell, at least not since Pete Carroll has distracted them with four 10-win seasons in a row, two Super Bowl appearances and one championship, part of a 60-36 regular-season record and 8-4 in the playoffs.

A decade later, it is time to rehabilitate that Super Bowl run, at least to a place in the living room where it can be discussed.

It was a hell of a regular season, 13-3. With Walter Jones, Steve Hutchinson, Matt Hasselbeck and Shaun Alexander, the Seahawks pounded the Redskins and Panthers in the playoffs. They had a fair shot against a good but not great Steelers team led by a sophomore galoot named Ben Roethlisberger. He completed nine passes. And won.

Officiating atrocities aside, the Seahawks made the Super Bowl in their 30th year. That doesn’t sound like much, but when a survey after 40 years of the NFL landscape is taken that includes the Carroll era, the Seahawks as a franchise have finally filled out the uniform.

The Seahawks’ three Super Bowl appearances tie them with the Cleveland/Los Angeles/St.Louis/Los Angeles Rams for 14th. Four teams have made eight appearances: Pittsburgh, Dallas, New England and now Denver. So the Seahawks are middling, but the NFL until the free agency era began was lopsided.

The Seahawks’ lone Super Bowl win means they are one up on 13 NFL teams. Or, as John Clayton likes to say, let’s put it this way: In half a century of Super Bowls, nearly half the teams have failed to win one.

If Super Bowl history is considered over the past 20 years, the Seahawks are wearing big boy pants. The demarcation is important, because after the 1993 collective bargaining agreement that permitted real free agency for the first time, the business of team-building changed so radically that measures of comparable success before 1995 are almost irrelevant.

It’s like the dead-ball, live-ball split in baseball’s history. The game was so changed the old standards were marginalized.

Since 1995, the first year of major player movement, New England has made seven Super Bowl appearances. Pittsburgh and Denver have made four. The Seahawks are tied with the New York Giants and Green Bay Packers at three. The Colts, Panthers, Ravens, Rams and 49ers have two.

It’s probably little solace this week to Seahawks fans, who at this time a year ago were hanging on to every word Marshawn Lynch wasn’t saying, but the franchise has moved to the fast lane.

Except for one bad referee and one bad play, they would be 3-0 in Super Bowls, the NFL’s leading mark.

So on the 10th anniversary Friday of the 2006 Super Bowl in Detroit,  it’s time to take the game out of the attic and talk about it as if no longer has cooties.