A career night from freshman Dejounte Murray and a late contribution from Andrew Andrews were the difference-makers in a poorly officiated game Wednesday. 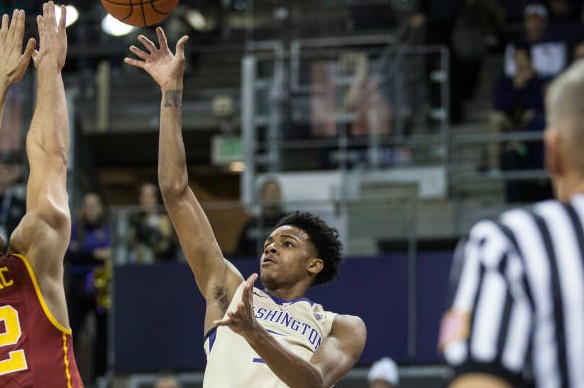 Trailing by 12 at halftime, the University of Washington men’s basketball team got things cooking in the second half, before running roughshod over Arizona State in overtime in an exhausting 95-83 triumph that lasted nearly three hours at Hec Edmundson Pavilion Wednesday night (box). The Huskies’ Dejounte Murray dominated play with a career-high 34 points, 11 rebounds and six assists.

“That’s (Murray’s) best game so far, offensively,” coach Lorenzo Romar said. “While we could not make baskets, he kept us in the game.”

Murray routinely danced his way through three or four defenders in the paint, banking in shots over outstretched defenders and dishing out passes. Murray scored or assisted on 11 of Washington’s first 16 points.

Arizona State (12-11, 2-8 Pac-12), however, dropped in three-pointers galore in the first period, going 8-of-14 from beyond the arc, with sophomore guard Tra Holder tallying four of five.

“I think it was our defense, and then I think we started seeing the ball a little more,” said Andrews. “The gym was electric; I think (fans) really keyed on us coming back, it got (ASU) kind of rattled.

“We were able to get out and get easy baskets. (Murray) was going both first half and second half.”

Arizona State refused to go away, however. With 13 seconds left, sophomore guard Kodi Justice took a pass from the baseline, rolled free, and dropped in a long three to tie the game at 78 and force overtime.

The extra period was all Washington. Murray added four more points before fouling out, and Andrews, who struggled to that point, did the rest. The senior dropped his first three of the night after six previous misses, then sank a pair of free throws to put the game out of reach.

Foul trouble hampered the Sun Devils throughout. For once, the Huskies, the most foul-prone team in Division-I, were on the other side, as they went 31-of-45 from the charity stripe, with Murray (14-of-18) and Andrews (8-of-11) the main beneficiaries.

The game was overzealously officiated. Both the home crowd of 6,533 and Sun Devils coach Bobby Hurley had plenty to say to the officials as they twice went to TV monitors for longer than four minutes. They assessed flagrant fouls to Malik Dime in one instance, and simultaneous flagrant fouls for Andrews and ASU’s Willie Atwood, causing the latter to foul out.

Asked if the stoppages made sense to him once they were explained, Romar pursed his lips and stared at the table.

“We out-rebounded them by eight,” replied Romar after a pregnant pause. “That was good.”

The Sun Devils had three players foul out and four finish with four fouls. Atwood was the greatest loss, leaving with 14 points and two assists. Washington made a clean break by comparison, with two DQs and two with four fouls.

Romar stressed that having no players with more than two fouls at halftime freed up his team considerably after the break, and helped avoid the second-half defensive letups that have characterized the short-manned Huskies in recent games.

The biggest benefit was keeping on the court for the whole game freshman forward Marquese Chriss, who has fouled out 11 times. Chriss finished 7-of-7 from the field with 19 points. Memorably, Chriss slammed in an Andrews three-point attempt as it was still on its way up from the rim in overtime to help Washington outscore Arizona State 17-5 in the extra period.

Andrews finished with 13 after a taxing 42 minutes that were much longer in real time. Matisse Thybulle hit double digits for the fourth time, scoring 10 before fouling out.

The Sun Devils were led by Holder, who finished with 18 points and six assists. Atwood and Justice each bagged 14, while Obinna Oleka and Gerry Blakes scored 12.