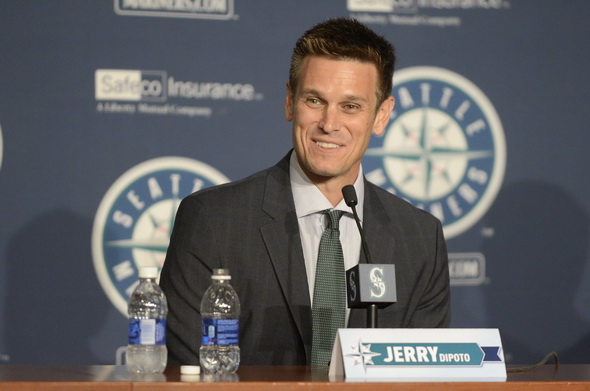 Better than radio call-ins, better than giant banquet rooms, the Sports Salon gives fans a chance to ask questions in a convivial happy-hour setting.  Next newsmaker to join me at the World Trade Center Seattle’s spectacular restaurant: Mariners general manager Jerry Dipoto. At 5:30 p.m. Thursday, get the lowdown on the Mariners’ build-up from the architect himself.

Good food, happy-hour drink prices and some networking time will precede my Q-and-A session with Dipoto, followed by questions from fans in a relaxed, casual setting.

Since his September hire, Dipoto has moved 43 players on or off the roster, including five  who were acquired and dispatched before playing an inning for the Mariners.

The Mariners have two new starting pitchers, a remade bullpen and five new starting position players. Just this week Dipoto signed to a minor league contract a 300-pound first baseman from Korea,  Dae-Ho Lee, to compete for a bench spot.

An MLB relief pitcher for eight seasons, Dipoto was for the previous four years the general manager of the Anaheim Angels, who had 98 wins in 2014. He has spent 15 years in the player-personnel departments of five MLB organizations, and was nearly hired as the Mariners’ GM in 2009.

World Trade Center Seattle is on the downtown waterfront opposite Anthony’s Pier 66. Parking is available in the building garage.

Tickets include appetizers and are $20 for WTC members, $30 for non-members. Drinks are at happy-hour prices. Bring your questions, concerns and opinions for Dipoto, who already said he thinks the club can make a 10-game improvement.

Program brought to you by CodeSmart, Sportpress Northwest and the World Trade Center Seattle