The Broncos’ 24-10 upset win over Carolina was a trudge, but news tweeted in the fourth quarter was sad for Seahawks fans: Marshawn Lynch is retiring. But it’s good news for the Beast. 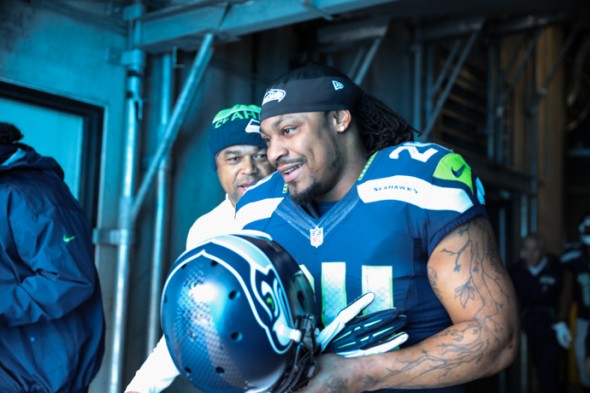 Marshawn Lynch took the field for the last time in his career three weeks ago in Charlotte. / Drew McKenzie, Sportspress Northwest

Just when the Seahawks season was three weeks done, now I want them to play the Broncos next week. After watching the Denver defense discombobulate QB Cam Newton and the Carolina Panthers 24-10 in a mostly dreadful Super Bowl Sunday, I’m curious. Could the Seahawks defense have smothered up Denver QB Peyton Manning even more?

Could we have had the first 3-2 outcome in the game’s 50th anniversary?

The prospect of watching game MVP DE Von Miller blow past either Russell Okung or Garry Gilliam for multiple sacks of QB Russell Wilson would not have been pretty for Seahawks fans. But surely Wilson would have fared better than Newton, whose decision-making and passing accuracy regressed to the pre-2015 Newton, who this season was the near-unanimous choice as league MVP.

However, the what-if reverie dissipated quickly when Marshawn Lynch waited until the fourth quarter, with the game still in doubt, to tweet the globe his news:

A nearly universal symbol of sports retirement poignantly delivered the mostly expected, but nevertheless sad, news for nearly all the 12s: Lynch was no longer about that action, boss.

At least, football action. On Friday, he began a new full-time gig as entrepreneur, opening his own storefront shop selling sportswear with the Beast Mode logo in downtown Oakland.

Sunday, with the social media world aflame with accounts of the unofficial national holiday, Lynch dropped on Twitter word that the symbol of the Seattle franchise the past five seasons was retiring at 29.

We’ll probably have to wait until his next appearance on Conan O’Brien’s late-night show to learn anything from him directly about his reasons. We all understand the obvious: He had the first surgery of his career Nov. 25, repairing a hernia, and inevitably experienced vulnerability, perhaps for the first time in his college and pro career.

For a player who plays with such reckless ferocity, the feeling must have been disturbing.

Then there is this claim, according to NFL.com’s Ian Rapoport and offered to Sports Radio 950 KJR Friday: Lynch saved all of his NFL salary, $49.7 million over nine seasons.

Apparently, he lives on his endorsement money, from Skittles, Pepsi, Activision, Progressive and others — plus locally, Beacon Plumbing. As you must know, he unclogged a lot of those drains.

Salute to my guy @MoneyLynch … It was an honor sharing the field with you.

If true, Lynch’s financial wisdom might have made a mark more impressive than making the earth move on his immortal Beast Quake run in 2010. He was smarter than probably 95 percent of his contemporaries. Lucky too: Until the end, he had an injury-free career, and landed with a franchise that managed, if not quite embraced, his iconoclasm and eccentricities.

Lynch fully understood that his unique form of badassery could win championships. He could not have found a more receptive coach than Pete Carroll and former Raiders coach Tom Cable. As long as he delivered the goods, Lynch knew he could operate in a separate orbit.

He also understood that the Seahawks may have come up with his near equivalent in rookie Thomas Rawls. Lynch cares enough about his teammates that the prospect of a reasonable transition was cool. The idea of moving to another club might have been considered, but the chances of replicating the advantages in Seattle were small.

And then there’s what happened to Kenny Stabler.

Oakland’s legendary “Snake,” who won election to the Pro Football Hall of Fame Saturday, retired two years before Lynch was born. I have no idea whether their paths crossed. Stabler died in July of colon cancer. His life before its end was miserable for another reason — Stabler’s brain had CTE, a degenerative disorder created by repeated blows to the  head.

The past week, the New York Times published a story about Stabler’s long cognitive decline right in the face of Lynch, the NFL and the Super Bowl. No one around the sport could have missed yet another ooga horn going off on the eve of the annual national party.

And few among that same constituency could have missed Commissioner Roger Goodell’s blithe, callous dismissal of concern about concussions. During his annual state of the league presser at the Super Bowl, Goodell said Friday if he had a son, he want him to play football.

“I’d love to have him play the game of football because of the values you get,” Goodell said. “There’s risk in life. There’s risk sitting on the couch.”

A master of the tone-deaf statement, Goodell retired the trophy with that one. To analogize between a sedentary life and the violence of pro football is the acme of reckless disregard for the risk to players, and at the heart of why players are increasingly distrustful of the claims and gestures the league makes about the primacy of player safety.

How aware Lynch was of Goodell’s breathtaking insensitivity Friday isn’t known, but the remark was egregious only in degree, not kind. Goodell has inadvertently exposed his bleakness before. Lynch knows.

He has a ring, respect, admiration and 50 large ones in the bank, and as much good health as any ninth-year running back in the NFL could hope to have.

He need suffer no longer fools such as Goodell and his machine.

Honor playing with one of the best running backs of all time! Going to miss sharing the backfield with you 24… #BeastMode @MoneyLynch