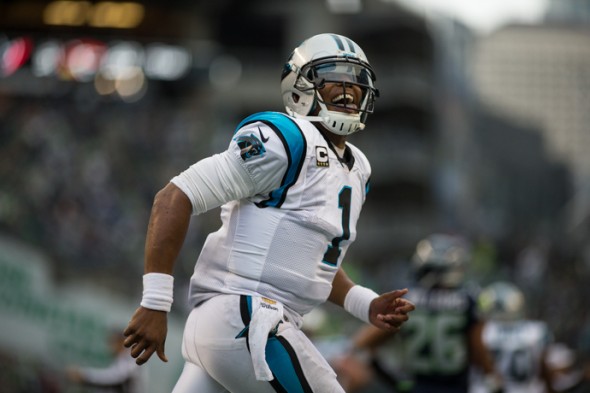 Cam Newton’s sense of decorum is a trifling matter, but his sense of self-preservation is a little over-amped. / Drew McKenzie, Sportspress Northwest

After reading the hubbub created by Cam Newton’s pouty post-Super Bowl press conference, I recalled a years-ago conversation regarding Mariners manager Lou Piniella. A friend said the Mariners manager must be a boring guy to cover because he was so trite and cliche-dependent.

I was startled, because I found Piniella to be one of the most engaging, insightful and, yes, volatile characters I’d encountered. A journalist’s dream.

But as we talked, I realized my friend’s impression of Piniella came almost entirely from the 60 to 90 seconds shared by the cable-TV outlet from his post-game Q-and-A sessions. With few exceptions, Piniella ran through his litany of triteness to satisfy TV and radio, then often gave good answers to good questions from the remaining reporters. And at other times less pressured, Piniella was a delightful storyteller.

Since few fans saw that side of Piniella, I understood my friend’s mis-perception, and have never forgotten its lesson about the futility of determining someone’s nature and character through the filter of TV’s voracious need for brevity and acceptance of inanity.

So the way Newton handled himself with the mandatory obligation of attending the post-game presser offers only minimal insight into the quality of his future as the Panthers’ leader. Mostly, it says he has some learning to do.

Any competitor who sulks in public like that is attempting to demonstrate his great contempt for losing, thereby fulfilling his self-belief that no one was suffering as much as he was. It is an utterly misplaced attempt to impress others. Anyone who has been a child might recognize the passive-aggressive tactic.

That’s just immaturity. My guess is that he’ll grow up and out of it. Not because he needs to impress the media or the public, but because immaturity puts pressure on his coaches and teammates to either explain him or compensate for him.

Testimony to that point came post-game when Broncos safety T.J. Ward, who said Newton’s penchant for petulance was part of the game plan.

“Hey, when things don’t go his way, we see the body language — it’s obvious,” Ward said. “That’s what we wanted to do. That was our intent to come in this game and get the body language going. We didn’t want the happy, fun-spirited ‘dabbing’ Cam.

“No, we want the sulking, upset, talking to my linemen, my running backs, ‘I don’t know what’s going on’ Cam Newton — and that’s what we got.”

From a Seattle perspective, Newton’s emotions are intriguing, because not only do he and the Panthers loom as disruptive to the Seahawks’ plan for NFC hegemony, the two most popular Seahawks have chosen to engage the public differently than Newton — and in polar-opposite ways. Each way works for them.

QB Russell Wilson opens a significant part of of his life to public scrutiny via social media — religion, love life, charitable deeds, Halloween costumes, vacations — and uses his mainstream media platform to deliver hundred-word answers filled with platitudes, bromides and homilies that offer almost no insight beyond what seems to have been scripted. But his national jersey sales, to use one simple marker of popularity, are always top five in the NFL and often No. 1.

On the other hand, retiring RB Marshawn Lynch avoids the weekly inquisitions so stridently that it has cost him fine money. But his inscrutable nature yields a mystery that advertisers, national networks and TV talk shows find compelling. He cooperates with them when conversation suits his desire to grow his brand. He’s at the top of every national TV talk-show producer’s must-have list.

But as was said, it’s fixable. He’s 26 and just finished his first go-round at the highest level.

More disturbing was what Newton did during the game, when his fourth-quarter fumble was rolling free upon the ground, yet he pulled back from his impulse to jump into the mayhem. The recovery by Denver set up the Broncos’ only offensive touchdown of the game, a four-yard drive that snuffed any chance of comeback by Carolina.

On the Panthers getaway day in Charlotte Monday, Newton offered a lame explanation about his leg being potentially “contorted” in the scrum, but remained defiant about what’s known in the trade as a “business decision” — avoiding contact that could jeopardize his future earnings.

“I don’t dive on one fumble because the way my leg was — it could have been (contorted) in a way,” Newton said. “OK, you say my effort. I didn’t dive down. I fumbled. That’s fine. But we didn’t lose that game because of that fumble. I can tell you that.”

Well, the play, and the game, was still undecided at that point. What surely was lost was Newton’s credibility as an athlete.

What a professional athlete says, or doesn’t say, usually amounts to a fleeting dust-up or a minor annoyance. As Wilson and Lynch have proven. What the same athlete does with the game on the line fairly screams.

After losing a Super Bowl to New England on a magnum error, the Seahawks had a lot of ‘splainin’ to do. Now, it is Newton’s turn — except it’s all about that action.