GM Dipoto optimistic, oddsmakers not so much

The Mariners head to spring training this week amid projections that they will win between 77 to 85 games and finish between second and fourth place in the AL West. 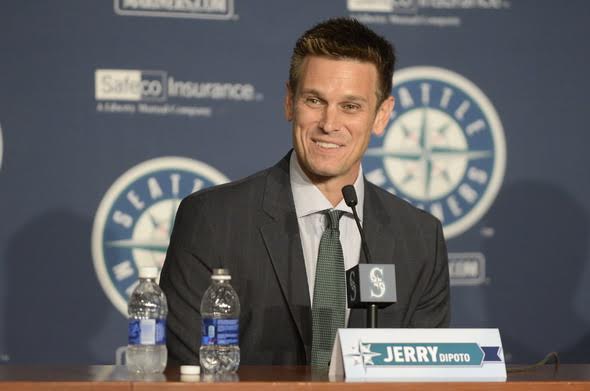 Since his hiring Sept. 28, Mariners general manager Jerry Dipoto has made abundantly clear that his predecessor, Jack Zduriencik, didn’t know what he was doing. Since Zduriencik departed, leaving not a wet eye in the house, Dipoto has executed a John Schneider/Pete Carroll-caliber remake of Seattle’s roster with 11 trades and five significant free-agent signings. In addition, Dipoto has inked a dozen others with major league experience to minor league deals.

None of Dipoto’s individual transactions stamped him the king of the Hot Stove League. But collectively, he believes, they have made the Mariners much more competitive than last year when, as a World Series aspirant, they executed a stunning face-plant.

“This has been a productive offseason,” Dipoto said in mid-December. In late January, during a pre-spring training media luncheon at Safeco Field, Dipoto added, “I think we did what we said we were going to do. I feel confident our game plan was executed. Now we’re going to find out as the season starts how good the game plan was.”

“I like the versatility and athleticism,” added Scott Servais, whom Dipoto selected as Lloyd McClendon’s replacement. “And to win, you’ve got to pitch. To have good pitching, you’ve got to defend. We got a lot better there, especially in our outfield defense. I think we’ll play a high number of one-run games.

“I just believe that in this ballpark (Safeco Field), you’re going to play tight games. So the ability to get on base and create consistent opportunities to score is important. The more athletic you are, the better chance you have to make that happen.”

Pitchers and catchers report to Peoria, AZ., Friday with position players following early next week. By the time the Mariners break camp at the end of March, it’s expected that they will have on their 25-man roster one, and perhaps two, new starting pitchers, a new closer, a new starting catcher, two new first basemen and two new starting outfielders.

The following are the major additions Dipoto made to the roster after he purged SS-OF Brad Miller, OF Mark Trumbo, LHP Roenis Elias, RHP Carson Smith, RHP Tom Wilhelmsen, and INF Logan Morrison, among a host of others:

Expected to have the greatest impact, starting with the pitching staff and concluding with the outfield, are Miley, Cishek, Ianetta, Lind, Aoki and Martin.

The 29-year-old Miley, who cost the Mariners Carson Smith and Roenis Elias, went 11-11 with a 4.46 ERA in 32 starts for the Red Sox last season. He threw 193.2 innings, the fourth consecutive year he’s pitched in 32 games or more and tossed at least 193 innings.

Playing in the American League for the first time in 2015, Miley led the Red Sox in wins, starts, innings and quality starts (17). Miley is one of four lefties (and 13 pitchers overall) to have made at least 32 starts in each of the past three seasons. His 98 starts since the beginning of 2013 are the most by a left-handed pitcher. Miley was an All-Star with Arizona in 2012.

“Wade is a proven major league starter who brings a level of stability to the middle of our rotation,” Dipoto said.

Cishek started 2015 with the Marlins but struggled with velocity and mechanics. He ultimately lost his closer’s job to A.J. Ramos, and then was traded to the St. Louis Cardinals July 24 for Kyle Barraclough.

“Steve had a couple of 30-save seasons (with the Marlins) and, obviously, he got off to a slow start last year. But he also had a fast finish,” said Dipoto. “I think this is a very positive addition to the back of our bullpen and goes a long way to solidifying it.”

Ianetta takes over for Mike Zunino, relegated to AAA Tacoma. Ianetta hit .188 with the Angels last season, adding 10 homers, but Dipoto acquired him because he is a major league vet where Zunino (hit .174) was not.

“This move improves our depth at a critical position,” said Dipoto. “Chris provides us with a solid veteran presence behind the plate, as well as an experienced major league hitter with strong on-base skills who will lengthen our lineup.”

Lind hit .277 with 20 home runs and 87 RBIs last year, his first in Milwaukee. He spent the previous nine seasons with the Toronto Blue Jays.

“Adam lengthens our lineup as a first baseman who gives us on-base percentage and power,” Dipoto said. “First base was a spot we came here looking to fill, and we feel that Adam is a good fit.”

A 33-year-old veteran of four MLB seasons, plus eight years in the Japanese Central League, Aoki hit .287 in 93 games for the San Francisco Giants last season and finished 11th among National League outfielders with a .353 on-base percentage.

“Adding Nori addresses our desire to be more athletic in the outfield, as well as more contact-oriented in the batter’s box,” said Dipoto. “His consistency, versatility and energetic style of play will fit us very well.”

The 27-year-old Martin cost the Mariners closer Wilhelmsen and OF James Jones. Although injured last year with Texas, over the last three seasons he ranks fourth among MLB center fielders in defensive runs saved (44) behind the Mets’ Juan Lagares (56), Lorenzo Cain (49) of the Royals and Carlos Gomez (46) of the Astros.

“The addition of Martin gives us a premier defensive center fielder,” said Dipoto. “His athleticism and speed will be strong additions to our lineup.”

A wild card to make the team is Lee, a 33-year-old Korean slugger who starred in Japan. He has a chance to platoon at first base with Lind if his game translates. In his Peoria workouts, Lee has dropped nearly 50 pounds to 245.

Dipoto told reporters last month that he has high expectations for his first year with the franchise.

“We built the roster with the idea to get into the mid-80s (in wins), get into that 85, 86-win zone, and then let the chips fall where they may,” Dipoto said. “It’s amazing how frequently you’re going to wind up winning a lot more games than that.”

A win total of 85-86 would slightly exceed the 83-win total projected by Baseball Prospectus. Atlantis Race and Sports Book in Reno also projects 83 wins. Fangraphs projects 84 wins. USA Today is the most dismissive of the Mariners, predicting 77 wins and a fourth-place finish in the AL West.

If USA Today is correct, Dipoto’s 11 trades and five free-agent signings will ultimately add up to one more win than last year’s total of 76, a major downer after all the World Series talk. If Dipoto’s projection of 85-86 wins is more accurate, the Mariners will be on the edge of a playoff spot.