Huskies need some stops to end the fade 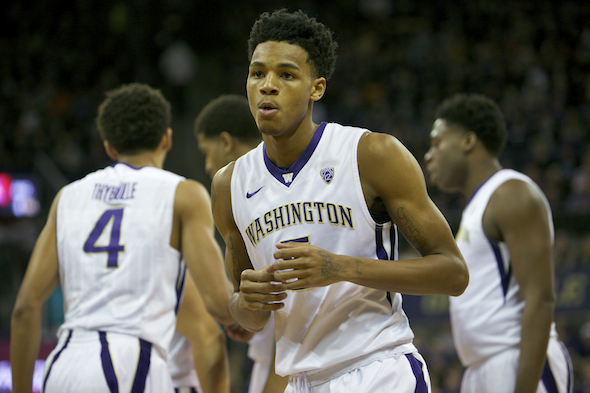 Dejounte “Baby Boy” Murray is a young star on a young team, but the Huskies may be too green for their own good. / Drew Sellers, Sportspress Northwest

On a three-game skid, the University of Washington men’s basketball team is under pressure. After getting swept on the road against Utah and Colorado, the 15-10 Huskies (7-6 Pac-12) need to make up major ground against California Thursday (8 p.m., FOX Sports 1) and Stanford Saturday (5 p.m., Pac-12 Networks).

With the Huskies on the bubble of the NCAA tournament projections, hopes hang heavily on a sweep. Despite a poor second half against Utah, and a poor first half against Colorado, coach Lorenzo Romar said that now is not the time to change his team’s “switch all the time” defensive strategy.

“We’ve done it the right way this year, a lot of times,” said Romar. “That’s why we’re able to have success. But when it breaks down, it really breaks down; there probably would be more breakdowns if we did it another way. Once we’ve gone this far, then we come in and say, ‘OK, we’re going to change and do it this way,’ we forget what we were doing before.

The problem is consistency. The Huskies specifically have struggled with big men recently. A forward has been the opposition’s top scorer in the past three games.

More worrisome for Romar, those forwards also cleaned up offensive rebounds that have cost Washington crucial possessions. Arizona’s Ryan Anderson and Colorado’s Wesley Gordon both had eight offensive boards against the Huskies.

Still, Romar defended his team’s play over the course of the season, even as he admitted that stretches of recent games had been “very bad.

“If you look at our games, take (the first game against Arizona) away, find me a game that we have not had a chance to win,” he said. “This team is in every game, so it’s a matter of a few things getting a little better and turning the corner. It’s a matter of three, four, five possessions a game, where if we’re better — I’m not exaggerating — we literally would be in first place.

That little bit of improvement is where Washington’s fate, and possibly Romar’s, will be decided over the last five games of the regular season. The freshmen-laden Huskies proved that they could play above their age earlier in the conference stage, but have been showing signs of fatigue lately.

Is it too much for a young team to manage? Was it always going to be too much? First-year collegiate athletes and the word “dependable” are seldom together in the same sentence, even with the sort of exceptional talent Romar brought to Montlake.

The freshmen had high expectations when they walked in to the gym for the first day of practice. An entire city was looking to see them end a four-year tournament drought, and possibly even restore some basketball relevance to a city that’s been in a state of post-partum depression since the Sonics left in 2008.

When a team relies so heavily on youth, however, slip-ups are inevitable. Even talented ones make errors, miss assignments, miss shots. The heat of the moment gets to them.

Powerhouse teams can temper instability with veterans. Juniors and seniors have been there. Washington does not have that luxury, except for fifth-year senior  Andrew Andrews.

The Huskies’ hopes come down to a race to maturity, developing resistance to the weight of expectations drawn from a fast start in conference play. To make the tournament, Washington has to be something it’s not shown yet — consistent.