Despite the departure of Obafemi Martins, Seattle will press on in its new 4-3-3 formation, with rookie star Jordan Morris stepping in up top. 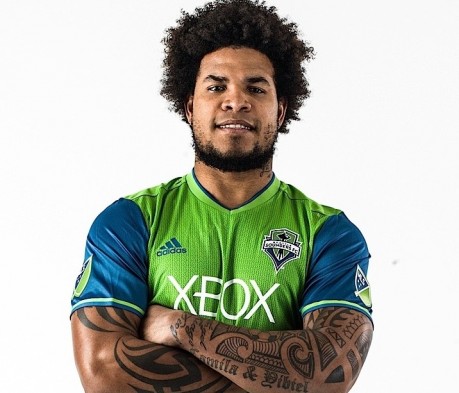 The Seattle Sounders concluded their preseason training trip with a 4-0 dismantling of the LA Galaxy Wednesday in Carson, CA., making efficient use of a new 4-3-3 formation that was hinted at when the Sounders landed homegrown standout Jordan Morris. The formation looks different than many assumed, as the departure of Nigerian striker Obafemi Martins for Shanghai Shenhua leaves a hole in the forward attack.

Sounders coach Sigi Schmid dodged questions about Martins in a phone call with media members Thursday, saying only that “nothing is finalized yet.” Yet Martins tweeted a goodbye message to Sounders fans Wednesday night, announcing his move to China.

Perhaps Schmid is clinging to hope, but it is more likely he is agitated. It is unclear whether Martins or the club was the driving force in his move, but the loss of Seattle’s leading scorer the past two seasons would be irksome for any coach.

The Sounders will have a new leading scorer this year. He said that despite Martins’ absence, Seattle is committed to the 4-3-3.

“We went into this season thinking this is a good way for our team to play based on personnel,” said Schmid. “We trained on it, we tweaked it; we’ve changed it a little bit. We’ve gotten better. Jordan was coming in, and we’re going to stay in that system because that’s what we’ve been training on. The team is really starting to find some (comfort).”

Wednesday night, Morris played on the right, with Nelson Valdez in the center and Clint Dempsey on the left. Andreas Ivanschitz played a roaming, attacking midfield role, with Erik Friberg and Osvaldo Alonso playing a more defensive role.

The formula worked. Ivanschitz scored twice Morris notched two assists. For most clubs, losing a player of Martins’ caliber would dash expectations, especially with the MLS season opener March 6. That Seattle can still be considered a Western Conference power is a testament to the depth of talent.

Still, the club won’t be the same without Martins, often credited by teammates as a player who would draw disproportionate attention from defenses, creating openings for other attacking players.

The Martins departure is too fresh to draw conclusions about its implications, especially since it is not known who Seattle might target to fill the vacated designated player slot.

Seattle’s remaining talent will have to produce consistent results without their game-changing sparkplug up top. If they cannot bear the loss of Martins’ production, Seattle will be looking at another dismal summer stretch when legs tire and players leave for international duty.

Pressure will be levied on the 21-year-old Morris to fill the gap. The talented youngster has big stage experience, having already played with the USMNT, but he has never been through a season as long or taxing as the MLS. The Mercer Island native’s consistency will be as important as his talent.

Seattle opens its season with the first leg of the CONCACAF Champions League knockout-round against reigning champs Club América Tuesday (7 p.m., FOX Sports 1). Eyes from across the league will be watching, waiting to see if the game is a coming-out party for the retooled Sounders, or reveals their inadequacies.