Dipoto explains his falling out with Scioscia

In a radio interview, Mariners GM Jerry Dipoto said he was “caught between two dynamics” in Anaheim with manager Mike Scioscia, causing Dipoto to resign. 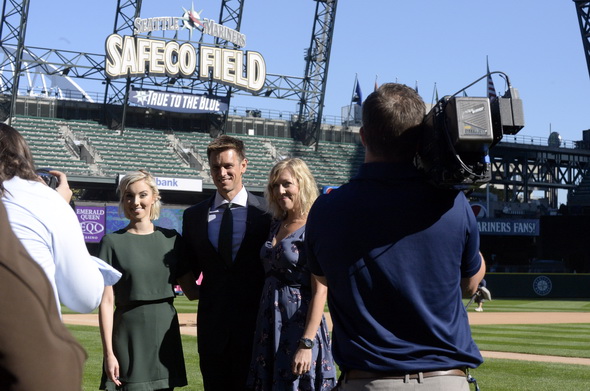 Jerry Dipoto, with his family at his Safeco introduction, won’t have problems with his new manager as he did in Anaheim. / Alan Chitlik, Sportspress Northwest

Jerry Dipoto shed a little light on his relationship with manager Mike Scioscia, with whom he had a falling-out sufficient to prompt his resignation in July as Angels general manager. Dipoto was hired in late September by the Mariners to succeed the fired Jack Zduriencik  as GM.Dipoto has been circumspect in his time in Seattle about what happened in Anaheim. But during an interview with MLB Radio Network Friday, Dipoto explained some of what happened when he disagreed on player development methods with old-school Scioscia, who enters his 16th season as Angels manager.

When Angels owner Arte Moreno sided with Scioscia, Dipoto knew he was done:

“The four years that I spent in Anaheim, and I appreciate those four years, and for much of that time I had a great time . . . But there were times where it was very difficult to do the job that I was asked to do because I was caught in between, perhaps two different dynamics. And I would say the same of them. I had some different ideas that maybe they weren’t as comfortable with, therefore we end up where we are four years from (then) . . .

Since I’ve come over here to the Mariners I’ve been fortunate enough to really, I believe, develop a very nice relationship with our ownership group, including Howard Lincoln, our chairman, and Kevin Mather, our president. They’ve been nothing but good to me since the day I got here. And they’ve been on board with a lot of the ideas that I’ve had through the course of time, and the collective ideas that we’ve come up with just in the months since I’ve been here, and given us the resources to do what we need to do . . .

As importantly, I have a manager now in Scott Servais who I do see eye-to-eye with, and we have discussed every move. We’ve disagreed on many ideas, as we’ve gone through this off-season, but in a really productive way. And fair or unfair, that was not always the case with Mike.”

For his part, Sciosia, responding to a question from MLB.com about Dipoto’s remarks, took the high road.

“I can only speak for myself, ” he said. “There are certainly times when you’re not going to agree on everything. There were times when the communication was there, maybe times where it wasn’t what it could have been. But I’m not looking back.”

Unsurprisingly when it comes to human nature and bad experiences, Dipoto chose as his manager in Seattle Scott Servais, who is completely opposite in profile from Scioscia: He has no managerial experience at any level.

There figures to be little confusion as to who is boss.