The Sounders will break in a new turf at CenturyLink Field Tuesday night when they take on Club America in the CONCACAF Champions League knockout round. 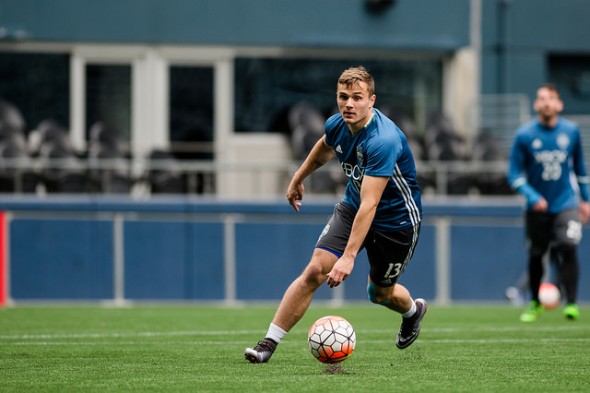 Jordan Morris worked out at the Clink this week for the first time as a Sounder. / SoundersFC.com

The Seattle Sounders will play their first game on CenturyLink Field’s new turf Tuesday, in the first leg of a CONCACAF Champions League knockout round match against reigning champion Club América (7 p.m., FOX Sports 1). Several players said the turf is preferable to the old surface, which had been worn down from five  years of abuse from the combined Seahawks and Sounders seasons.

Brad Evans and Nelson Valdez shared Dempsey’s feelings on the new field, which the Sounders hope will help reduce the glut of injuries the Sounders had through the middle portion of the season.

Club América, of Liga MX, doesn’t play league matches on artificial surfaces, but apart from a slightly faster play on the ball, the new surface won’t be much of an issue for the Mexican club that is favored to win on both Tuesday and during the return match on March 2 in Mexico City.

Tuesday’s match will be Seattle’s first home contest in 2016, with the MLS home opener March 12 against Real Salt Lake.

The Copa America Centenario draw was Sunday, landing the United States in group A alongside Paraguay, Costa Rica, and Colombia. The international tournament will run from June 3- 26, with 16 nations from CONMEBOL and CONCACAF taking part.

CenturyLink Field will host three matches: Haiti-Peru June 4, Argentina-Bolivia June 14, and a quarterfinal match between the winners of Group A against the runners-up from Group B (Brazil, Ecuador, Haiti, Peru).

The Sounders announced Monday that they have signed Nathan Sturgis. A defensive midfielder who played for the Sounders in 2009, Sturgis played 18 matches with the Houston Dynamo last season. Sturgis also played under Sigi Schmid in 2005, when the latter coached the U.S. U-20s at the 2005 FIFA Youth World Championship.