Clint Dempsey picked up a brace of goals, but Club América battled back twice in a 2-2 draw Tuesday at the Clink in the first leg of the Champions League knockout round. 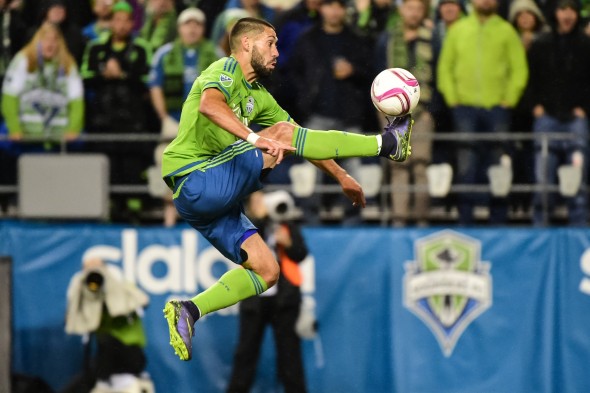 The Sounders looked like a game of red light, Rave Green light Tuesday at home against Club América in a 2-2 draw in the CONCACAF Champions League. Seattle seemed to be in full control both times Clint Dempsey scored, but defensive lapses gave up equalizing tallies front of a crowd of 42,836.

“Given the stage of our season, and the stage of (América’s) season, and the quality of the team they are, I thought we showed well,” said Sounders coach Sigi Schmid. “They stretched us for sure, but in the second half we solved that part of the problem and I was very proud of what our guys did.”

The match was the first opportunity for home fans to personally assess the new 4-3-3 that Seattle will stick with, despite the departure of Obafemi Martins. It was helpful that Schmid has openly stated that the formation is a 4-3-3, since it was hard to tell from the way it shifts throughout a game.

The dynamism involves two main spots, the outside backs Joevin Jones and Tyrone Mears, who would range forward into the attacking third, and the interplay between Clint Dempsey on the left wing and Andreas Ivanschitz in a central attacking midfield role. Dempsey and Ivanschitz flowed around one another, using their spacing to open channels into the corner for the wings.

The formation had its weaknesses, namely the contrast in speed between the outside backs and the center backs. Forward runs by Jones and Mears meant that they were hard-pressed to make key defensive contributions after quick turnovers, and center backs Chad Marshall and Brad Evans struggled to make up for their absences. This disparity led to the visitors’ first goal.

Dempsey opened his 2016 scoring account in the 42nd minute, when he ran up to a free kick from 25 yards and curled it into the upper right corner of the net.

The defending Champions League titlists took the wind out of Seattle’s sails, however, when they zipped a goal back three minutes later thanks to a long ball that left forward Carlos Quintero the time he needed to burn Chad Marshall and Brad Evans. He slotted a low roller past Stefan Frei, to the delight of several hundred fans in yellow jerseys that had come to from across the country to see on of Liga MX’s giants.

Dempsey grabbed his second in the in the 52nd minute, when he connected with an Ivanschitz corner kick swung in from the right side and it trickled in to the net.

América countered in the 70th minute, when Rubens Sambueza cut back from the goal’s right side and lifted a waist-high cross just above the six-yard box. Oribe Peralta lashed out, uncovered by Evans and right back Tyrone Mears, and flicked the ball into the net to help Club América pick up a crucial second road goal.

“(Sambueza) gets in on his left foot, and then they’ve got (Peralta and Quintero) in the box, and we have two defenders but we’re really not marking . . . Peralta, that’s his bread and butter,” said Schmid.

Peralta’s bread and butter don’t mean that the Sounders are toast as they head down to Estadio Azteca to face América again March 2, but due to the use of road-goals as a tiebreaker, a loss or 1-1 draw will mean the end of their Champions League campaign.

With the first game out of the way, Seattle has a chance to settle nerves and make a genuine run at the Champions League title if they can beat Club América. If they can’t, then Tuesday’s match suggests the potential for a strong league season against MLS teams when the regular season begins at Sporting Kansas City March 6.

Jordan Morris had an up-and-down first game as a Sounder. The 21-year-old Mercer Island native managed to win a pair of corners for the home team, and nearly headed home a go-ahead goal in the 12th minute, had it not been for an off-the-line swat from América’s keeper, Hugo González.

Other times, Morris seemed to disappear for long stretches, isolated on the outside of the field, apart from a pair of late breakaways that faltered when support was late to arrive.

“There are still little idiosyncrasies that he’s got to work out,” said Schmid. “This is a little bit of a different position for him, I don’t think we got enough of an opportunity to see his pace . . . to put people off his shoulder, we saw a little bit, but I think his game will get better.”