After saluting Marshawn Lynch, coach Pete Carroll said that he expects Thomas Rawls to be ready for training camp. But another injured star, TE Jimmy Graham, won’t be back until the regular season. 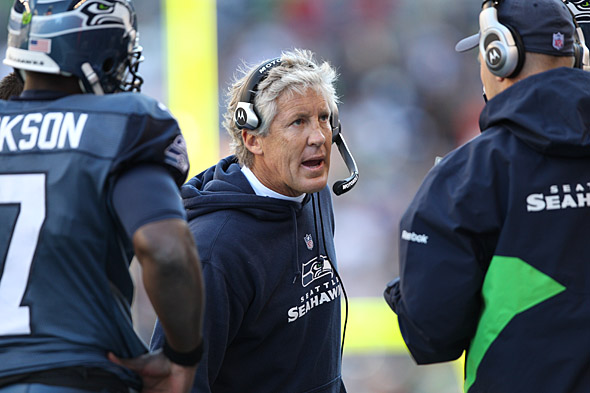 Seahawks head coach Pete Carroll used most of his nine-minute stint at the NFL Combine microphone Thursday at Lucas Oil Stadium in Indianapolis to address the retirement of RB Marshawn Lynch and the rehabilitation progress of Lynch’s presumed replacement in Seattle’s backfield, Thomas Rawls.

Carroll said he was amused by the way Lynch announced the end of his career, by posting online during the fourth quarter of the Super Bowl a photo of his cleats dangling from a wire, an image free of words.

“Marshawn’s retirement had been in the works for some time, so it wasn’t a surprise at all,” said Carroll. “We just wanted to see how it would play out and how he would get the word out, and it was kind of fun the way he did it.”

Lynch, 30, ran for 6,347 yards and 57 touchdowns for the Seahawks, who acquired him in a trade with Buffalo early in the 2010 season. But in 2015,  he played in seven games  because of a variety of injuries, including a sports hernia that required mid-season surgery.

“A lot of good things happened when Marshawn came to Seattle. We didn’t know how special he would be, but his style fit into the type of mentality we were trying to bring to the program. He brought an exciting attitude and it worked out really well.”

Rawls played in 13 games and made seven starts after Lynch was forced out with injuries. But Rawls, who ran for 830 yards and four touchdowns,  broke an ankle that required surgery. Now, Rawls and futures-contract signee Cameron Marshall are the only running backs under contract for the 2016 season. Bryce Brown, Fred Jackson and fullback Will Tukuafu are unrestricted free agents while Christine Michael and fullback Derrick Coleman are restricted free agents.

“Thomas is going to get a great shot to start,” said Carroll. “He did everything he could in his rookie season to make a statement that he belongs. We love his style, he’s a great kid, and I cannot imagine that he won’t be right in the middle of it.

“He’s recovering really well (from the broken ankle). He’s in really good shape right now. It’s been a haul for him, but he’ll make it to camp.”

“He’s ahead of schedule in his rehab, but this injury will take him to the end of camp,” said Carroll. “We expect him to be back and battling. but we won’t rush him at all in camp. We’ll just see how it goes. But we ultimately have big expectations for a great recovery.”

Carroll did not hint at what the Seahawks might do in the draft, but was asked about upgrading the offensive line, especially considering that tackle Russell Okung and guard J.R. Sweezy are unrestricted free agents.

“We looking at how we dealt with the offensive line in the first half of last season and how we transitioned in the second half,” said Carroll. “After the bye, we improved tremendously and our numbers flip-flopped in terms of the pressures and sacks. We saw the productivity of our passing game really go up.

“We still have some issues. We have some issues going into free agency (Okung, Sweezy). So we’ll see how all that winds up. Hopefully, we’ve made enough strides that we can start at a better level next year than we did last year.”

WR Jermaine Kearse is also an unrestricted free agent and said he won’t give the Seahawks a “hometown discount.”

“We’ve got a great group of receivers,” Carroll said, referencing Kearse, Doug Baldwin and Tyler Lockett. “They fit with our quarterback and our coaching staff. We’d like to have all those guys back together.”

Barring a trade, the Seahawks will select 26th overall in the first round April 28.