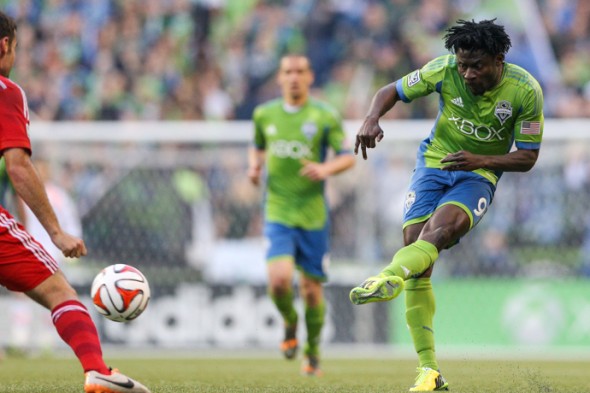 The Sounders Thursday made it official: Forward Obafemi Martins has been transferred to Shanghai Greenland Shenhua FC of the Chinese Super League for what is reported to be at least $2 million. The Nigerian forward signed with the Sounders as a designated player in March 2013 and scored 40 goals in 72 MLS appearances.

“We wish Obafemi success on his next challenge,” said Sounders GM Garth Lagerwey. “Ultimately, this transaction gives us roster and salary cap flexibility heading into our 2016 MLS season, including the opening of a designated player position. We have a talented and capable group in our locker room, and we’re excited for the year ahead.”

At Monday’s media luncheon, Lagerwey said not having to pay Martins’ $3.6 million salary as a designated player  — he reportedly will make $6.6 million in Shanghai — will help the roster.

“In a perfect world, I don’t want three DP forwards,” he said. “Particularly when arguably our best young player, Jordan Morris, is also a forward. We would like to have more balance in the team from front to back.”

Martins, 31, started 66 of 72 regular-season appearances. In addition to scoring 40 goals, the had 23 assists. He led the club in scoring three consecutive seasons, including a club-record 17 goals in 2014 en route to a runner-up finish for MLS MVP Award.

A veteran of the Nigerian national team, Martins’ previous stops include Internazionale, Newcastle United, VfL Wolfsburg, FC Rubin Kazan and Levante FC. His stay with Seattle was the forward’s second-longest stint with one club of his seven-club career.

The Sounders opened their season Tuesday with a 2-2 draw against Club America in the first leg of the CONCACAF Champions League quarterfinal round. Seattle heads to Mexico City for the return leg of the series Tuesday (5 p.m. PT / FOX Sports 2, Univision, KIRO Radio 97.1 FM) before opening the MLS campaign March 6 at CenturyLink Field against Sporting Kansas City.