Sounders must slay giants to become one

The Sounders talk steadily about becoming a world-class club. Wednesday’s Champions League against Club América in Mexico City is a chance to put some walk behind the talk. 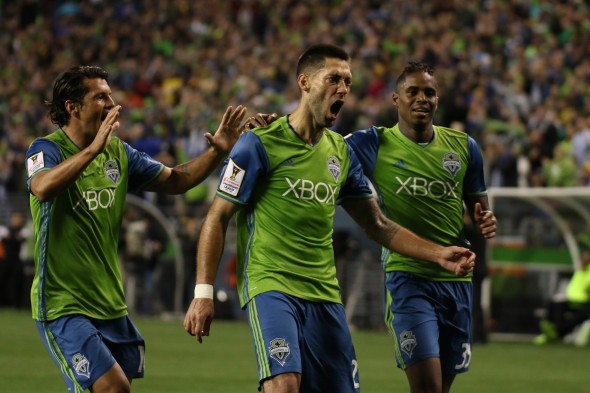 For the Seattle Sounders, Wednesday’s match against reigning CONCACAF Champions League titleholders Club América (5 p.m., FOX Sports 2) will be one of their most important competitions of the year. The game in Mexico City’s Azteca Stadium will determine not only whether the Sounders move into the semifinal round, but whether they are any closer to their dream of becoming an international super-club.

Problem is, the Sounders are walking into a title fight after barely enough time to put their gloves on.

In Club América, the Sounders face the most decorated club in CONCACAF. América turns 100 in October. In that century, it has six CONCACAF Champions’ Cup/Champions League titles (a record), five Copa México Cups (a record) and twelve Liga MX titles (you guessed it—a record).

The Sounders, meanwhile . . . are a very good MLS team. They have three Open Cup titles, and one Supporters’ Shield, but are without the major hardware boasted by their foes. They’ve never even had the displeasure of losing an MLS Cup final.

That’s not to say that the Sounders are outmatched by América on account of history (the Mexican club’s speed and technique are the sources for that). In the span of 90 minutes, history means squat. What’s at stake for Seattle is the chance to define itself within a historical moment; to walk the talk.

Owner Adrian Hanauer and GM Garth Lagerway often say that they want the Sounders to become one of the biggest clubs in the world. It’s a polite version of the fans’ vision of the Rave Green, enshrined in the sports pantheon of the Emerald City as well as American  lore, a big-time club that can deliver in the clutch.

Attaining either version of said vision will take two things: A track record of success (read: trophies), and a higher profile image of the league in which they participate. The Champions League affords opportunity in both categories.

In a way, the Sounders want to be Club América, wealthy, successful; the team that no one wants to play. It is fitting that to win the Champions League the Sounders will have to find a way to beat Las Águilas on their home turf after a 2-2 draw at home in the first leg.

A Champions League title would go a long way toward providing validation of Seattle’s visions, especially since the club hopes to lift the MLS Cup onto its mantle come December.

That is why the Champions League is so important, even if its MLS participants are at a disadvantage in the knockout rounds due to the timing of the tournament. The quarterfinal takes place before the beginning of MLS play, but in the middle of most other leagues’ seasons, when teams are in shape and have the familiarity of real-game experience.

Tuesday, D.C. United and the Los Angeles Galaxy were eliminated by their Liga MX opponents, leaving only the Sounders and Real Salt Lake in the running. With RSL already down 2-0 on aggregate, the Sounders have the only real MLS shot to win its first Champions League title.

Is it unreasonable for one team to shoulder the burden of a frustrated American fan base and, indirectly, the image of an upstart league looking to assert itself on an international level? No. Super clubs are seldom subjected to reasonable expectations.

A loss means they still are not ready for the apotheosis in the soccer world. It will signal that Seattle is still just an MLS club, with all the advantages and drawbacks that entails.

Wednesday’s match isn’t quite a match of David and Goliath, but few will be surprised if the Sounders wake up Thursday morning, look at their trophy case, and sigh, “Someday.”