Another disappointing regular season closes Wednesday when the Huskies host the Cougars in the final home game for fifth-year senior Andrew Andrews, the loyalist. 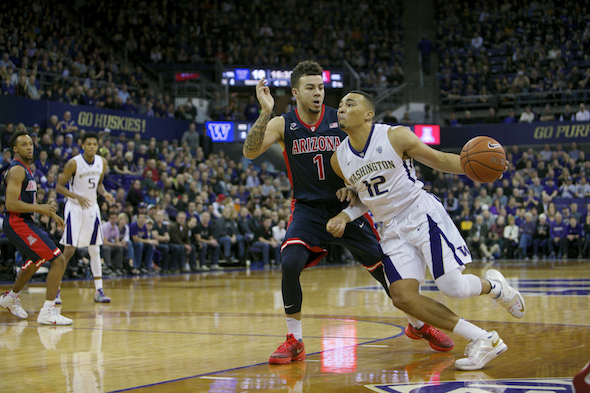 “He was going to go to prep school, but then Isiah Thomas declared for the draft, so that opened up a scholarship,” said Romar Tuesday. “So we said, ‘Come down, and learn our system, and then the following year the path will be even more clear.’ That’s what he did. A lot of kids would not have done that.

“He was loyal coming in, and he’s loyal on his way out.”

Loyalty means a great deal to Romar, who endured a string of transfers after a disappointing season in 2014-15 that left Andrews as the only returning regular.

Wednesday’s contest against the Cougars will mark the final regular season game of another disappointing season, albeit one that has shown improvement and still has a glimmer of hope.

Romar said his team was still fighting to make the NCAA tournament, but a win against the last-place Cougars in a conference lacking a high-profile tourney seed won’t provide much solace. At this point, the Huskies’ March Madness dreams rest on winning the conference tournament to secure an automatic berth.

Romar was quick to point out that his team wasn’t looking past Washington State, who played his team close in a 99-95 Washington win at the beginning of a conference schedule that seems an epoch ago.

Along the way, the Huskies have matured. Andrews will almost certainly finish as the Pac-12’s leading scorer. Marquese Chriss went from fouling out against WSU with two points to averaging 13 points a game, and Washington is leading the conference in blocks and steals.

They have also lost the magic that helped them to such a fast start. Washington has lost six of its last seven. A win, even an expected one against a weaker foe, might help in restoring confidence ahead of the postseason.

“There’s one thing that we don’t have that we had earlier,” said Romar. “There was a certain, if you want to call it ‘swagger,’ that we had There’s a lot of emotion there. These games, that emotion hasn’t been there as much. That’s the only thing that’s different.”

Little time remains for the Huskies to recover their swagger for a serious push for the national tournament. For most of them, however, another season looms to improve upon this year’s failures.

For Andrews, Wednesday will mark his last time on the hardwood floors at Montlake.

Few athletes ever get to end things on their own terms. Washington has mountains to move to prove the exception rather than the rule for Andrews, who no doubt would love to end his collegiate career at the big dance.

Still, the 22-year-old sounded ready, if need be, to enter the portion of his life where people discussed his legacy.

“Everyone cares to a certain extent how they’re viewed,” said Andrews. “If the only thing I was viewed for was being loyal, that would be perfectly fine with me. I think I could take that.”

Andrews, Romar and the Huskies hope the end waits just a little longer.