Gonzaga’s Sabonis is a pro among WCC boys 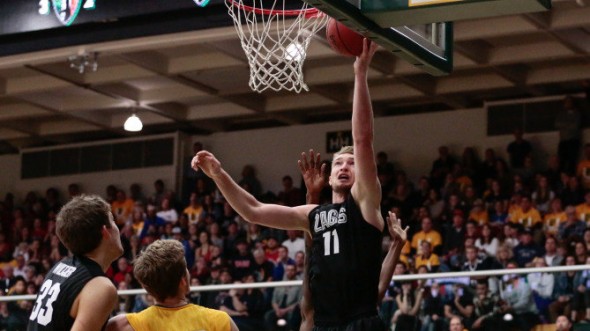 “He’s an NBA player playing in college,” Murphy said after Sabonis sank 12 of 13 shots and scored 26 points in just 18 minutes against NAU this season.

Murphy’s complimentary exaggeration may become fact as soon as next season. NBA draft boards, for the second year in a row, predict Sabonis will be taken in the first round, should he pass on his next two years of college eligibility.

If Sabonis has made a decision on turning pro or remaining in school, he’s not ready to share it publicly.

“I have no thoughts about that,” Sabonis said. “I’m just thinking about this team right now.”

“Right now” consists of the West Coast Conference tournament, which kicks off Friday at The Orleans Arena in Las Vegas. The three-time defending champion Bulldogs (who debut Saturday against seventh-seeded Portland) are 23-7 and seeded second, but an 18th consecutive trip to the NCAA tournament might be in jeopardy if they don’t earn an automatic berth by winning the conference tourney.

All season, Gonzaga has consistently faltered at crunch time against top opponents. That said, the Bulldogs would be far more vulnerable if not for the skill, spirit and sweat of Sabonis.

“He’s so open to coaching and so receptive to it and hungry for it,” Gonzaga coach Mark Few said after a recent practice. “And then he’s got this work ethic that’s just insatiable.

“The guy’s going to give you everything he’s got in practice, go ‘ice up,’ get something to eat, study a little bit and then come back down here at 9 o’clock tonight and start shooting with Wiltj (WCC scoring leader Kyle Wiltjer).

“When you have that kind of attitude paired with a really, really bright, intelligent, quick-learning kind of mind, the sky’s the limit.”

After averaging 9.7 points and 7.1 rebounds as Gonzaga’s top reserve last season, Sabonis now averages   17.2 points and 11.9 rebounds as a starter. The 6-foot-11, 240-pound forward ranks sixth in the WCC in scoring, and he’s first in rebounding and double-doubles (19) and third in field-goal shooting percentage (60.2).

Through Wednesday, Sabonis ranked sixth in the nation in rebounds and eighth in double-doubles. He attacks the glass like a starving teenager attacks a ham sandwich.

“I always tell him he needs to stop stealing them all because I can’t get as many,” Wiltjer joked. “The guy’s just a fierce competitor, and he rubs off on us.”

Sabonis spent his early years in Portland when his father, Hall of Fame center Arvydas Sabonis, played for the NBA’s Portland Trail Blazers. The family moved to Spain after Arvydas retired from the NBA, but vacations were spent in Arvydas’ native Lithuania, and Domantas played on that country’s national team last summer.

After seeing limited action for two years in Spain’s top pro league (and maintaining amateur eligibility by not signing a contract), the younger Sabonis decided, “I wanted to play college basketball, and Gonzaga was perfect.”

“I thought Gonzaga was the best,” Sabonis said. “Just the family environment, the love when I came here (on his campus recruiting visit).

“Tommy was the first one to recruit me. He did a really great job.”

The same can be said for Sabonis, on and off the court. A sport management major, he carries a 3.46 grade point average and was named to the All-WCC Academic team as well as the regular All-WCC team. Thursday came word that he was a second-team Academic All-America selection.

Not that Sabonis is faultless. Sabonis shares an apartment with teammates Josh Perkins and Kyle Dranginis, and Sabonis’ roommates say the big guy is a) a great roomie and b) an awful cook.

“He TRIES to cook,” Perkins said with a sneer.

“His demeanor on the court is aggressiveness and just a ferocious attitude,” Dranginis said. “Off the court, he’s a goofy, funny guy. Likes to have fun.”

For Sabonis, “fun” includes long hours of hard work on his game.

“His work ethic is right there with his skill level,” Perkins said. “He’s in here (the gym) every night. He puts his time in.”

“I think I’ve always had that (a good work ethic),” Sabonis said. “It’s in my blood. I want to win. I just try my best on the court to help my teammates.”

ESPN carries the Gonzaga-Portland game at 9 p.m. Saturday. All tournament games will be televised and available online (including the women’s games, which began Thursday), but it takes some work to locate the various networks. Go to wccsports.com for details . . . Gonzaga tied Saint Mary’s for first place at 15-3. The Gaels earned the No. 1 seed by going 2-0 against GU . . . Portland has lost five in a row to Gonzaga, and 25 of the past 26 meetings . . .The Pilots average a league-leading 9.1 3-pointers per game and a league-worst 79.4 points allowed per game . . . Gonzaga led the nation through Wednesday in 3-point defense (28.5 percent) and was second in defensive rebounds (29.7) . . . Point guard Alec Wintering leads Portland with 18.4 points, 5.0 assists and 1.6 steals. He shoots 39.6 percent from beyond the arc and leads the conference with 221 free-throw attempts . . .  Wiltjer, voted Most Outstanding Player at last year’s WCC tournament, averages 20.8 points . . .  Gonzaga was ranked ninth in the preseason Associated Press Top 25 poll, but Saint Mary’s was the only WCC team to even receive votes (three) in this week’s poll . . .  Through Wednesday, Saint Mary’s led the nation in field-goal shooting percentage (50.8) and assist-turnover ratio (1.8). The Gaels were fourth in scoring defense (60.4) . . . The men’s and women’s title games are Tuesday. Sunday is an off day for everyone, since Mormon-run BYU forbids sports competition on Sundays . . .  It’s been a down year by Gonzaga’s lofty standards for men and women, but several thousand GU fans are again expected to make up a large portion of the crowds . . . Pacific’s men (8-20), anticipating NCAA sanctions for academic improprieties, voluntarily withdrew from postseason competition.