According to an ESPN report, Seahawks free agent wide receiver Jermaine Kearse does not plan on returning to the team in 2016 and is looking forward to finding a new team. 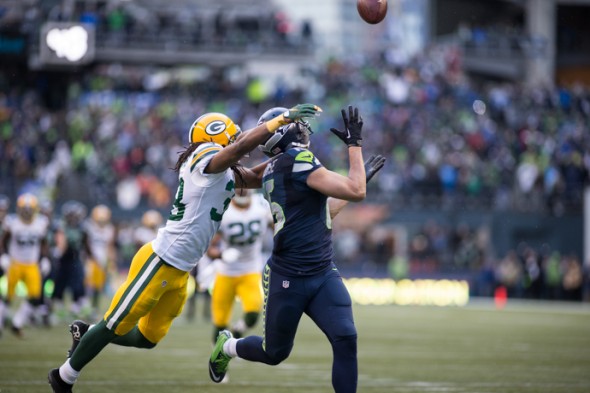 Seahawks WR Jermaine Kearse at the moment that decided the NFC Championship at the Clink in January, 2015. / Drew McKenzie, Sportspress Northwest

Seahawks wide receiver Jermaine Kearse, a fifth-year unrestricted free agent, reiterated Thursday  he “does not plan to return to the team” and is “looking forward to finding a new home,” according to ESPN’s Adam Schefter, who tweeted Kearse’s sentiments in advance of the start of the NFL’s free-agency signing period March 9.

In late January, Kearse, a University of Washington graduate and a former Lakes High School star, announced he would not give the Seahawks a “hometown discount” due to the fact that he has “put in too much hard work” to do that.

Seahawks WR Jermaine Kearse reiterated Thursday that he does not plan to return to Seattle and is looking forward to finding a new home.

“My No. 1 priority is to take care of my family’s future, so I will consider all opportunities,” Kearse added.

Based upon Schefter’s report, Kearse has determined, presumably based on his agent’s conversations with management, that his best financial opportunity is elsewhere.

“Unfortunately, there’s a business side to this league,” Kearse said. “So you just kind of got to wait for that process to happen.”

“He’s a terrific player,” head coach Pete Carroll said of Kearse in his season-ending press conference from the Virginia Mason Athletic Center in Renton. “He really is. I don’t know if other people appreciate him like we do. We love him in our system, and we’d love him to stay with us.”

Kearse, who finished the 2015 season as Seattle’s No. 3 wide receiver behind Doug Baldwin and rookie Tyler Lockett, made $2.3 million last year, when he had 49 catches for 685 yards and five touchdowns, career highs for a player who signed with the Seahawks as an undrafted free agent in 2012.

OverTheCap.com has predicted that Kearse’s value will be $9.5 -$10 million over the next three years, which would be a significant jump in price for the pass-catcher. That is probably too rich for the Seahawks, who have $23.3 million in cap space but will likely have to move on from a receiver who delivered three huge playoff games in his four years with the team.

In Super Bowl XLVIII, Kearse helped lead the Seahawks to their first NFL title with four catches for 65 yards, including a 23-yard touchdown catch in the third quarter, breaking four tackles to get into the end zone.

In the 2014 NFC Championship against the Green Bay Packers, Kearse caught one ball, a 35-yard game-winning overtime touchdown to give Seattle a 28-22 win after it fell behind 16-0 at halftime. The victory sent the Seahawks to the Super Bowl for the second year in a row.

In January’s divisional playoff loss to Carolina, Kearse had 11 receptions for 110 yards and two touchdowns. Kearse is Seattle’s all-time leader in postseason touchdowns with six.

In four regular seasons with the team, Kearse caught 112 passes for 1,599 yards and 10 touchdowns, averaging 14.3 yards per reception.

Among players who caught at least one pass, the Seahawks have Baldwin, Lockett, Kevin Smith, Kasen Williams and Paul Richardson under contract at receiver. They also have TE Jimmy Graham returning from injury.