The 17-13 Huskies have a solid chance against 15-14 Stanford in Pac-12 Conference tourney opener in Las Vegas. The -21 Cougars are merely trying to avoid a 17th consecutive loss. 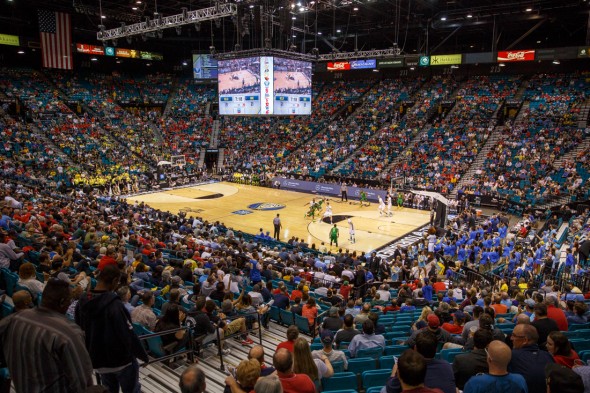 For the first time, the MGM Grand Garden Arena is sold out for the Pac-12 Conference men’s basketball tourney. / MGM Grand

LAS VEGAS – Welcome to Sin City, the national headquarters for regrettable decision-making. In other words, the perfect setting for basketball fans to witness the latest car crash resulting from another year of forgettable recruiting at Washington State.

Many factors have contributed to WSU’s mind-numbing run of 75 years without a conference championship in men’s hoops, but poor recruiting stands front and center. This rings especially true in 2015-16, considering that WSU’s seven newcomers tip-toe into the Pac-12 Conference tournament averaging a combined 27.4 points over all 30 games.

How bad is that? Well, it’s less than half the 58.9 average of Washington’s top seven newcomers. Two Washington freshmen (Dejounte Murray and Marquese Chriss) combine for more points (28.1) than all seven Washington State newbies. WSU’s only two freshmen, Viont’e Daniels and Robert Franks, combine for 3.2 ppg.

Washington’s stellar recruiting class and senior guard Andrew Andrews give the eighth-seeded Huskies (17-13) a decent chance to make some noise when the Pac-12 tournament begins Wednesday at the MGM Grand Garden Arena. Washington State’s snore-inducing recruiting class gives the 12th-seeded Cougars (9-21) an excellent chance to make it back to Pullman in time for Thursday classes.

The Huskies lost six of seven games before playing spectacularly at times in a 99-91 triumph over WSU last Wednesday in the regular-season finale for both teams. Washington coach Lorenzo Romar dismissed the idea that his young team may have grown fatigued down the stretch.

Andrews scored a career-high 47 points in a sensational performance against the Cougars. The Huskies did blow most of a 27-point lead against a last-place team losing its 16th consecutive game, but Andrews said Washington’s strong play much of the game provides his team with a “huge” lift heading into the four-day tournament.

“I 100 percent believe we can win four games,” Andrews said.

“We’ll be fresh and ready to go,” Romar promised.

“We are an elite team,” Andrews said.

Whoa, Andrew. Elite teams do not rank last in the conference in defense and rebounding margin and next to last in field-goal shooting percentage and 3-point shooting percentage. They don’t go nearly two months without winning consecutive games (Jan. 16 and 20). And they certainly don’t have to hang on to beat a really bad Washington State team by four points (in overtime) and eight points.

The Huskies possess the type of athleticism and offensive explosiveness that can keep them in any game. Of course, lax defense, excessive fouls and careless turnovers are standard at the Dub, and a lack of size causes problems on the boards. Washington likely will settle for an NIT appearance, which would be no small achievement for a team that has started three or four freshmen all season.

As for WSU, coach Ernie Kent must shoulder much of the blame for the Cougars’ miserable season, since his first two recruiting classes have produced jack squat. There’s little question the charming, energetic Kent knows how to recruit, since two of his Oregon teams reached the Elite Eight round of the NCAA tournament.

To date, however, Kent has not altered a history of poor recruiting on the Palouse. Three of WSU’s four newcomers in 2014 – when Kent and his staff were hired too late to have a legitimate shot at top recruits – did not make it to Year Two. Lone survivor Ny Redding is a marginal contributor.

It’s not as if Ken Bone, Kent’s predecessor, aced his recruiting exams. Junior Longrus and Brett Boese, WSU’s only seniors, have totaled 479 points in four seasons. Andrews, Washington’s only senior, has scored 637 points (a league-leading 21.2 per game) this season alone.

Understandably, Kent asks for patience while rebuilding a broken program. At times, however, Kent’s seemingly boundless optimism may do more damage than good.

Kent did his inexperienced squad no favors when he declared the Cougars to be “a very talented team” after the preseason Pac-12 media poll correctly forecast WSU to finish a distant last. Kent saved an even more nonsensical comment to mark the Cougars’ 13th consecutive loss.

“It’s not losing,” Kent said with a straight face. “It’s learning. You’re learning what you have to do.”

A word of warning, Ernie: Two or three more years of this type of “learning” will teach you a lesson about unemployment.

Washington beat Stanford 64-53 Feb. 20 in Seattle in the only meeting between the teams. Both sides shot poorly in a sloppy contest. The points allowed was a season low for the Huskies, and they tied their season low for points scored . . . Andrews is Washington’s only first-team all-conference player, and senior forward Rosco Allen is the only one for Stanford. The 6-foot-9 Allen scores inside and outside and leads five Cardinal players in double figures with 15.7 points per game . . . Washington’s advantage in athleticism led to many of Stanford’s 20 turnovers in Seattle . . . The Huskies lead the conference in scoring (83.3), blocked shots (6.8), steals (7.7) and turnover margin (plus-2.5) . . . Through Monday, Washington led all 346 NCAA Division I teams in blocked shots and ranked ninth in scoring and turnovers forced (16.5). Only The Citadel (S.C.) was drawing more fouls per game than Washington’s 24.1 . . . Andrews ranked second in free throws made (241) and attempted (285).

Former Shorewood High School star Josh Hawkinson, who grew up a Huskies fan, leads the Cougars with 15.6 points. For the second year in a row, he leads the conference in rebounding (11.0) and double-doubles (20). The latter mark ties his year-old school record . . . Hawkinson and pretty much all the Cougars struggle defensively. First-team all-conference forward Josh Scott averages 16.5 points for Colorado. Scott also made the all-conference defensive team. . . WSU played Colorado tough in both meetings this year, losing 75-70 in Pullman and 88-81 in double overtime in Boulder. Scott missed the second game with a back injury . . .WSU hasn’t won a game at the tournament since knocking off the Oregon Ducks in 2009. Oregon’s coach that season? Ernie Kent.

The Washington-Stanford winner faces eighth-ranked Oregon (25-6) in Thursday’s quarterfinals. Oregon is seeded No. 1 after winning the regular-season title. The top four seeds receive first-round byes. Everyone else has to win four games in as many days to claim the tournament championship . . .  Perhaps as many as seven Pac-12 teams will go on to the NCAA tournament, but only the conference tournament champ earns an automatic berth . . . Fourth-seeded Arizona, the defending Pac-12 tourney champion, has won a record five of the 18 conference tournaments. . . Washington won in ‘05, ’10 and ’11.  . . . Washington State owns the worst record in tournament history at 5-16 (.238). Washington stands fifth at 17-14 (.531). Colorado leads at 8-3 (.727). The Cougars have lost a record-tying seven consecutive games at the tournament.

WSU’s last conference title came in 1940-41 in the Pacific Coast Conference (a forefather of the Pac-12). The Cougars lost to Wisconsin in the NCAA title game that year . . . Attention, pro scouts: Boese recently informed the media that he has no plans to pursue a professional career in basketball. Boese has started eight games on four losing teams at WSU and has a career scoring average of 2.6 . . . The tournament has sold out every game for the first time. The Pac-12 is considering a move to a new arena under construction in Las Vegas. It will be seat approximately 19,000 for basketball, about 6,000 more than the MGM Grand Garden Arena . . . WSU finished a distant last in Pac-12 attendance with 2,857 per game. As usual, Arizona led the league (14,527). Washington ranks seventh at 6,978.

All games will be televised on the Pac-12 Networks except the late game Thursday, Friday and Saturday on Fox Sports 1.