To firefighters and paramedics in Redmond, WR Ricardo Lcckette explained the gravity of the neck injury he had in the Nov. 1 game in Dallas. One wrong move in the moments after collision could have been fatal. 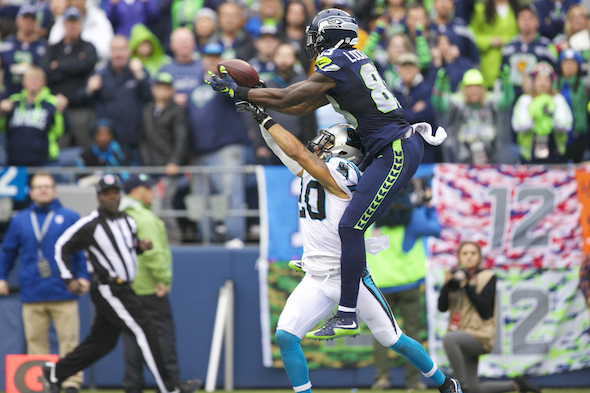 Ricardo Lockette made one of his greatest catches during the game against Carolina in the 2015 regular season. / Drew Sellers, Sportgspress Northwesf

In a dramatic retelling of the scariest moment of the Seahawks season, WR Ricardo Lockette posted a video saying that he would have died in Dallas after his collision with a Cowboys blocker had not the trainers and medical personnel handled his severe neck injury flawlessly.

Lockette was covering a punt return in Seattle’s 13-12 victory over the Cowboys Nov. 1. He was hit by Cowboys safety Jeff Heath, then lay motionless on the field before he was carted off.  He had a concussion, along with disk and ligament damage in his neck. He underwent successful surgery. He continues to wear a neck brace and faces a long road to recovery.

Lockette recently visited firefighters and paramedics at a fire station on Redmond and posted the video of the conversation on Facebook.

“I didn’t really realize how serious it was until it was over,” he said. “The doctor told me . . . all the muscles, all the ligaments that connect my vertebrae, and the cartilage between that . . .the cartilage is out, ligaments are torn. He said if I would have stood up then, the weight of my head — left, right, front, back — I would have died.

“If one of my teammates would have came over and pulled my arm, just barely, I might have died. Or if the returner had broken a couple tackles and fell on me, I would have died on that field.

I thank God that I’m here. I thank you guys for the work that you do. And if there’s anything that I can do to help you save another life or whatever it takes — me, my teammates, my family or your workers. I appreciate the opportunity and hopefully I can help you guys. ”

Lockette said after his return to the Clink Nov. 15 against Arizona to cheer on his team, that it was his intent was to rehab after the surgery and return to his career.