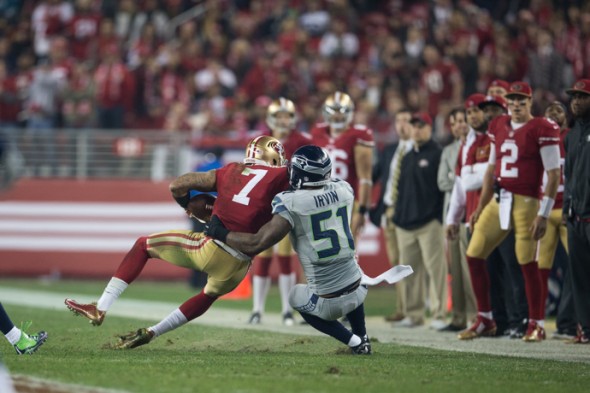 LB Bruce Irvin hit the NFL free agent market at the right time, getting a whopping $37 million from the Oakland Raiders for four years, which includes a guaranteed $14.5 million for 2016. He became the first Seahawks departure on Wednesday’s first day of free agency.

Irvin, Seattle’s first-round draft pick in 2012, had his fifth-year option declined by the Seahawks last year, which would have paid him $7.8 million. He reportedly drew interest from the Jacksonville Jaguars and Atlanta Falcons, both coached by former Seahawks’ assistants Gus Bradley (Jaguars) and Dan Quinn (Falcons), but instead with Ken Norton Jr.., now the Raidera defensive coordinator is Ken Norton Jr., another one-time Seattle assistant who worked under Pete Carroll.

Irvin was considered one of the top defensive players available in free agency, ranking fifth on NFL.com’s top 99 free-agent list.

Too my brothers of the 2012 draft class what we did by coming in and changing this organization… https://t.co/EvN0FmrpxY

Irvin is the first of 17 unrestricted free agents on Seattle’s roster to leave the team, which signed DT Ahytba Rubin to a three-year, $12 million deal Tuesday.

QB Matt Hasselbeck, who quarterbacked the Seahawks from 2002 through 2010, retired from the NFL Monday after 18 seasons. Hasselbeck will join ESPN as an analyst.

The 40-year-old Hasselbeck came to the Seahawks in 2001 in a trade with Green Bay and threw for 29,434 yards and 174 touchdowns over the next decade, becoming the franchise leader in both categories.

After Pete Carroll took over in 2010, Hasselbeck left in free agency and signed with the Tennessee Titans. After three years in Nashville, Hasselbeck moved to the Indianapolis Colts. He made eight starts last season when Andrew Luck went down with an injury and guided the Colts to a 5-3 record.

Hasselbeck threw for 36,638 yards and 212 touchdowns in his career, appeared in three Pro Bowls (all with Seattle), and quarterbacked the Seahawks in Super Bowl XL.