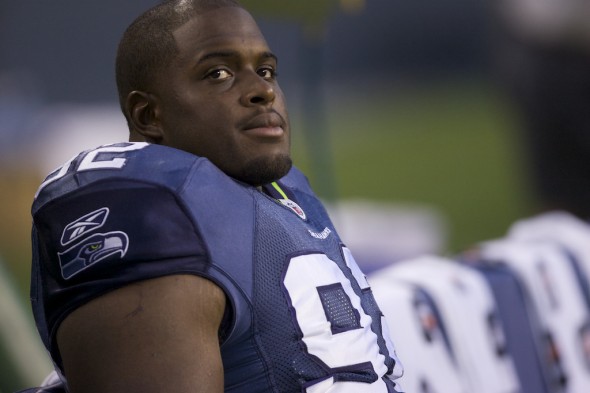 DT Brandon Mebane and OG J.R. Sweezy followed LB Bruce Irvin out the door Wednesday, both signing three-year deals with the San Diego Chargers and Tampa Bay Bucs, respectively. Irvin earlier signed a four-year deal with the Oakland Raiders. The Seahawks are down three veteran starters in the first day of the NFL’s free agency.

Although Mebane, 31, said recently that he wanted to remain with Seattle, he found a more enticing offer in San Diego. Mebane’s deal is reported to be worth $13.5 million, with $5.5 million guaranteed. Last year with the Seahawks, he made $5.1 million.

A third-round pick from Cal in 2007 by former coach Mike Holmgren, Mebane (6-foot-1, 311 pounds) spent nine seasons with the Seahawks — the longest tenured scrimmage player. He was a two-down nose tackle who played 49.1 percent of the team’s snaps last year when the Seahawks held opponents to 3.6 yards per carry (third-best in the NFL).

Mebane has started the past 125 games he’s played, and has 349 tackles and 15.5 sacks. He’ll slot into a defensive line that’s anchored by Corey Liuget and also includes Sean Lissemore.

Sweezy, a seventh-round pick in 2012 who played on the defensive line at North Carolina State, made steady progress during his four years with the Seahawks. His deal has been reported at $32.5 million over five years, way more than the Seahawks could afford.

He served as line depth during his first season before starting 46 of a possible 48 games over the remaining three years of his rookie contract. Sweezy started all 18 games for the Seahawks last season.

At 6-foot-5 and 296 pounds, Sweezy has blocked for a top-five rushing offense in each of his three years as a starter. Last year, the Seahawks had their best season of overall offense under Pete Carroll, finishing third in total yards.

In Tampa, Sweezy will get a chance to replace retired guard Logan Mankins.

The Seahawks announced Wednesday their contract tenders to other categories besides unrestricted free agents.

The one exclusive free agent not offered was oft-injured DT Jesse Williams, who was waived.