Huskies advance with a rout; Cougars out

Stanford barely showed up while the Huskies played their most complete game of the season in 91-68 win at Pac-12 hoops tourney. Colorado blows out Cougars, 80-56. 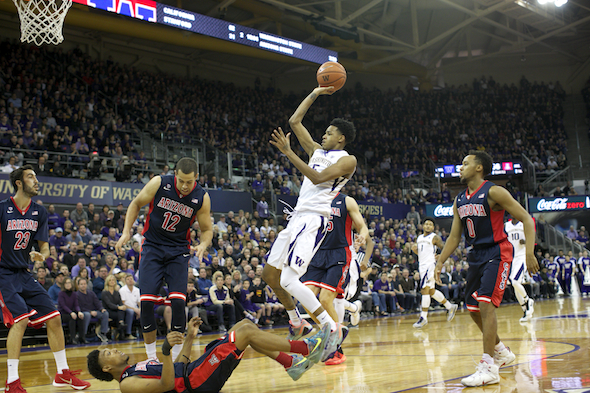 LAS VEGAS — One year after Stanford ended Washington’s basketball season in heartbreaking fashion, the Huskies skipped on dramatics in favor of a quick execution of the Cardinal when the teams met in the first round of the Pac-12 Conference tournament for the second consecutive year.

The Huskies, led by a dazzling group of freshmen who showed zero signs of stage fright in their first postseason appearance, bolted to early leads of 10-0, 15-2, 20-3, 24-5, etc., and buried Stanford 91-68 Wednesday afternoon at the MGM Grand Garden Arena.

Infinitely more athletic than Stanford, the Huskies were every bit as sensational as the Cardinal was pathetic. Stanford needed nine tries and nearly nine minutes before making a field goal, finishing the first half with more turnovers (11) than field goals (seven in 24 attempts). An 11-0 run at the end of the half gave Washington a 50-22 lead and gave Stanford no hope.

“We haven’t played like that (first half) in a long time,” Huskies coach Lorenzo Romar said.

At least one Husky fan – let’s hope there was only one – wasn’t entirely satisfied with the win. When the Huskies dared to give up seven unanswered points to reduce their lead to a mere 21 points midway through the second half, a leather-lunged man screamed, “C’mon, Huskies! Wake up!”

There is no truth to reports that the man was one of the Philadelphia Eagles football fans who once booed Santa Claus at a game.

Murray led the Huskies with 25 points and added four assists and two steals against Stanford. Murray also had 25 points in Washington’s regular-season win over the Cardinal. Chriss piled up 18 points and 10 rebounds. Both demonstrated why ESPN projects them to go in the first round of the NBA draft if they turn pro this year.

“He’s a really hard worker,” Murray said of Chriss. “He wants to work every single day.”

“There is not much Marquese can’t do on the basketball court,” Huskies guard Andrew Andrews said. “When you think of his position, that ‘4’ (power forward) position, you might think of someone that plays down low. But then you see a guy like him who is stepping out, hitting 3’s, who can take it off the glass, push the ball, who is also a good passer, plays above the rim.

“So I think he’s a special player. He helps us in so many ways. He protects the rim for us on the defensive end, but then he’s also getting steals.”

Chriss does struggle to avoid fouls. He drew four Wednesday to break the Pac-12 record of 126. Former Oregon State star Steve Johnson held the record since 1976-77.

The only potential negative to come out of Wednesday’s outcome is a quarterfinal showdown Thursday with top-seeded Oregon (12:10 p.m., Pac-12 Networks).

Eighth-ranked Oregon (25-6) is riding a five-game winning streak that includes an 86-73 home win over Washington in the only game between the teams. Both teams are loaded with athleticism and can score at will.

The Ducks are superior defensively, though Washington played quite well on defense Wednesday, particularly in the first half. The Huskies blocked seven shots, leaving them one shy of the Pac-12 record of 211.

“Great overall team,” Andrews said. “They have multiple players that can make plays for them. It’ll be another test for us defensively.”

“When we played them the first time,” Murray said, “I just felt like they were more aggressive than us. I mean, we played a good game.”

Oregon enjoyed a first-round bye. Of course, the Ducks probably worked up a better sweat at practice Wednesday than the Huskies did against Stanford (15-15). Dorian Pickens scored 17 points for the Cardinal, which is left hoping for an NIT bid.

Washington State’s sorry season came to a sorry end in an 80-56 loss to Colorado. The season was neatly summarized when 6-foot-10 Josh Hawkinson, WSU’s best player, left the ball hanging on the rim on a wide-open dunk attempt. Then he hung from the rim and was called for a technical foul.

Hawkinson did provide some welcome news when he announced he will return for his senior season. Hawkinson is scheduled to earn his management operations degree this summer and would have the option of transferring as a graduate.

“I’m not that type of person,” the former Shorewood High School star said. “I think some people might take the easy way out and want to leave.”

“It shows a tremendous amount of character and loyalty to his school,” coach Ernie Kent said.

Kent said the Cougars as a whole demonstrated character by continuing to work hard through all the losses. Kent said Colorado, playing for a possible NCAA tournament bid, had far more “energy and juice” than the Cougars.

WSU finished 9-22 with a 17-game losing streak. The school record is 18. The Cougars’ eighth consecutive loss in the tournament broke a record shared with Arizona State.

Kent said he has not decided if he will bring back all players, but he said no changes are planned on the coaching staff. The Cougars have signed two players to letters of intent to replace seniors Junior Longrus and Brett Boese, whom Hawkinson praised at length for their leadership.

An estimated 5,500 fans filled about half of the arena for the afternoon session’s two games. All 11 games are sold out for the four-day tournament.