The Broncos went to school on the Seahawks’ emphasis on defense, and won a Super Bowl. Except now they have no quarterback. Score Russell Wilson’s contract a bargain. 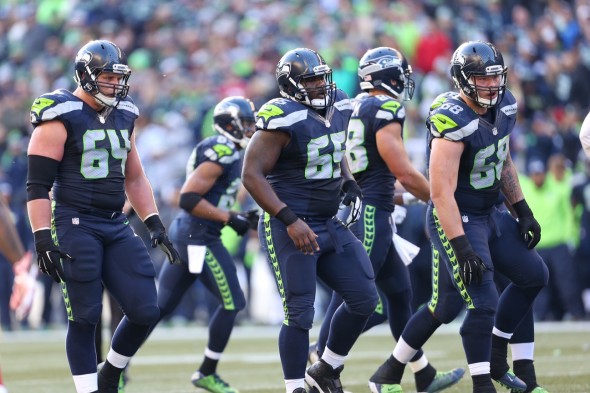 RG J.R. Sweezy (64) is gone, but C Patrick Lewis (65) and LG Justin Britt (68) return to a line that figured things out in the second half. / Drew McKenzie, Sportspress Northwest

The great thing about the first day of NFL free agency is that it’s like a grade school talent show. The least are the loudest. The audience squints hard to see the next Elvis, Beyonce or Bieber. Everyone is excited and nothing is conclusive.

But everyone hands out trophies when it should be participation ribbons.

Regarding the Seahawks’ position, they are happy to be the stage band, drawing courtesy applause.

They know one thing for certain: It’s good to have young Russell Wilson signed up as the franchise quarterback, and watch everyone else scramble to keep up.

After watching the Super Bowl champion Broncos lose quarterbacks Peyton Manning to retirement and Brock Osweiler to Houston in free agency, then try to say everything is fine, I’m reminded of a cat that flies head-long into a sliding glass door that’s closed.

Stunned and staggering, the cat nevertheless quickly cops an attitude: “Hey, I meant to do that.”

The Broncos did not mean to have tweety birds and stars circling their heads in early March. But there is general manager John Elway, with little X’s where his eyes should be, trying to fetch a QB from among Colin Kaepernick, Ryan Fitzpatrick and Robert Griffin III. He may end up with Brian Hoyer. Or Jamie Moyer.

Remember, this is the team where Tim Tebow flourished — for a memorable NFL nanosecond.

”We’ve now turned our attention to other options at quarterback and we are confident that we’ll find the right player and person for our team,” Elway said Wednesday. ”Our organization thanks Brock for his contributions and wishes him all the best.”

Yeah, right. The Broncos thought Osweiler was worth $16 million a year, and so offered. That he told them to drop dead, and took $18 million from the Texans, tells the world why the Seahawks were thrilled they buttoned up Wilson for $21 million a year earlier.

Wilson is a proven winner. Osweiler, 25, has seven starts and was benched in January for an injured 39-year-old.

Yet, it isn’t reasonable to conclude that the Broncos are in disarray. They are in much the same position as were the Seahawks, Patriots and every other NFL champion since the 1994 introduction of free agency — subject to wholesale predation, but not fated to collapse, necessarily.

The predation is happening to the Broncos at the position of highest vulnerability, but it isn’t a disaster. The Broncos won the Super Bowl with a passing attack that was 31st in the 32-team NFL. That’s two years after they had, with a slightly healthier Manning, the most productive offense in league history, yet were slaughtered by the Seahawks in the Super Bowl.

The humiliation turned out to be Elway’s come-to-Jesus moment as a GM. He knew if he was going to win his high-risk bet that an aging Manning could win a Super Bowl for Denver, he had to get one of those Seahawks-style defenses that smothers any offense in its path. So he did.

And Elway still mostly has that defense, including Von Miller, the franchise-tagged defensive end who was hurt and did not play in Super Bowl XLVIII. If the Broncos can find a serviceable but not necessarily starring QB, they are again credible contenders.

Which brings us back to what the Seahawks did Wednesday’s during free agency’s first 24 hours — attempted to hold serve on defense.

Coach Pete Carroll, who didn’t invent the idea but is the highest current practitioner, knows that a fast, efficient defense can keep a team in every game, year after year, while hoping the offense stumbles into a touchdown or two.

The Seahawks knew a year ago that LB Bruce Irvin, barring injury, was as good as gone when they informed him they would not pick up his fifth-year contract option that first-round draft picks get.

They were right. The Raiders gave him a deal averaging $9 million a year over four years. Irvin would have received $7.8 million in 2016 if the Seahawks picked up the option. So good for Irvin.

But three other starters on defense were free agents. The Seahawks moved quickly to secure the two youngest among them.

They struck a deal with Ahtyba Rubin, 29, whose productive first season in Seattle made expendable his running mate at defensive tackle, Brandon Mebane, 31. The longest tenured Seahawk and a much-admired guy in the locker room, Mebane went to the Chargers on a deal that paid him $13.5 million, including $5.5 million guaranteed. So good for Mebane.

He made $5.1 million in 2015 with the Seahawks, who likely would have offered him less to stay. Just before free agency began, Rubin accepted $12 million over three years. He likely will be paired with fourth-year player Jordan Hill in the middle of the line.

In the secondary, Jeremy Lane, 25, was the best available choice to fill the spot opposite Richard Sherman to play the position to Carroll’s specs. He drew $23 million over four years, with $11 million guaranteed, to plug a leak in the Legion of Boom.

So the Seahawks on defense have only to be concerned with the strongside LB position, which may get filled numerous ways, including a more prominent role for last year’s rookie, Frank Clark.

That leaves the rest of free agency and the draft to fix the next priority, the offensive line. The permutations for that are almost endless, which is helpful if the Seahawks have to replace both RG J.R. Sweezy and LT Russell Okung. But they have back three O-linemen — C Patrick Lewis, LG Justin Britt and RT Garry Gilliam — who were part of the hottest offense in the NFL in the season’s second half.

Filling those holes is work. But it is nothing like the heavy lifting going on for what seems like half the NFL to nail down a quality quarterback.  And Thursday afternoon, WR Jermaine Kearse returned to his hometown team.

So if you’re a 12 inclined toward fretting this time of year, feel free to pop a few chill pills. You’ll enjoy the show much more. No need to find the next Elvis.