Rookie Tony Alfaro, signed to a contract Wednesday, has work to do to be ready to take the pitch in league play, but injuries may conspire to force him onto the field before he’s ready. 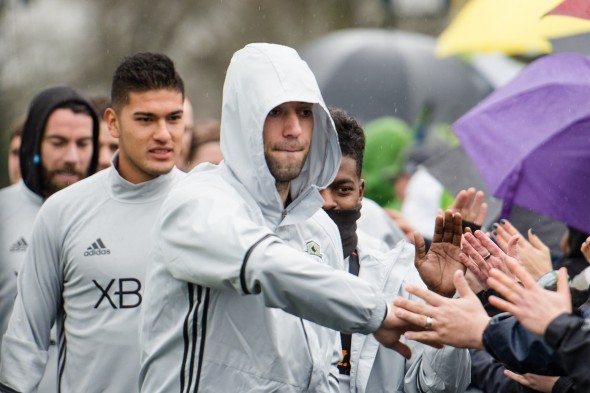 Rookie Tony Alfaro (second from left) has work to do to crack the Sounders lineup. / Jane Gershovich, Seattle Sounders FC

Attending high school in Santa Barbara, Tony Alfaro didn’t play club soccer. In the upper echelons of American soccer, making it to the big time is unusual without the visibility offered by traveling teams. Then again, Alfaro is unusual, too. The Sounders’ most recent signee was Seattle’s highest draft choice in the MLS SuperDraft, and now is working on his goal of becoming an MLS starter.

Even with the accolades, Alfaro was far from a lock to be drafted.

“My college coach and Sigi were close friends so he had mentioned to me,  ‘Hey look, they’re looking at you,’” Alfaro said Thursday. “Obviously nothing was for sure, but being at the combine, I was able to talk to the coaching staff from Seattle. I was able to get a better understanding of what they wanted.”

Between those conversations and Alfaro’s body of work, the California native was thrilled when he was draped in a Sounders scarf on the stage at the MLS SuperDraft Jan. 14.

The selection was a logical one. The Sounders liked his 6-foot-2 height and speed, and were in need of depth at center back. The opportunity to get younger, especially at center back, is crucial for Seattle, which had only four starters under 29 in a 1-0 loss to Sporting KC Sunday.

As with all of Seattle’s rookies, Schmid said Alfaro had work to do. In Alfaro’s case, while his ball-work was impressive, he needs development as a defender to be ready for league play.

“Coming in, I had heard a lot of things, (like) a lot of their rookies play with S2 for the first couple of years,” said Alfaro. “For me, my mindset is: Dream big and make my goals limitless. It doesn’t matter what (others) have done; my goal is to make the first team. I’m more than happy and humbled to be here.”

The last time the Sounders were forced to call up a young player early was the case of forward Andy Craven in the middle of the past summer, a time when the attacking unit was replete with injury and absences. Craven was quickly proven to be unready, and hasn’t stepped on the field in a major contest since he had a season-ending leg injury in July.

Rushing Alfaro on to the field may prove similarly disastrous for the player and the club, But with just two healthy center backs on the roster (Zach Scott and Chad Marshall, 35 and 31, respectively), Alfaro is one injury away from being called upon to contribute against Real Salt Lake (0-0-1) Saturday (1 p.m., JoeTV).

If Brad Evans can recover quickly from his shoulder injury (Schmid said he was doubtful to play Saturday), then Alfaro will benefit greatly from working closely with seasoned veteran center backs who can speed his development.

If not, Alfaro may wind up in over his head, leaving the door open for opponents to sink the Sounders into a deep hole early in the season.

The Sounders received some positive injury news Thursday. Midfielder Erik Friberg cleared concussion protocol and fully participated in practice, making him likely to play Saturday. Right back Tyrone Mears, who missed the season opener with a quad strain, also was a full go. Mears’ presence will be crucial for the back line, who are short on outside backs with Oniel Fisher serving a one-game suspension following his red card against Sporting KC.