Free agent punter Jon Ryan is returning to the Seahawks, while LT Russell Okung, the Seahawka’ last remaining starter who is undecided, will visit the Giants, Lions and 49ers. 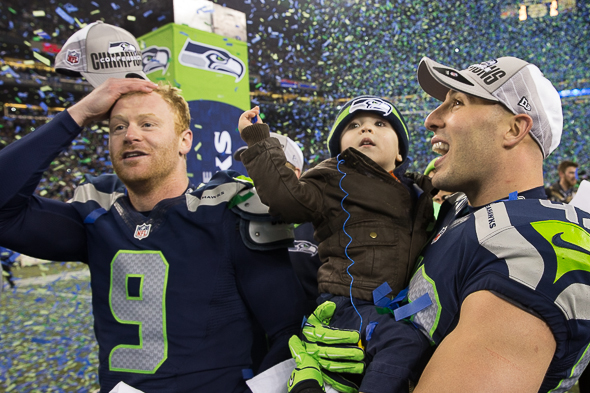 John Ryan i happy to be back with the Seahawks. / Drew McKenzie, Sportspress Northwest

Another free agent Seahawk is staying in Seattle — punter Jon Ryan tweeted Friday morning that he is returning, thanks to a deal worth up to $10 million, with $2.4 million guaranteed, according to NFL.com.

With the departure of Brandon Mebane to San Diego, Ryan, 34, is the longest-tenured Seahawk. His 2008 arrival in Seattle makes him the only player who pre-dates coach Pete Carroll.

Found out this morning that I will have the honor of playing in front of the greatest fans in the world for 4 more years. #12’s @Seahawks

Ryan, who also holds on field goals — from where he threw a touchdown pass to RT Garry Gilliam to jump-start the Seahawks’ win over Green Bay in the 2014 NFC Championship — is among the NFL’s best punters because he kicks well directionally as well as vertically, dropping balls frequently inside the opponent 20-yard line.

He holds most of the Seahawks career punting records, including the longest punt of 77 yards.

NFL.com reported that LT Russell Okung, the final starter on the Seahawks’ unrestricted free agent list who is undecided, will take visits this weekend with the Giants and Lions. The 49ers reportedly are also interested. It was reported earlier in the week by NFL.com that he received an”aggressive” offer from the Seahawks to stay.

Okung, 28, is representing himself in negotiations, with some assistance from his former agent. His effort is being watched by other NFL players to see whether the unusual maneuver is feasible.

Okung had a shoulder dislocation in the final playoff game against Carolina that required surgery last month and obviously needs to prove to prospective employers that he is healthy.

The Seahawks have lost RG J.R. Sweezy in free agency (Tampa Bay) and are reluctant to lose a second starter from a line that struggled mightily in the first half of the past season.

Okung’s return could mean that the only personnel change in the line would be the advancement of Mark Glowinski, a fourth-round draftee in 2015, to replace Sweezy.

NFL.com also reported that the Seahawks will get a visit from Steelers LT Kelvin Beachum.

A seventh-round draft pick in 2012 from Southern Methodist, he worked his way into a full-time starting job in 2014, but played just six games in 2015 before tearing an ACL. He’s considered among the top remaining unsigned free agent tackles, along with Okung.