The real reasons we care about NCAA hoops

The NCAA tournament seems hugely popular, but is it the basketball? The schools? The competition? Nah. It’s the brackets. The tourney draws double the wagers of the Super Bowl. 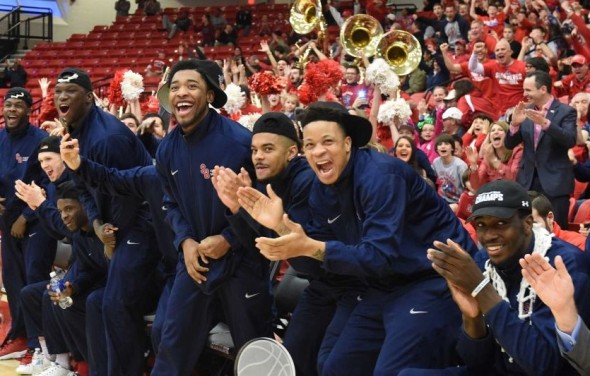 Maybe it’s because the only state school in the NCAA basketball tournament field is 11th-seeded Gonzaga. Maybe it’s because in the 10 years of the one-and-done rule forced upon colleges by the NBA — there’s no way for even the best programs to sustain season-long interest beyond the local fan base, because few know who anyone is, but do know the best will be gone in a short while.

Maybe it’s because the CBS selection show telecast Sunday stretched from one hour, which was already too long, to two bilious hours, apparently in order to unleash a cast of punditry in the hundreds (that included Charles Barkley, whom I normally enjoy, but he knows college basketball like Miley Cyrus knows the Iditarod). Fercripesake, it took 77 minutes for CBS to announce the final berths, even though someone had already tweeted out the selections before the show.

I grow a little weary of the NCAA tourney gluttony.

The tourney will have its inevitably delicious menu of buzzer-beaters, 12-seeds beating 5-seeds and the cheek-pinching of the Stony Brook Seawolves while saying, “wudgie, wudgie, wudgie!”

But the NCAA tournament seems to have a hollow core.

In no other American sport is the regular season followed so casually compared to the three-week postseason, when many go off-meds to participate in March Madness, whose visceral appeal has very little to do with the sport or the schools.

Occasionally I hear people still calling baseball the national pastime. No. that trite expression has long passed its expiration date, if it were ever true in the first place.

Other people try to seem enlightened by saying football has surpassed baseball as national pastime. Again, no. Sports may be a passion for many, but not a pastime.

We have only two widespread national pastimes:

Those two pursuits explain exactly why we enjoy March Madness.

The gambling, you understand. This Monday morning in offices, schools, factories, day care center and senior centers, someone is running around sticking into startled faces a copy of the NCAA tourney bracket and demanding participation via dollars.

Many participants who think krzyzewski is nothing more than a killer word for Scrabble triple-score will throw down, timidly, fearing they will be seen as an outcast, in the manner of a virgin in the Louisville basketball program.

Others who think they know something will fill out multiple brackets, because it provides a little emotional edge beyond a pure game of chance like, say, roulette. Although it’s rarely true.

That’s where renegade consumerism comes in. The tourney appeals in the way that shopping for something that we know will be finished off within three weeks tends to appeal. There’s little need to look beyond the shiny-sparkly fluff. So impulse rules. It’s a 64-team, blue-light special.

The net of these impulses is that gambling professionals estimate that more than $9 billion will be wagered on the tourney, or double what is bet on the Super Bowl. Because so many people who have minimal interest in college basketball and no interest in the schools nevertheless tune in, the tourney becomes a huge attraction for advertisers. These companies increasingly understand, except for live sports, almost nobody watches TV by appointment any more.

So advertisers will pay large coin for this rare, captive audience that typically will interrupt work schedules to pump fists at the images on TV, and stay for the ads.

In turn, that allows CBS and TNT to pay enormous fees to the NCAA for exclusive television and marketing rights. Those rights fees form the entire financial foundation of the NCAA, permitting its continued existence, in all its  bloated, unseemly, FIFA-lite glory.

More than 90 percent of the NCAA’s annual operating revenues come from the basketball rights — nearly $800 million annually, part of the $10.8 billion, 14-year deal the nets signed with the NCAA in 2006.

For nigh onto a hundred years now, we have been told that college athletes receive none of the proceeds from their skills in amusing us. We nod faux-somberly at that truth. But we don’t care, most of us; if we did, it would have changed.

Most of us don’t care about the schools, or the athletes, or the sport, or the competition for its own sake. We care about our brackets. That is all.

When you think about it, the scheme by the NCAA is diabolically brilliant. Doctor up the event with bands, cheerleaders and spittle-spraying coaches, and no one notices the irony: The only people who can’t gamble on it, nor make enough money off it to shop even for socks, are the participants, 99.8 percent of whom will not translate their experiences into careers in pro ball.

Just for fun, try something: Follow the tournament without a bracket that has stakes. Then let me know how it worked for you.