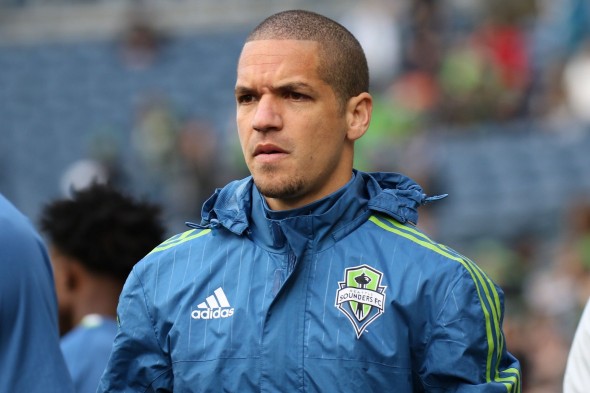 From the get-go, it just wasn’t going to be Seattle’s day. The Seattle Sounders gave up the game-winning goal due to a keeper error for the second game in a row in a 2-1 loss to Real Salt Lake at Rio Tinto Stadium Saturday. The Sounders limp home after being forced to use all three substitutes due to injury, as well as a late lineup scratch for starting keeper Stefan Frei.

Seattle (0-2-0) received its first bad news before kickoff, when Stefan Frei was removed from the starting lineup due to an elbow injury. Backup keeper Tyler Miller was called upon to make his first MLS start on his 23rd birthday. Hopefully the cake will leave a better taste than the following 90 minutes did.

The Sounders struck first in the 28th minute, when a series of promising attacks culminated in a Joevin Jones cross from the left side, reaching the foot of Nelson Valdez. Valdez’ flick was saved by keeper Nick Rimando, but the rebound fell to a waiting Osvaldo Alonso, who scored his first league goal since July 2012, a 96-game span for the defensive midfielder.

Real Salt Lake (1-0-1) responded shortly before halftime. In the 43rd minute, Joao Plata swung in a corner kick from the right side. Nigerian midfielder Sunday “Sunny” Obayan broke toward the ball away from Clint Dempsey, smashing it with his head into the upper right ninety past a rooted Miller to level the score.

The second half was a tense back and forth battle, but neither side generated promising scoring chances. Then, in the 83rd minute, Salt Lake’s Juan Martinez chipped a high cross in front of the net from the goal line. Miller stood beneath, waiting to grab it. But as he went up, center back Jámison Olave sprinted in and nudged the ball with his forehead before it reached Miller’s grasp, dropping into the net to the delight of the 19,282 in the stands.

Other than that, coach Sigi Schmid said he thought Miller played well in his debut.

“He made a great save early in the game,” said Schmid, referring to a diving stop to turn away a Plata effort in the 23rd minute. “He got caught on the cross, Olave’s a big guy, and he got a great jump on it. That’s it, it’s over.

“I’m really concerned about (conceding late in the half) from the standpoint of we have to finish it out better. A lot of it’s about the attitude we have on the field and guys stepping up and saying, ‘Hey, this isn’t going to happen.’”

Schmid’s other concern is whether there is enough medical tape left at Starfire to stitch together a team for the coming weeks.

Already without center backs Román Torres and Brad Evans, Seattle had the situation worsen when midfielder Erik Friberg received a yellow card for a reckless challenge on Jordan Allen in the 16th minute, spraining his right knee in the process. Friberg, who sat out week one’s loss to Sporting Kansas City with a concussion, was soon replaced by Cristian Roldan. His return from injury lasted 18 minutes.

Rookie Jordan Morris was the next to fall in the 76th minute, after an accidental head-to-head collision with Chris Wingert left the 21-year-old clutching his temple on the ground. Morris was replaced by Darwin Jones, in what Schmid described as a precaution.

Finally, already into stoppage time, Valdez went down in Real Salt Lake’s box, clutching his thigh. He was replaced by Aaron Kovar, and limped into the locker room with an ice bag taped to his leg.

Two games in, the injuries are piling up. A week’s worth of rehab will be needed to get a lineup ready to take the pitch against Vancouver in the first Cascadia Cup clash of the season March 19 (7 p.m., JoeTV).

Seattle is under pressure to grab points early, before the Copa America Centenario in June and the Rio Olympics draw away healthy talent for national team duties. A two-loss start to the season doesn’t spell doom, but the uphill climb to the MLS Cup just became steeper.