Thiel: The Seattle battle for Occidental is on

A City Council hearing Tuesday will hear both sides argue the value of Occidental Avenue. Meanwhile, KeyArena keeps getting dressed up by some, but has no place to go. 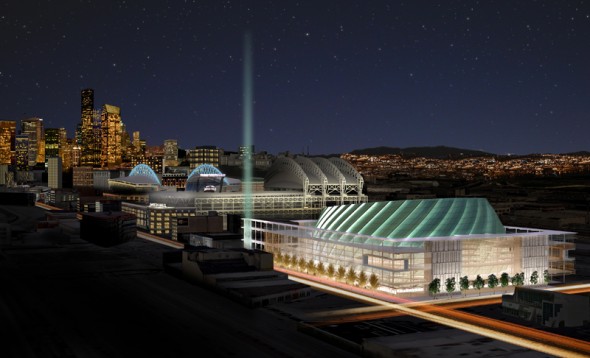 The Seattle City Council has a public meeting at 5:30 p.m. Tuesday to hear supporters and opponents talk about whether to vacate a portion of Occidental Avenue that presumably would trigger movement on Chris Hansen’s proposed arena project in Sodo. Not on the agenda, but figuratively looming in the room, will be the subject of  whether KeyArena can be remodeled as an alternative solution for NBA/NHL franchises.

A report commissioned by the council and released the past May by AECOM, an industry leader in the business of arena-building, said that an option to remake the Key suitable for big-time basketball/hockey could be done for $285 million.

The report said by turning the arena floor diagonally, seating capacity could be set at  15,909 for hockey and 17,127 for basketball, using seat widths for most levels of 19 inches (feel free to put a tape measure to the sitting backside of a spouse/colleague; after the headache goes away from the punch/slap, judge for yourself).

This option would make the Key the second-smallest capacity arena in both sports. That’s not necessarily a fatal shortcoming by itself. But in listening to the retired deputy director of the Seattle Center, the remodel of a remodel is another attempt to stretch the building beyond its functional utility for big-time pro sports.

“I think it’s a lot of smoke and mirrors,” said Terry McLaughlin, who served the Center for nine years before before becoming executive vice-president of the Sonics for 12 years, until their 2008 departure. “The whole discussion is based on a premise that the AECOM study and its conclusions would be approved by the NBA and NHL. That hasn’t happened.

“I can’t imagine a league approving it. So the whole argument is specious.”

McLaughlin says up front he hasn’t read the AECOM report. But after 21 years as a city-government insider, then as a private lessee, there’s probably no one in town who knows more intimately the physical and financial ins and outs of a building that opened in 1962 for the Seattle World’s Fair.

“I’m as big a Key fan as there is,” he said, “but if (the NBA and NHL) are not coming to town, there’s no reason to consider” a remodel for big-time pro sports.

“You can’t do it with the shape of the bowl in the Key. Remember, when we did the remodel (in 1995), we were not trying to get hockey, we were trying to save basketball. To have hockey, you have to have a much bigger footprint and capacity. You have to blow (the Key) up and start over.”

Answering the “if” in McLaughlin’s point was at the heart of the council’s pursuit of the report, which was mandated by a provision in the memorandum of understanding signed among the city, King County and Hansen in 2012. The council is charged with keeping the Key and the Center solvent regardless of the fate of Hansen’s project.

“If” the Sodo arena doesn’t happen, then what?

The council pursued the report after the public comment period closed in 2013 for the environmental impact review required by state law for Hansen’s proposal. AECOM’s take on the Key drew no public attention from the council, a situation described by a Feb. 13 Seattle Times story as “brushing off” its conclusions on the remodel option because it contradicted the EIS outcome. The EIS found no environmental reason to halt Hansen’s plan.

But if the council was seen giving public weight to the AECOM report as an alternative to Sodo, Hansen could have accused the city of deliberately undermining the MOU. However, should the MOU expire in November 2017 with no Sodo arena underway, the council has the report upon which to help make new decisions about the Key.

Until the MOU’s expiration, the council is obliged to consider fairly its partner’s next step — Hansen’s request for a street vacation. Tuesday is the first of two public hearings on the matter. No council action will be taken until, at the earliest, a scheduled full-council meeting April 25. But the action can be postponed.

Which may happen. Opposition to the street vacation is well-organized and already under way.

Tuesday, a group of 36 members of the Legislature, from both houses and both parties, signed a letter to the city council urging it to not vacate Occidental, claiming that the arena’s proximity to the port “could have devastating effects” on freight mobility.

Additionally, Peter Goldman, an environmental attorney who represents the International Longshore and Warehouse Union (ILWU) Local 19, which opposes the Sodo project on the same grounds — congestion around the port — wrote a five-page memo to the council and Mayor Ed Murray March 3. In it, he argued that there is no requirement in the MOU that a street vacation has to occur now, nor at any time prior to receipt of final documents by the council that state an NBA team will come to Seattle.

Voting to vacate prior to having proof of a team, Goldman wrote, would violate the State Environmental Policy Act (SEPA).

Since Hansen isn’t getting an NBA team in the foreseeable future, his hopes rest for the moment on finding an NHL team, via expansion or relocation, whose owner is willing to be an equity partner in the arena construction. But according to a source who has talked with Hansen, no one has stepped forward.

It’s reasonable to speculate that a prospective NHL owner would want to wait until the project finally gets some runway. But that reduces the problem to the chicken-or-egg debate of which comes first: A team or a street vacation? The suspicion here is that a judge may be enlisted to decide.

Regarding the option of a fresh remodel of the 21-year-old Key configuration, McLaughlin described what is often forgotten: Any remodel is required to keep the buttresses that suspend the roof. That limitation keeps the arena footprint too small — at its current 368,000 square feet, it is half the size of the average arena — for modern pro sports needs.

After Clay Bennett bought the Sonics in 2006 but before the team left, McLaughlin said the city commissioned a study similar to AECOM’s that concluded a basketball-only remodel could be done for $250 million to $300 million. Steve Ballmer, still the Microsoft strongman, and other business people agreed to put up $150 million in private funds. But the remaining public share had to come from a tax-revenue diversion that the state Legislature refused to consider. End of remodel plan. End of Sonics.

And here we are again, eight years later, considering a $285 million remodel for both sports and no Ballmer.

“I don’t see it,” McLaughlin said.

A complete demolition of the the Key for a new structure would cost much more than the  $285 million the city doesn’t have anyway. At least the Key today produces a small cash surplus for Center operations, and has done so annually since Bennett paid off the remaining construction debt to get out of the lease.

Hansen reiterated Monday during an interview with 950 KJR radio that he considered a Key remodel in 2011 and said no, but that it could serve as a temporary home for a team once the Sodo project was underway.

“We did look at it,” Hansen said. “The idea that it could be adequately renovated for under $300 million is ludicrous.

“You need Key Arena to play in for two years while we build the new arena.”

Even if Hansen were to get the vacation and secure a hockey partner, that would not necessarily start the project. He must get the mayor and council to agree to rewrite the MOU to put a hockey franchise ahead of the return of the NBA.

Murray and some council members and staffers are more skeptical about the success of an NHL team, whose market value is unproven in Seattle. While hockey adherents would suggest that is ridiculous, many basketball adherents still can’t get over the fact that the NBA pulled a Sonics franchise out of Seattle after 41 mostly successful years.

Anyone following this saga needs to keep in mind that pro sports leagues are monopoly operations that will manipulate fans’ passions in the best interests of the industry. Failure to capitulate to their demands will cause the leagues to relocate. The pro sports industry cares nothing about fans’ dismay, because new fans can always be mined.

If you are new to Seattle in the eight years since the Sonics have been gone, read up on the current experience by sports fans in St. Louis after the NFL permitted the Rams to decamp to Los Angeles. You will understand the phrase reckless disregard.

Meanwhile in Seattle, opponents of the Sodo arena also have failed to distinguish themselves.

The letter-writing legislators, along with the Times editorialists who termed the potential loss of Occidental “irreplaceable,” should take 17 minutes to watch this time-lapse video posted last week by the crew who made the remarkable documentary “Sonicsgate.”

Go ahead, count the semi-truck trailers on Occidental:

As a final, historical note in this primer ahead of the council hearing, it was in 1996 that the Mariners, flush with $380 million in public funding for a stadium, asked the city for a street vacation in order to build what became Safeco Field.

You’ll find that part of Occidental under second base.