The Seahawks have scored big and fallen flat in free agency over the past two decades. Here are their five best signings, their five worst, and five memorable jilt jobs. 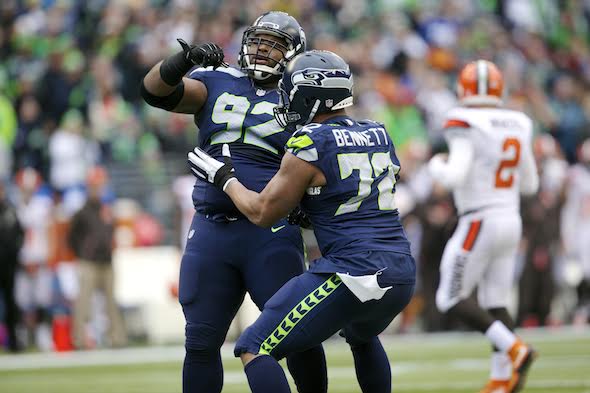 Michael Bennett (72) has 25.5 sacks since signing with the Seahawks three years ago. / Drew McKenzie, Sportspress Northwest

The NFL’s free agency signing period, in progress, is always a source of great angst for the 12s, who sweat that the Seahawks’ defections will not be balanced by gains. During the Pete Carroll era (since 2010), the comings more than offset the goings, evidenced by five playoff appearances, including two in the Super Bowl. But it has not always been thus.

More often than not in the first decade of modern free agency, Lucy pulled the football on the Seahawks.

What follows are three lists: The five best free-agent signings made by Seattle since 1993, the five worst, and the five biggest jilt jobs.

Engram spent the first five years of his career with the Bears before joining the Seahawks on a one-year, $477,000 contract in 2001. A great bargain: Engram played 109 games, starting 67. He caught 399 passes for 4,859 yards and 18 touchdowns, averaging 12.2 yards per catch. Engram had his best year in 2007 when he established the franchise record with 94 receptions (broken by Doug Baldwin’s 98 last season).

A Washington State product, Tobeck signed after spending his first six seasons with the Atlanta Falcons. With Seattle, he played in 92 games, starting 88, including Super Bowl XL. Tobeck was an integral part of an offensive line — the best the Seahawks had — that helped RB Shaun Alexander win the league’s MVP award in 2005.

The Seahawks plucked Avril from the Detroit Lions on a two-year year deal worth $13 million. Avril made only two starts in his first year with the club, but has started 32 consecutive regular-season games since, recording 14 sacks (nine last year) over that span. Slightly more than a year ago, the Seahawks extended Avril for four years, GM John Schneider saying, “He’s absolutely vital to what we’re building on the defensive side of the ball.”

Because contracts are not guaranteed in the NFL, free agents are often short-timers. Not this guy. The Seahawks lured the Pro Bowl linebacker from the Pittsburgh Steelers by giving him a six-year contract that featured a $7 million signing bonus, largest in club history at the time. Brown made good, playing in Seattle for eight years, finishing his career ranked among the club’s all-time top 10 in tackles (744), sacks (48) and yards lost on sacks (284.5).

The Seahawks lured Bennett away from Tampa Bay on a one-year, $5 million deal. They have extended him once and are likely to do so again, or at least sweeten his current deal to keep him happy. Bennett has recorded 25.5 sacks in his three seasons, earned one Pro Bowl berth, and is the most disruptive player on a defensive line that helped the Seahawks lead the NFL in fewest points allowed for four consecutive seasons.

The Seahawks signed Houshmadzadeh, a former Cincinnati Bengal, to a five-year, $40 million contract following the 2008 season. Although he put up decent numbers for Seattle in 2009 (79 catches, 911 yards), he scored three touchdowns. Houshmandzadeh made it through Carroll’s first Seattle training camp in 2010, but was cut Sept. 4. That dismissal cost the Seahawks $6.15 million. Houshmandzadeh washed out in Baltimore and Oakland and retired in 2011.

A defensive tackle, Woodard signed a five-year, $15 million contract and then did almost nothing for the next two years. He made 12 starts in 2003 and just 28 for his Seattle tenure, which ended in 2004 when the Seahawks cut him.

Odomes starred on Buffalo Bills teams that made four Super Bowls, but after the Seahawks lavished a $2.2 million signing bonus on the Pro Bowl defensive back, he never played a down. He injured his right knee in a pick-up basketball game, then after serious repair surgery, blew out the same knee in mini-camp.

The Seahawks handed Williams, a free agent from Philadelphia, a three-year deal worth $18 million ($3.5 million signing bonus) and got back little value. The veteran corner made 10 starts opposite Richard Sherman and struggled as opposing quarterbacks picked on him relentlessly – and successfully. “You have to stop big plays from happening,” Carroll said after releasing Williams. “You’re not worth a darn on defense if you’re giving up a bunch of explosive plays.”

The Seahawks brought Flynn from Green Bay to be their starting quarterback, agreeing to pay $19.5 million over three years. But Flynn appeared in just three games (all mop-up jobs) after rookie Russell Wilson clobbered him in a much-hyped quarterback competition in training camp. The Seahawks held on to Flynn until April 1, 2013 when they traded him to Oakland for a fifth-round pick in 2014 and a conditional pick in 2015. After subsequent failures with Buffalo and Green Bay, Flynn bowed out of the league in 2014.

Tate bolted the Seahawks for Detroit three days after the free-agent signing period commenced, inking a five-year deal that guaranteed him $13 million – way more than the Seahawks could afford, given their salary-cap restrictions. Tate, Seattle’s top receiver and one of the best punt returners in the league, has caught 109 passes and made one Pro Bowl appearances since his exit from Seattle.

The Seahawks, specifically coach/GM Mike Holmgren, decided against re-signing the huge defensive tackle even before Adams let it be known he wanted $3 million per year. Seattle’s 1994 No. 1 draft pick eventually signed with Baltimore, and helped lead the most dominating defense in the league to a victory in Super Bowl XXXV. Adams made all three of his Pro Bowl appearances after leaving the Seahawks.

The Seahawks lost their starting center when Mawae accepted a five-year, $17 million offer from the New York Jets that included a $5 million signing bonus, making him the NFL’s highest-paid center at the time. Re-signing Mawae had been a priority for the Seahawks, but they could not match the Jets. Mawae played in six Pro Bowls after departing Seattle and had a 14-year career with three teams through 2007.

Seattle’s first-round draft choice in 1997 and a Pro Bowl cornerback in 1998, Springs played seven years before jumping to the Washington Redskins for $30 million over six years. It wasn’t just the money that lured Springs, a D.C. native: “Playing up there in the Pacific Northwest,” he said, “is like playing in Egypt, it’s so far away.”

One of Seattle’s two first-round draft choices in 2001, Hutchinson was voted to two All-Pro teams in his first five years. Given that, and given that he helped form the best left-side offensive line tandem in the league with tackle Walter Jones, Hutchinson wanted a top-shelf contract extension. The Seahawks wouldn’t do it. Rather than designating him a franchise player for a one-year contract, the Seahawks tagged him a “transition” player, making him vulnerable to free agent offers. That opened the door to the Minnesota Vikings, whose offer of seven years and $49 million made him the game’s highest-paid guard. Hutchinson jumped in what turned out to be one of the largest screw-ups in Seahawks history.