Opponents and proponents of the Sodo arena project had their time in front of the City Council Tuesday. Each side had a point that neither could counter. 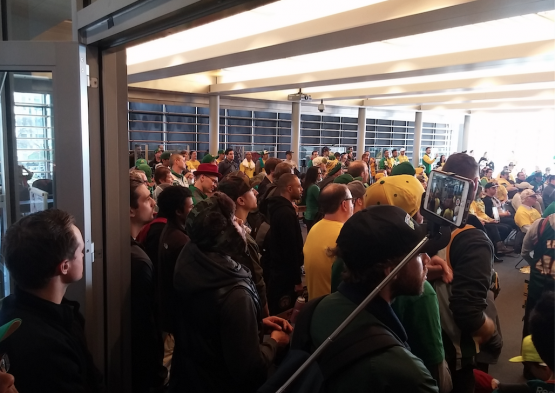 While much of the rest of the nation Tuesday night was grieving or cheering whomever they thought was going to run or ruin America, a chunk of Seattle was intensely devoted to the profound decision of whether to vacate a couple blocks of a commercial street.

Seattle had to feel good about having perspective and priorities. At least the discussion never descended into something as vulgar and demeaning as a presidential debate.

Supporters of Chris Hansen’s Sodo arena crowded shoulder-to-shoulder with opponents of the project, making for standing room only in council chambers at City Hall, which for most meetings could be done in the nude and few would notice.

But, hey, this was sports. Move aside, crime, homelessness, city budgets and other trivial matters.

At issue at this public hearing in front of all nine members of the sustainability and transportation committee — you think a pol would miss showing up in front of this crowd and its TV cameras? — was whether to vacate a bit of Occidental Avenue to make way for the arena, as was done 20 years ago for the Mariners stadium and years earlier for the late Kingdome, where the Clink now resides.

Nothing was scheduled to be decided; it was merely a time for members of the public to vent, two minutes per speaker. Council member Mike O’Brien chaired the event and had people sign up pro and con, so he could alternate views.

Arena supporters — who gathered an hour earlier a floor below for a loud rally that made sure city workers knew they were there — seemed to have a numerical edge. But burly members of the longshore union were out in force. If a fight broke out, I knew where the smart money was going.

But in the first hour, nothing close to confrontation was in the air. A few shouts of contradiction, a few boos, but civic decorum, in the Seattle tradition, prevailed.

The sides mostly stuck to the script that has grown familiar since 2012, when Seattle native Hansen, the city and King County struck a five-year deal to build a $490 million arena. The plan is mostly privately funded, but asks for $200 million in municipal bonds to be paid back. That invites the need for public permission.

At risk of over-simplification, arguments Tuesday can be summarized this way:

It is a peculiar standoff of non-delivery.

The chief opposition was supplied by the Port of Seattle’s commissioners, staffers and the longshore union members, who feel threatened by the gentrification of Seattle’s maritime/industrial neighborhood that has been in a losing battle for years with sports stadiums. A third strike, they seem to suggest, and they’re mostly out of business.

Except it’s hard to prove the theoretical. None of buildings eliminated by the proposal hold many jobs that couldn’t be relocated. Occidental itself, according to the project’s environmental impact statement, as well as some recent media documentation, carries very little port traffic.

On the proponents’ side, Hansen has yet to find either a hockey or a basketball team that would fulfill the requirement in the memorandum of understanding for bonds to be issued and construction to begin.

Little on the NBA side, in terms of relocation or expansion, is publicly visible. The NHL, for all its urgency to move first into the Seattle marketplace, can’t seem to find a billionaire to own a team and partner with Hansen in the private side of arena construction.

It’s a familiar one.

The only thing new since the last public hearings on the topic was the introduction of a report commissioned by the city council that said, for $285 million, it seems possible to remodel KeyArena to accommodate both pro sports teams.

The only problem is, the city doesn’t have a spare $285 million, and wouldn’t dare ask voters for it, especially since the costs likely will be much higher. Nor is Hansen, or any  private developer, interested in investing in a building on public land, as well as for a host of other reasons.

The port people were thrilled with the study by AECOM because it suggested an alternative that wasn’t considered by the EIS. But the report wasn’t taken seriously by the council because it can’t be seen opposing its partner. More importantly, there is no practical way to fund it, even if a hockey owner was found to share the second-smallest arena in pro sports.

It’s doubtful the council heard much that it didn’t already know. The council is obligated to respond to Hansen’s request for vacation, but it does have the option of granting it conditionally upon securing a team. But that’s barely a half-step, and pretty much where the project stands anyway.

In fact, deferring the decision is what longshore union attorney Peter Goldman told the council.

“A vote to defer,” he said, “does not hurt the arena or Sonics fans.”

What it does do is slow the project while speeding the calendar toward expiration of the  MOU in November 2017.

Knowing that politicians tend to take the path of least resistance, that may be the likeliest outcome of this phase of the project.